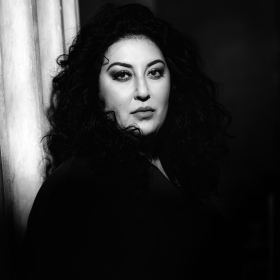 Georgian mezzo-soprano, she is recognised internationally as one of the leading artists of our day. Her career was launched in a spectacular overnight coup de théâtre in 2009, when Daniel Barenboim invited her to open the La Scala season as the title role in a much-publicised new production of Carmen, with Jonas Kaufmann as Don José. This performance marked her debut in the role and was televised all over the world.

She studied piano at the Mukhran Machavariani School and singing at the Vano-Sarajishvili Conservatory. She received a scholarship from the President of Georgia, Mikheil Saakashvili, and in 2007 she won the Paata Burchuladze Prize. While still a student at the conservatory, she debuted at the Opera in Tbilisi as Maddalena in Rigoletto and as Olga in Eugene Onegin, subsequently joining the ensemble of the theatre in the fall of 2006.

Much loved by the Greek public, she returns for the third time to the Greek National Opera. In July 2018 she sang to great acclaim the role of Carmen at the Odeon of Herodes Atticus, while in July 2020 she gave an amazing recital at the Roman Agora, Athens.