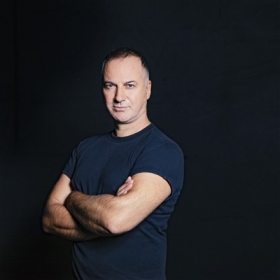 "It is important to know why one chooses this silent language to express oneself. To know that the discovery of a person is conducted through the body, by studying its uniqueness. To know why one chooses to pursue this lonely yet precious career on the stage, travelling into the furthest reaches of oneself, into areas untapped by everyday life! Beautiful, divine, magical… Never forget to be a student!"

He studied at the R. Manou Professional Dance School, the State School of Dance in Athens (under Yiannis Metsis) and the Hamburg Opera (under Truman Finney). He joined the English National Ballet and performed at the London Coliseum, the Kennedy Centre in Washington and NewYork’s Metropolitan Opera House. Productions included Makarova’s Swan Lake, Harald Landers’ ETUDES, Ronald Hynd’s Coppelia, John Cranko’s Onegin and Ashton’s Romeo and Juliet. Other works included Peter Schauffus’ productions of Napoli, The Nutcracker and La Sylphide in addition to Bejart’s Bolero and MacMillan’s Anastasia. From 1990 to 2012 he was a Principal of Greek National Opera Ballet. His principal roles in Greece have included A Midsummer Night Dream, Les Sylphides, La Bayadere, Petrushka, Romeo and Juliet, Zorba, Swan Lake, Don Quixote, Giselle, Le Corsaire and The Sleeping Beauty. He has worked with many renowned choreographers including Mandafounis, De Pian, Spyratou, Metsis, Neumeier, Cassado, Van Dantzig, Lorca Massine and Carole Armitage. In 2000 he received the Best Dancer Award by the Greek Ministry of Culture. Most recently he acted as Assistant Director to Lynn Seymour during her tenure as Ballet Director of the GNO. He was the publisher of dance magazine “En Horo”. He is the Director of GNO Professional Ballet School and Deputy Director of GNO Ballet. He teaches ballet class, Pas de deux and repertory.
BACK