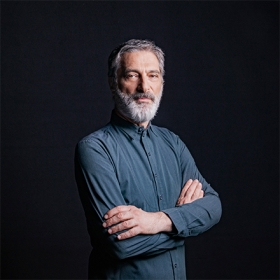 Greek National Opera’s Artistic Director, Giorgos Koumendakis, born in Rethymno, Crete, in 1959, is one of the most gifted and versatile Greek composers. Apart from his numerous pieces of symphonic and chamber music, a large part of his artistic career has been devoted to composing music for the performing arts (theatre, cinema, dance, opera, installations).

He has composed and presented four operas, among which stands out the two-act opera The Murderess (2014, to a libretto by Yannis Svolos, based on Alexandros Papadiamantis' ‘social novella’ under the same title). Commissioned by the Greek National Opera, this work combines the Greek musical tradition with the genre’s contemporary European identity.

Koumendakis’ distinctions date back to 1985, when he was chosen by György Ligeti to compose Symmolpa V. A few months later, he participated in the Venice Biennale. In 1987, he collaborated for the first time with the renowned French ensemble for contemporary music ‘Ensemble InterContemporain’, thus inaugurating an international career that led, in 1992, to the Prix de Rome, an honorary scholarship entailing a year of creative residency at the French Academy in Rome (Villa Medici).
In the same year began his long-standing collaboration with choreographer-director Dimitris Papaioannou and the ‘Edafos Dance Theatre’, which culminated in the opening and closing ceremonies of the Athens 2004 Olympic Games, where Koumendakis served as music director, composer, and author of the musical scenario.

He has collaborated with leading figures in the fields of theatre, opera, and dance, such as Karolos Koun, Stefanos Lazaridis, Yannis Houvardas, Roula Pateraki and Rallou Manou.
He has also served as artistic director of the ‘Nikos Skalkotas’ ensemble, the ‘Kyklos Ensemble’, and the Rethymno Rennaissance Festival, as well as the artistic programme manager for the Cultural Foundation of Tinos.

From 2015 to February 2017, he worked as artistic programme manager of the Greek National Opera’s Alternative Stage, planning innovative programmes and productions based on artistic, educational, and social criteria.