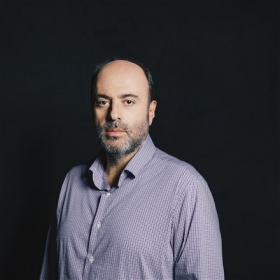 Born on Cephalonia, he started studying music in Patras and continued at the Zoltán Kodály Institute of the Franz Liszt Academy in Budapest (diploma with distinction in chorus direction, Peter Erdei’s class). In 2001-12 as a teacher at the Municipal Conservatory of Patras he created a model class for choral reading, without music instruments, based on the Kodály pedagogical method. He founded and directed the Chorus of Cephalonia (1993), Μusica Nova of Patras (2000) and the professional Chamber Chorus of the Municipal Conservatory of Patras, with which he presented many premieres of Greek and foreign composers’ works. Since 2012, and following an international competition, he is the master of Greek National Opera Chorus, with which he has presented more than 240 opera performances. Moreover, he conducts oratorios, liturgies and motets of pre-classical and classical period and more than 250 choral works (a cappella, Renaissance and 20th century).