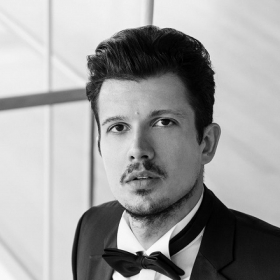 Greek bass-baritone, he started music at the age of five studying piano and advanced music theory. He took his diploma under Martha Arapi in 2010. His love for opera increased while participating in the choruses of the Greek National Opera and the Hellenic Broadcasting Corporation. He continued his studies in the USA (City University, New York, with a scholarship from the State Scholarships Foundation, Athens), where he began his soloist career singing, among others, Dr Cajus (The Merry Wives of Windsor) and Dr Grenvil (La traviata) at the Delaware Valley Opera, as well as Colline (La bohème) and Figaro (Le nozze di Figaro) at the Regina Opera. He completed his studies at the Music Academy of Würzburg under Cheryl Studer. During 2016/17 artistic season he made his debut with the Opéra national du Rhin as a member of the Opera Studio. Since 2018 he has been working with the GNO in such productions as Ζ, The Princess and the Pea, La sonnanbula, Don Carlo, Europeras, Madama Butterfly, The Magic Pillows, etc. He is a PhD Candidate at the Department of Music Studies, National and Kapodi- strian University of Athens (Acoustics of singing voice).