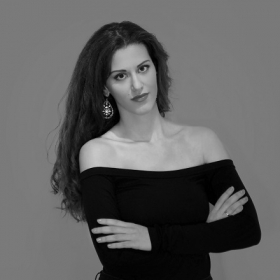 Greek soprano, she was born in Athens. She studied voice with Martha Arapi (diploma with honours), harmony (diploma), as well as musicology at the Department of Music Studies of the National and Kapodistrian University of Athens. She started cooperating with the Greek National Opera in 2013 at the children’s opera Beware! The Prince is Messy by Nikos Kypourgos. Since then, she has sung Third apparition (Macbeth), Delcharo (The Murderess by Giorgos Koumendakis), Papagena (Die Zauberflöte), Barbarina (Le nozze di Figaro), Lisa (La sonnambula), Adele (Die Fledermaus) and Nightingale (The Emperor’s Nightingale by Lena Platonos). She has sung in prestigious halls such as the Carnegie Hall, New York, Regina Coeli by Mozart, Chichester Psalms by Leonard Bernstein, Serenade to Music by Ralph Vaughan Williams and Choral Fantasy by Beethoven. She has been awarded in international competitions such as Marie Kraja International Singing Competition (Singer of the future award) and Hariclea Darclée International Voice Competition (Prize of excellence).