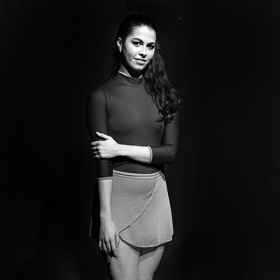 Born in Madrid, Spain, she studied at the Conservatory of A Coruña and continued at the Royal Conservatory of Dance Mariemma and at the Victor Ullate Ballet School in Madrid. Her professional career started with the Spanish National Dance Company,  performing roles in such works as Don Quixote and The Nutcracker in theatres like Teatro Real and Teatro de la Zarzuela in Madrid, Teatro de la Maestranza in Seville and Grad Teatre del Liceu in Barcelona. She continued at the New English Ballet Theatre in London dancing works of such choreographers as Ruth Brill, Georgie Rose, Erico Montes, Valentino Zucchetti, Peter Leung and Daniela Cardim. Moreover, she danced in the Swan Lake with the Birmingham Royal Ballet. During 2020/21 artistic season she became a member of the Corps de Ballet of the Greek National Opera.