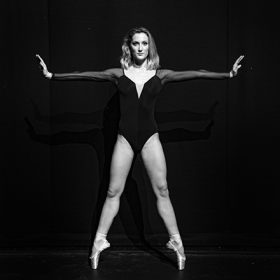 She was born and raised in Larissa. From a very young age she started rhythmic gymnastics reaching the championship level, while at the age of twelve she started classical ballet at the Municipal Ballet School of Larissa, in the selected department of beginners under Gesh Michov, the artistic director of the school. In 2017, after an audition, she was accepted to the Dutch National Ballet Academy, while in the same year she began her studies at the Professional Dance School of the Greek National Opera. During her studies she participated in performances of the school in collaboration with renowned choreographers and teachers such as Daphnis Kokkinos, Konstantinos Rigos, Maria Kousouni and others. She graduated with honors in 2020, while after an audition she was accepted to the Greek National Opera Ballet as a member of the Corps de ballet.