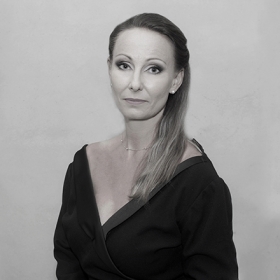 German mezzo-soprano, she grew up in a musical family and took her first music lessons from her pianist mother. She studied musical at the Janáček Academy of Music and Performing Arts in Brno, Czech Republic, and classical song at the Bratislava Conservatory, graduating with a diploma with honors. She came to Greece in 2003, where she attended voice courses with Verena Keller, Christa Ludwig, Claudia Visca and Antonis Kontogeorgiou (oratorio, Lied). In 2004, she appeared in a television program, singing songs by Greek composer Charis Vrontos. In Greece she has worked with the Chorus of the Public Power Corporation, the ensemble “Women’s Voices”, the Piraeus Philharmonic, the Glyfada Philharmonic, etc. She sang in the premiere of George Seferis’ Sterna with music by Christos Giannoulis at the Foyer of Olympia Theatre (Greek National Opera, 2012). Also, she has appeared in concerts in Germany, Czech Republic, Slovakia and Croatia. Since 2008 she has been a permanent member of the Chorus of the Greek National Opera.