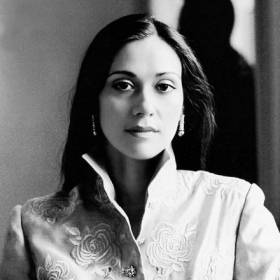 Mezzo-soprano, she was born in Tashkent. She studied at the Petro Tchaikovsky National Music Academy of Ukraine in Kiev. From 1997 till 2001 she cooperated with the lyric theatres of Prague, Brno, Ostrava, and since 2001 she has been cooperating with the Greek National Opera. She has sung at the Megaron – The Athens Concert Hall, Thessaloniki Concert Hall, Theatre of ancient Corinth, Odeon of Herodes Atticus, as well as in the USA, Canada, France, Spain, Austria, Germany, Japan, Slovakia and Poland. She has cooperated with leading artists such as Renata Scotto, Luciana Serra, Daniela Barcellona, Dimitri Kavrakos, Dimitra Theodossiou, as well as with prestigious conductors and directors. Her repertoire includes, among others, leading roles in such operas as The Queen of Spades, Don Carlo, Samson et Dalila, Il trovatore, Rigoletto, Le Siège de Corinthe, The Tsar’s Bride, Carmen and Aida.