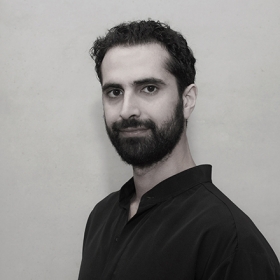 Baritone,  he was born in Athens. Along with his studies at the School of Philosophy (UOA), in 2000 he started his studies in monody, obtaining his diploma with honors (2008). Among his teachers was renowned tenor G. Zervanos. He collaborated with the GNO Children's Stage (Offenbach's Orpheus, Rouggeri, 2005/06). He participated in GNO operas as additional chorist, was a member of the Hellenic Broadcasting Corporation's Choir (2006-2011), in productions in Greece and abroad. Since 2011 he has been a member of the GNO Chorus. In 2016/17 he participated at Z. Terzakis' opera workshop, where he presented the role of Guglielmo (Così fan tutte, Mozart). As a member of the programme "Youth Opera", he interpreted the role of Michele (Il tabarro, Puccini, 2017/18). He has participated in many concerts and has attended masterclasses by: D. Kavrakos, D. Platanias, D. Tiliakos, T. Christoyannis, M. Krilovici. His interest involve the electric guitar, composition, music production and photography.