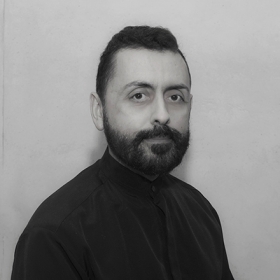 Greek tenor, he studied singing with George Zervanos and Onoufrios Sohos. He has been a member of the Greek National Opera Chorus since 1993. He has sung leading roles in such productions as Kiss me, Kate, The Fugitives of the Chessboard by George Kouroupos, The Masque of the Red by Dimitris Marangopoulos, Die Fledermaus, Rhea, Die Zauberflöte, Der Rosenkavalier, Il tabarro, Ariadne auf Naxos, L’assedio di Corinto, La bohème, La traviata, Rigoletto, Carmen, Manon Lescaut, as well as in operas for children like The Tale of Czar Saltan, Die Fledermaus and The Magic Violin. He also performed in the productions The Apology of Socrates by Theodore Abazis and I vespri siciliani staged at the Megaron – The Athens Concert Hall, as well as in the productions Lo frate n̓ namorato (with the ensemble Lyriki Ekfrasi), Haydn’s Der Apotheker (with the ensemble Polymnia), Peri’s Euridice (European Cultural Centre of Delphi, Greek premiere), Antigone and Opus Elgin: The destruction of the Parthenon by Theodore Stathis.