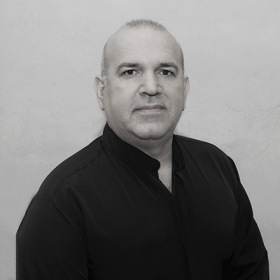 Greek tenor, he was born in Thessaloniki, where he took his first music lessons (piano, theory, classical song). He holds diplomas in monody, harmony, counterpoint, fugue and composition. Since 1998 he has been living in Athens, where he works as a permanent member of the GΝΟ Chorus. He writes music for performances (children, opera, dance) and movies. He has performed in Greece and abroad lead roles, including Tamino (Die Zauberflöte), Pinkerton (Madama Butterfly), Turiddu (Cavalleria rusticana). In addition, he has collaborated with such conductors as Bruno Rigazzi, Armando Gatto, Angelo Cavallaro, Lukas Karytinos, Theodore Antoniou, Alkis Baltas, Elias Voudouris and composers like Mikis Theodorakis, Dimitris Papadimitriou, Yannis Sabrovalakis, Giorgos Kambanas, Sotiris Rembapis and others as an assistant composer and producer in cinema, theatre and discography projects. His collaborations include: Timelapse pictures 2009 – Hellenic Broadcasting Corporation (music of the film The boy and the tree by Eugene Trivizas), Orchestra of Beuth University – Berlin (musical works upon request), En Plo Publishing, The dream and the miracle (2017/18).