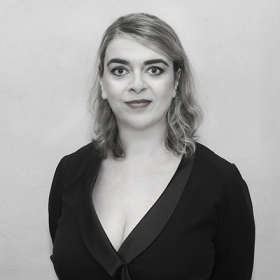 Greek mezzo-soprano, she was born in Germany, where she started piano at the age of seven. She studied voice with Αntigoni Sgourda at the Athenaeum Conservatory, Athens (diploma with honours and first prize) and attended masterclasses with Μarina Krilovici, Αris Christofellis, Antonia Lavanne, Nelly Miricioiu-Kirk, Ingeborg Danz και Μechthild Stamatakis. She made her debut in Switzerland (Ernen, 1999) as Cornelia in Handel’s Giulio Cesare in Egitto. In 2003 she attended a masterclass with Helmuth Rilling at the Ιnternational Bach Academy, Stuttgart, and performed as a soloist in Bach’s Matthäus Passion at the Athens Concert Hall. Since 2000 she has been a permanent member of the Chorus of the Greek National Opera, where she has also sung soloist roles in such operas as Die Entführung aus dem Serail, Marathon-Salamis, Orfeo ed Euridice, Le Comte Ory, Madama Butterfly, Carmen, Der fliegende Holländer, Elektra and Suor Angelica. Moreover, she has given concerts in Greece and abroad.