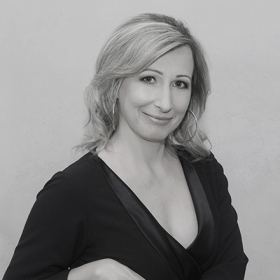 Russian mezzo-soprano, she began her music studies at the music college at Taganrog, Russia (diploma in chorus conducting) and continued at the Gnesin Russian Academy of Music, Moscow (diploma in singing). She has been a member of the Chorus of the Athens Festival, the Chorus of Hellenic Broadcasting Corporation, and “Women’s voices” ensemble. In 2003 she performed as a soloist in Richard Strauss’ Die Frau ohne Schatten at the Megaron – The Athens Concert Hall. In 2009 she received the third prize at the voice competition of the Society of Artists for Opera and Operetta. Since 2008 she is a permanent member of the Chorus of the Greek National Opera, where she has also sung soloist roles such as Mary (Der fliegende Holländer) and Countess Ceprano (Rigoletto).