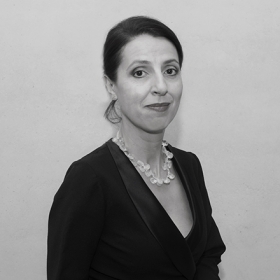 Greek soprano, she graduated from the Mary Boyatzis-Traga Drama School of and studied voice with Frangiscos Voutsinos and Kostas Paskalis (diploma with honours, Kodály Conservatory). She continued her studies in Paris as a scholar of  École Normale de Musique de Paris and the French Hellenic Cultural Centre (Premier Prix de la ville de Paris, Diplôme de Chant, Diplôme d'art lyrique). She attended master classes with Laura Sarti, Irma Kolassi, Christa Ludwig, François Le Roux and Jean-Philippe Lafont. She has sung Dido (Dido and Aeneas) in Nanterre and at the Théâtre d’Étampes (France). As a permament collaborator she participated in all the productions of Théâtre du Châtelet, Paris, from 2003 to 2006. Since 2007 she has been a permanent member of the Greek National Opera Chorus, singing in almost all productions.