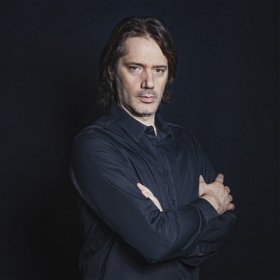 Greek bass, he studied voice in Athens under Frangiskos Voutsinos and in Milan under Maria-Luisa Cioni and Roberto Negri (Alexander S. Onassis Foundation scholarship). He graduated from the Department of Political Sciences of the Athens Law School (University of Athens) and from the Veaki Drama School. He attended courses in acting and stage direction with Luca Ronconi at the Piccolo Teatro, Milan. Among others, he has sung at the Greek National Opera, the Opera of Thessaloniki, the Athens Concert Hall, the Thessaloniki Concert Hall, the Οdeon of Herodes Atticus, the Ancient Theatre of Epidaurus, at the United Nations and the Lincoln Center of New York, as well as in Alexandria, Milan, Basel, Qatar, Germany, Cyprus, Boston, etc with the Orchestra of Colours (Athens), the Thessaloniki State Orchestra, the Athens State Orchestra, the Athens Chamber Orchestra, the Cyprus State Orchestra, the Athens Municipality Symphony Orchestra, etc. He has performed in concert as well as in world premieres and recordings of Greek composers’ works. His theatre credits include leading roles in ancient Greek and contemporary plays (National Theatre, Greek Art Theatre Karolos Koun, Ancient Theatre of Epidaurus, Odeon of Herodes Atticus, etc), while his cinema credits include films by Theo Angelopoulos, Lefteris Xanthopoulos, etc.