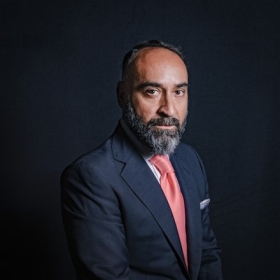 Greek tenor, born in Athens. He studied Byzantine music and classical voice and continued his musical studies in Cremona, Italy (Alexandra Trianti scholarship, 1998). As a soloist he has performed roles from the classical and contemporary repertoire at the Greek National Opera, as well as at the Athens and Thessaloniki Concert Halls. He has collaborated with all major Greek orchestras and has appeared in many performances and concerts, in international and Greek festivals and theatres such as Greek Festival, Demetria, Santorini and Nicosia Festivals, Maggio Musicale in Florence, Carnegie Hall (New York), National Auditorium of Music (Madrid), Cairo Opera, etc. He participated in the recordings of Thanos Mikroutsikos’ At My Place I Am A Perfect Stranger (poetry by François Villon) and The Return of Helen, Giorgos Hatzinasios’ Chronicle of the Fall, Tasos Ioannidis’ Revelation of John, Dimitris Papademetriou’s Satyricon, Bizet’s Le Docteur Miracle, etc. From January 2008 to October 2012 he was president of the Association of Greek Lyric Soloists and since 2011 he has been a permanent member of the Greek National Opera Soloists.