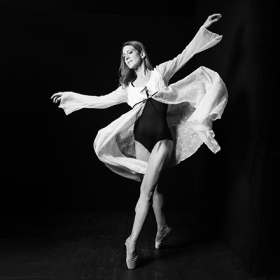 She was born in Athens. She studied dance at the Carol Hanis School, where she was trained on the RAD system (Royal Academy of Dance, London), which she completed obtaining all the degrees. She succeeded the examinations of the Ministry of Culture in Athens and continued her studies at the Anna Petrova Professional Dance School. She participated in performances with the Youth Ballet of the Royal Dance Academy (London), where she danced solo roles in such ballets as Esmeralda and Les Sylphides. Since 1999 she has been a member of the GNO Corps de Ballet. She participated in productions of classical and neoclassical repertoire, such as La Bayadère, The Sleeping Beauty, The Nutcracker, Swan Lake, Giselle, Links, Romeo and Juliet, The Snow Queen, Don Quixote, Cinderella, Zorba the Greek. She has collaborated with the most prestigious internationally choreographers such as Igor Zelensky, Pierre Lacotte, Andonis Foniadakis, Renato Zanella, Rudi van Dantzig, Germinal Casado, Irek Mukhamedov, Lorca Massine and Konstantinos Rigos.