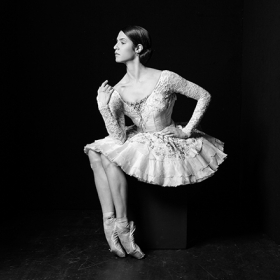 Born in Athens, at the age of nine she started the competition division of rhythmic gymnastics. She started ballet at the State School of Dance, Athens (2003/06), and continued her studies at the Professional Dance School of the Greek National Opera graduating with a diploma of dancer (2010) and teacher (2012). During 2011/12 she danced with Daniel Lommel’s Aenaon Dance Theatre in Greece and France. Since 2012 she has been a member of the Greek National Opera Ballet and has worked with prestigious choreographers such as Irek Mukhamedov, Renato Zanella, Yannick Boquin, Lorca Massine, Pontus Lindberg, Benjamin Millepied, Alexander Ekman, Andonis Foniadakis and Konstantinos Rigos. She has taught at the Pre-Professional Department of the GNO Dance School (2012/17). She has attended the seminar Art of Dance (Berlin, 2014, repertoire by William Forsythe and David Dawson). She is a graduate of the Department of Early Childhood Education of National and Kapodistrian University of Athens.