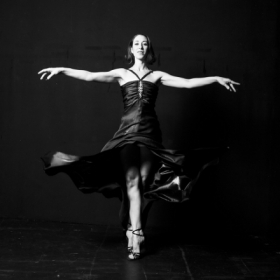 Born in Athens, she studied at the State School of Dance, Athens, and at the Professional Dance School of the Greek National Opera (dancing and teaching diploma with honours). She also holds diplomas of the examination system of the Royal Academy of Dance, London. Since 2004 she has been a member of the Corps de ballet of the Greek National Opera dancing as well as lead roles in such ballets as Paquita, Giselle, Don Quixote. She has cooperated with such choreographers as Alice Elliot, Igor Zelensky, Ray Barra, Mark Morris, Olga Evreinoff, Galina Samsova, Pierre Tavernier, Irek Mukhamedov, Vladimir Vasiliev, Daniel Lommel, Renato Zanella, Yannick Boquin, Andonis Foniadakis, etc. She has participated in numerous Greek and international competitions and has received numerous awards.