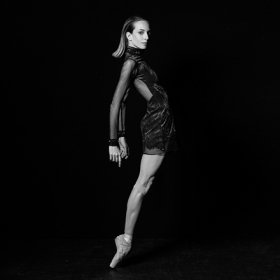 She was born in Piraeus and started ballet when she was three years old. At the age of six she was chosen to participate at the competition division of rhythmic gymnastics of Drapetsona, where for many years she was a Greek champion. Moreover, she was chosen to create the national team of rhythmic gymnastics (solo / ensemble). She studied at the Professional Dance School of the Greek National Opera, graduating with a diploma of teacher with honours. Stamou has won the first prize at the Pan-Hellenic School Dance Competition (classical ballet / modern dance, 2008). Since 2013 she has been a member of the Greek National Opera Ballet. She has cooperated with distinguished choreographers such as Alexander Ekman, Douglas Lee, Pontus Lindberg, Renato Zanella, Yannick Boquin, Andonis Foniadakis, Irek Mukhamedov, Lorca Massine and Angeliki Stellatou in classical and modern choreographies and has studied next to Yannick Boquin, Didier Chape, Susanna Campo, Bruce Steivel, Myrna Kamara, Ugo Ranieri, Yannis Dontsakis, Aleksandar Neskov, Christiana Stefanou, etc. In 2016, after auditioning, she was accepted to join the Compagnie Illicite dance group in Biarritz, France.