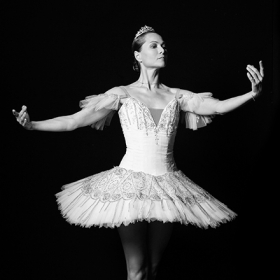 She was born in Moldavia. During 1987/95 she studied at the Federal Lycée of Choreography. From 1993 to 1997 she participated in all performances of the National Theatre of Moldavia, where in 1995 she became a permanent member. During 1998-2001 she continued with her studies at the National School of Dance in Athens. Since 2004 she has been a member of the Greek National Opera Ballet participating in numerous ballet productions.