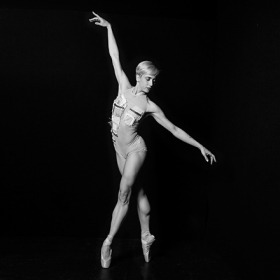 Born and raised in Thessaloniki, she has been a champion of Greece in rhythmic gymnastics (1992/99) and member of the Greek national team. She graduated from the Kafantari Professional Dance School. From 2006 to 2009, she participated as a Demi-Soloist at the St Petersburg State Academic Yacobson Ballet Theatre (Russia), dancing classical, new-classical and modern repertoire such as Swan Lake, Giselle, Chopiniana, The Nutcracker, Romeo and Juliet, Boléro, Carmen, etc. Moreover, she was a dancer at the Liberec State Theatre (Czech Republic, 2008) performing in numerous ballets. Since 2009 she has been a member of the Greek National Opera Ballet, where she has also danced soloist roles in such ballets as Don Quixote, The Nutcracker, Cinderella, etc.