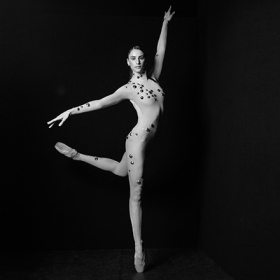 A graduate of the Professional Dance School of the Greek National Opera (diploma of dancer and teacher), she also holds diplomas in the examination system of the Royal Academy of Dance London. She studied for one year at the State School of Dance, Athens, and graduated from the Department of Greek Philology. In 2011 she was accepted at the New English Ballet Theatre (London). Since 2012 she has been a member of the Greek National Opera Ballet. She has danced roles in such works as The Nutcracker (Renato Zanella), Carmencitas (Maria Kousouni), Sleeping Beauty (Pontus Lindberg), Giselle (Irek Mukhamedov), Carmen (Roland Petit), Air (Andonis Foniadakis), Giselle (Mats Ek), Arenal (Nacho Duato), Bitter Earth (Vangelis Bikos, Agapios Agapiadis), The Love bacillus (Sofia Spyratou), the Opera and fashion project (Konstantinos Rigos), etc. In 2015 she choreographed for the Open Rehearsal of Young Choreographers of the Greek National Opera. She worked in musicals and attended seminars of drama, voice, classical and modern dance at the Academies of London and Berlin.