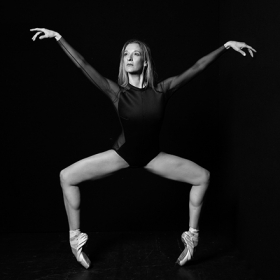 Βorn in Athens, she studied at the Anna Petrova Professional Dance School and acquired all of the diplomas of London’s Royal Academy of Dance examination system. In 1990 she was hired as a member of the Greek National Opera Ballet, advancing   to Principal Dancer in 1995 and Soloist in 2000. In 2001/02 season she worked with the Karlsruhe National Dance Theatre (Germany). From 2005 to 2017  she has been   a dance instructor of the Greek State School of Dance, Athens. She has danced in numerous productions of the Ballet of the Greek National Opera performing major and minor roles. She has worked with prominent Greek and foreign choreographers such as Yannis Metsis, Leonidas De Pian, Igor Zelensky, Carol Armitage, Germinal Casado, Pierre Tavernier, Haris Mandafounis, Andonis Foniadakis, Irek Mukhamedov and more.