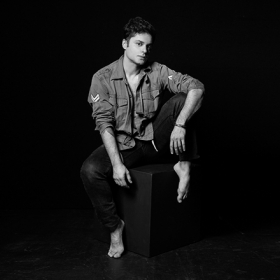 Born in Greece, he began dancing at the age of seven. Αt the age of nineteen he got a dancing and a teaching diploma. He also holds diplomas of the examination system of the Royal Academy of Dance, London, and the Spanish National Dance Company. He attended Kira Kegel’s modern dance workshops. While still a student, he worked with the Niki Kontaxaki Dance Group, performing principal roles in the ballets Serenade,  Le Corsaire, Giselle, Coppélia, Don Quixote, etc. He joined the Greek National Opera Ballet in 1999, then he became a Demi-Soloist (2003) and currently he is a Soloist. He has danced first roles in such ballets as The Nutcracker, La Bayadère, Sleeping Beauty, Raymonda, Birds [Ornithes], Romeo and Juliet, Zorba the Greek, Four Last Songs, Baroque ’n’ Roll, The Moor’s Pavane, etc and in operas like The Manuscripts of Manuel Salinas, Rhea and Marathon-Salamis. He presented his own choreographies at the Greek National Opera Dance Box educational activity (2013) and at the Open Rehearsal of Young Choreographers of the Greek National Opera (2014).