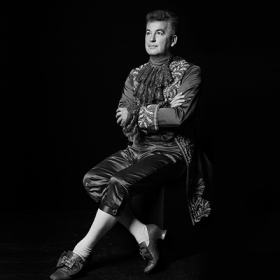 He was born in Romania and studied at the Cluj-Napoca Classical Ballet School. He began his career as a Principal Dancer in Constanța (Romania) and continued in Bucharest, New York and Paris, where he danced roles of classical repertoire, George Balanchine, Antony Tudor, etc. He has cooperated with such choreographers as Rudi van Dantzig, Germinal Casado, Renato Zanella, Pierre Lacotte. He has performed lead roles in such ballets as Swan Lake, The Sleeping Beauty, Giselle, The Nutcracker, Don Quixote, Romeo and Juliet, etc. Since 1993 he has been a member of the Ballet of the Greek National Opera. At the same time, he has worked with ballet schools like the Greek State School of Dance, Athens, American College “La Dance”, Royal Ballet School, London, as well as with the dancetheatre Roes as a dancer, ballet dancer and assistant choreographer. He has taught ballet in New Jersey Ballet School and   in Broadway Dance Center, New York.