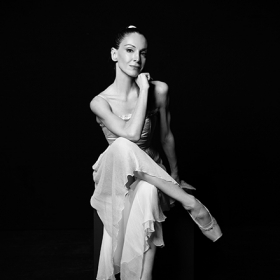 Born in Athens, she studied with scholarship and graduated with distinction from the Niki Kontaxaki Professional Dance School. She received the diplomas of dancer and teacher from the Royal Academy of Dance, London. She has participated in various dance companies in Greece and China. She has been a member of the Ballet Studio of the Greek National Opera. Since 1996 she has been dancing with the Greek National Opera Ballet, where in 2003 she became a Demi-Soloist, in 2004 a Soloist and in 2008 a Principal Dancer. She has worked with numerous distinguished Greek and foreign choreographers. Her repertoire includes leading roles in classical and modern ballets such as Don Quixote, Swan Lake, The Sleeping Beauty, The Snow Queen, Giselle, Eugene Onegin, The Nutcracker, Romeo and Juliet, Le Corsaire, La Fille mal gardée and Alles Walzer.