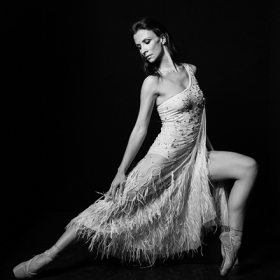 Born in Athens, she began dancing at the age of six at the Yannis Metsis Ballet School and continued with Vicky Marangopoulou. At the age of 12 she studied with a scholarship at the Hamburg Ballett John Neumeier. Moreover, she studied at the British National Opera Studio in London on a Peter Schaufuss scholarship, and later received a diploma as a teacher from the Greek State School of Dance. She joined the Ballet of the Greek National Opera in 1992 and in 2001 she became a Principal Dancer. At the Greek National Opera, she has interpreted such roles as Kitri (Don Quixote), Lilac Fairy and Aurora (The Sleeping Beauty), Juliet (Romeo and Juliet), Myrtha (Giselle), Rose (The Snow Queen), Black swan (Swan Lake, Athens Concert Hall). Moreover, she has danced in operas such roles as Goddess Isis (Aida), Zapata’s wife (Canto General), Rhea (Spyros Samaras’ Rhea), Wu Ching-Hua (Nixon in China, Athens Concert Hall) and Bleeding dancer (Faust).