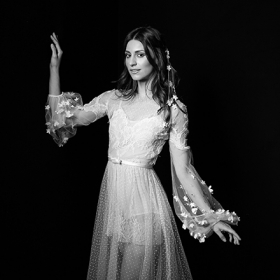 Born in Larissa, Greece, she studied with a scholarship at the Heinz Bosl Ballet Academy, Munich, while being invited to study at the American Dance Academy, at the Wiener Staatsoper Ballet Academy and at the École Supérieure de Danse de Cannes Rosella Hightower. She started her international career in 2018 and performed as a Principal Dancer at the Arena di Verona dancing in Franco Zeffirelli’s Aida (choreography by Vladimir Vasiliev and Suzanna Egri, 2018 & 2019) and La traviata (choreography by Giuseppe Picone, 2019) receiving extraordinary reviews. She was a scholar of the Alexander S. Onassis Foundation and completed her diploma with honours. She represented Greece at the 11th Eurovision Young Dancers (Warsaw, 2005) and was ranked among the ten best young dancers of Europe. She has received international first prizes in Grand Prix and numerous honorary distinctions. In 2012 she became a member of the Greek National Opera Ballet, later a Demi-Soloist (2014), a Soloist (2015) and a Principal Dancer (2017).