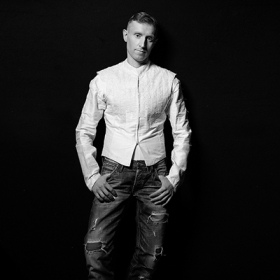 He studied at the National Ballet School of Belarus. In 1995/2002 he collaborated with the National Academic Bolshoi Opera and Ballet Theatre of the Republic of Belarus, initially in the Corps de ballet and later as a Soloist (1997/2000) and a Principal Dancer (2000/02), having danced such roles as Siegfried (Swan Lake), Prince Désiré (The Sleeping Beauty), Mercutio (Romeo and Juliet) and Koschei (The Firebird). He has collaborated with the State Academic Ballet Theatre of Boris Eifman in Saint Petersburg, Russia. He has been Principal Dancer of the Greek National Opera since 2004, where he has danced the roles of Prince (The Nutcracker), Escort (The Snow Queen), Zapata (Canto General), Siegfried and Jester (Swan Lake), Grand pas (Paquita), Count Albrecht (Giselle), Espada (Don Quixote), Paris (Romeo and Juliet), Faun (Faust), Signor Querra (Cinderella), Escamillo (Carmen), Onegin (Eugene Onegin). Moreover, he has participated in such ballets as Four Last Songs, Boléro, Empty place and has cooperated with Valentin Elizariev, Boris Eifman, Rey Barra, Rudi van Dantzig and Irek Mukhamedov.