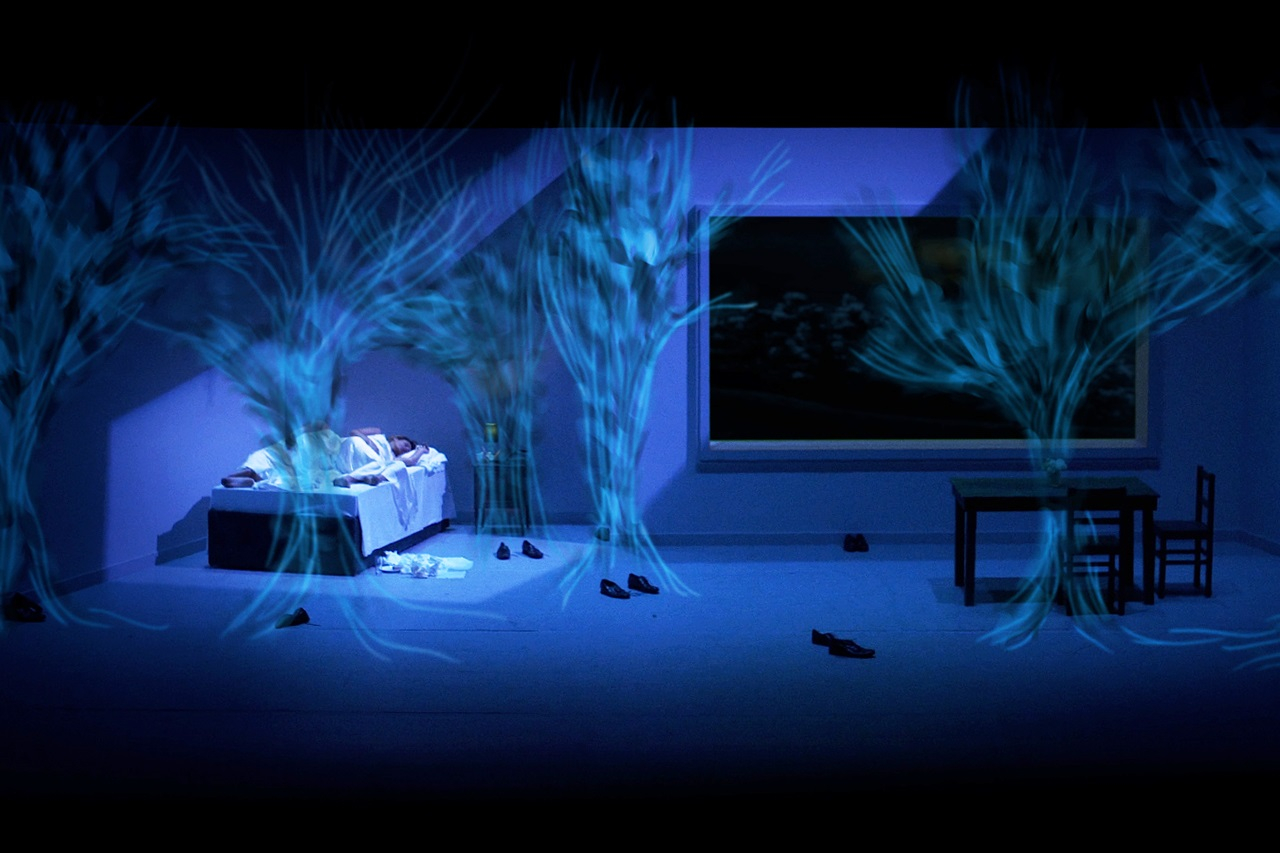 The five short films that will be screened as part of GNO’s 3rd Online Festival combine the art of the image with the power of music and narrative language through new readings of music works. The dream and fantasy of Arnold Schönberg’s Verklärte Nacht meet the confessions of people in deserted buildings from Nikos Ioakeim’s mesmerizing composition, and the memories of the Woman in Black in Yorgo Sicilianos’ monodrama The Lady in the Moonlight. TarquinioMerula’s lullaby sung by different mothers in modern-day Athens intertwines with Musical GNOod Mornings, where operatic singing takes a morning TV show by storm. Through all these works, the Festival reveals imaginative ways of transmuting music and language into another form of art through the image, proposing new operatic, inspired film experiences filled with humor and an honest mood of self-sarcasm. The Festival is curated by GNO’s Artistic Director Giorgos Koumendakis.

The Lady in the Moonlight by Yorgo Sicilianos

THE MUSIC OF LANGUAGE

For string sextet in one movement,

inspired by Richard Dehmel’s poem of the same title

Premiere: 9 December 2020 at 21.30, on nationalopera.gr/en, GNO Facebook page and YouTube channel, and digitalculture.gov.gr | It will remain available online until 9/1

Schönberg’s Verklärte Nacht (Transfigured Night, op.4, 1899) is perhaps his most popular, if not his most representative work. Written in what is widely known as Schönberg’s “post-Romantic” period and before the invention of the twelve-tone system, Verklärte Nacht is one of the most important pieces of the 20th century programme music.It is based on Richard Dehmel’s poem without however using the text as part of the composition. Although Schönberg wrote the sextet following the six stanzas of the poem, he allowed for no pauses between them, giving the listener the impression of a continuous composition.

Dehmel’s poem, with familiar proto-expressionistic characteristics, describes a man and a woman crossing a forest in the midst of an unnaturally bright night. The woman reveals to her partner that she is pregnant by another man. Despite her guilts and shame, the man calms her down and accepts the unborn child, leading the poem to an ecstatic climax.

Schönberg’s composition, apart from being an ingenious combination of the compositional tradition of Brahms’motivistic transformations and Wagner’s constant compositional line (Schönberg’s references to Wagner’s opera Tristan und Isolde are numerous), it is also in part an autobiographical account of his relationship with his music teacher’s –the famous composer Alexander von Zemlinsky– sister, whom he finally married.

The director Themelis Glynatsis, in an attempt that oscillates between a performance and animation, converts the expressionist narrative of Dehmel’s poem and Schönberg’s composition into material for a dramaturgy of a nightmare, which gradually gives its place to an extraordinary psychic transfiguration and to a final concomitance, whereby the intimate bodies stop being monstrous and are overwhelmed by tenderness. In other words, a family drama, and a love story, both demanding a brave affirmation of its characters in order to disengage themselves from repetition and guilt. A basic dramaturgical motif is nature, which initially appears vengeful and uncanny, but little by little is transformed into a landscape of atonement.

Premiere: 16 December 2020 at 21.30, on nationalopera.gr/en, GNO Facebook page and YouTube channel, and digitalculture.gov.gr | It will remain available online until 16/1

Mich nicht (Not me) is a short film conceived and directed by Zoe Xanthopoulou, and based on composer Nikos Ioakeim’s work michnicht. in den fremdenstädten (2014). Black and white long takes, portraits of people against the backdrop of deserted places, and parallel stories through poems of Edgar Allan Poe and a narrative of Guy de Maupassant compose a special film about war and loss, featuring the work’s performers.

The work mich nicht. in den fremdenstädten (not me. in foreign lands) was written in 2014 for a narrator, a masked singer with monastery bells, clarinet and string quartet, and it was based on poems of Edgar Allan Poe (The City in the Sea, The Sleeper) and a short story of Guy de Maupassant (Deux Amis). It was commissioned and presented in Gent, Belgium, on the occasion of the 100th anniversary of the outbreak of World War I. “The baritone, in the role of the summoner of the dead, sings lyrics of Poe, while the narrator, in a parallel universe, reads excerpts from Maupassant’s short story in another language. The musicians also participate through speech contributing thus to the creation of a musico-theatrical mosaic, an elliptic script on death and loss. The title is a reference to Bertolt Brecht and Kurt Weil’s Threepenny opera, a landmark work of an era quite similar to ours – can we hear the distress signal? The work was recently recorded especially for the filming of Zoe Xanthopoulou’s movieMichnicht”, notes Nikos Ioakeim.

“The work’s original title michnicht. in den fremdenstädten,a reference to Brecht’s Threepenny opera, became an occasion for unlocking a world of images inside me; images with people marching toward a meeting point where the artist-enchanter leads them to an existential glorification that will become a collective memory. A new world is born through associations and references to Macheath from the 1931 film Threepenny opera (directed by Georg Wilhelm Pabst) and Polly as a bride, to Poe’s personal register and subjectivity, to annihilated tender feelings like those in Guy de Maupassant’s writings, to Méliès’ “fake skies”, to a Felliniesque landscape between the real and the imaginary, and to expressionistic figures offering a way out from the atrocities of socio-political events through the art. All the above draw inspiration from the elements of the music work”, notes director Zoe Xanthopoulou.

Premiere: 23 December 2020 at 21.30, on nationalopera.gr/en, GNO Facebook page and YouTube channel, and digitalculture.gov.gr | It will remain available online until 23/1

Canzonetta spirituale sopra alla nanna by Italian composer, organist and violinist of the early baroque era Tarquinio Merula (1595-1665) is a moving song about the fear of death, hope and love. Tarquinio Merula, an exuberant figure, promiscuous, and with a rebellious spirit, produced cutting-edge compositions, that surprise even modern-day audiences with their boldness and originality.

In Tarquinio Merula’s Canzonetta sopra alla nanna, time is linear; it fades away and begins again, like a fairy tale that has no end. The concern about the inevitable future, the healing power of music, expectation and hope. This 16th-century lullaby, with its unadorned, minimalistic form, converses with modern music.

A female voice and two wind instruments explore baroque shadings and modern dynamics, plunging into the palimpsest of female emotions. Multiphonics and improvisations bridge Tarquinio Merula’s audacious –and extremely bold for his time– take on composition with the aesthetic of modern music, in an absolutely original approach to orchestration.

The video follows Greek and foreign female figures, walking around rooms of historic buildings in the city, ballrooms and interwar lounges. It focuses on their silent, personal narrative. Labyrinthine paths of an urban tale, heart-breaking experiences hidden behind glances, tapestries, and fabrics. The hybrid aspect of Athens becomes the fascinating canvas for real-life stories of pain, toil and hope.

Premiere: 30 December 2020 at 21.30, on nationalopera.gr/en, GNO Facebook page and YouTube channel, and digitalculture.gov.gr | It will remain available online until 30/1

A light-entertainment TV show comes to shake the morning zone and keep you company with original segments that will both inform and entertain you. Cooking, games with many prizes, astrology, but also unexpected interviews with famous and beloved figures, promise to accompany you and take you on a short journey away from the problems and concerns of everyday life.

Music, of course, could not be absent from such a journey; a faithful road companion through the memories of a sweet (but also playful!) past and the hopes for a better future. But, for the time being, stay tuned and share the joy, the fun, and the liveliness of the creative team and our guests that only GNOod morning offers!

Based on an idea of mezzo-soprano Margarita Syngeniotou and texts by stand-up comedian and librettist Dimitris Dimopoulos, GNOod morning draws inspiration from the exaggeration in the presentation of TV morning shows and the exuberance of the operatic stage, and create a hybrid of language and music that reintroduces already existing music theatre works in a new comic context.

The Lady in the Moonlight by Yorgo Sicilianos

Μonodrama for mezzo-soprano, narrator, clarinet, viola and guitar, based on Yannis Ritsos’ poem The moonlight sonata.

Premiere: 6 January 2021 at 21.30, on nationalopera.gr/en, GNO Facebook page and YouTube channel, and digitalculture.gov.gr | It will remain available online until 6/2

A dramatic monologue for mezzo-soprano, narrator, clarinet, viola and guitar, The Lady in the Moonlight (1977) is, from both the technical and the expressive point of view, one of the greatest achievements in the invaluable oeuvre of YorgoSicilianos(1920-2005), undoubtedly one of the most serious representatives of the Greek post-war musical avant-garde.

Based on the poem The Moonlight Sonata from Yannis Ritsos’ collection The Fourth Dimension, The Lady in the Moonlight consists of the “useless confession” of an aged woman, dressed in black, addressed to a silent, callous young man in an old room flooded with moonlight – as well as a shattering treatment of the passage of time, of decay, desire and narcissistic fantasy. At the apex of his aesthetic and intellectual maturity, Sicilianos poetically transmutes Ritsos’ text into a rigorously worked out fusion of melodic lyricism and speech-like enunciation, combining the arsenal of serial music with a deep, brooding romanticism – and also, in the background, the discreet (though theatrically irresistible) recollection of Beethoven’s Moonlight Sonata.

Using the original title of Beethoven’s Moonlight Sonata (“Sonata quasi una fantasia”) as a starting point, Costas Athousakis’ direction and Calliope Bredologou’s script follow the structure of Sicilianos’ work and the heartrending, often delirious monologue of Ritsos’ heroine, using the tools of cinema to capture the memories, unrequited desires and fantasies of the Woman in Black.

The film’s wager is a mix of naturalistic observation and absurdism, using as setting the exterior of a dilapidated villa by the sea in full daylight. There, the heroine engages in “introspection exercises” with the cooperation of six dancers, inviting the viewer to sort out the images flooding her discourse “in the manner of a fantasy”.

An intimate confession, an account of a life lived away from life, with an echoing phrase as its refrain: “Let me come with you…”.