Suitable for ages 12 and over.

Giuseppe Verdi
As part of the Athens Epidaurus Festival

The Greek National Opera’s first major summer production for 2022, Giuseppe Verdi’s darkly menacing masterpiece Rigoletto, conducted by Lukas Karytinos and directed by Katerina Evangelatos, is to be presented at the Odeon of Herodes Atticus on 2, 5, 8 and 11 June as part of the Athens Epidaurus Festival. Tickets are available from the GNO Box Office at the SNFCC and Athens Festival Box Offices, and online via aefestival.gr and viva.gr. This production is made possible by a grant from the Stavros Niarchos Foundation (SNF) [www.SNF.org] to enhance the GNO’s artistic outreach.

First performed 171 years ago in Venice, Rigoletto has proven itself one of the most popular operas in the repertoire. With his Rigoletto, Verdi opened a new chapter in his career as a composer, presenting a work with its own distinct identity that was also more open to experimentation, with its sudden shifts between formal melody and dramatic recitative ensuring that the action unfolds at lightning speed.

The story tells of Gilda, daughter of the hunchbacked court jester Rigoletto, and her love for the dissolute Duke of Mantua, who introduces himself to her in the guise of a poor student. To take his revenge on the Duke for seducing his daughter, Rigoletto plots his murder. On discovering her father’s plans, Gilda decides to save her beloved by taking his place and sacrificing her own life.

The Greek National Opera commissioned theatre director and Artistic Director of the Athens Epidaurus Festival Katerina Evangelatos to direct this production of Rigoletto. Following on from her first successful collaboration with the GNO –the contemporary opera Z– Evangelatos is now pitting herself against this major work of the operatic repertoire within the particularly challenging scenic setting that is the Odeon of Herodes Atticus. In an evolution of her signature directorial approach, Katerina Evangelatos is seeking to shed light on the dark and conflicted character that is Rigoletto, setting the action within the corrupt society of an Italian backwater in the 1980s. The director had this to say about her directorial approach: “The cycle of violence depicted by Verdi in his Rigoletto is here transferred to a self-contained little world in the Italian provinces during the 1980s, where organised crime reigns supreme. Corruption, criminality, rape – this is the true face of what is a pietistic, conservative, and superstitious society. Eva Manidaki’s set –a timeworn Italian country mansion that stows the brutality and darkness of the work’s characters– is perfectly embedded within its physical Odeon setting, while Alan Hranitelj’s costumes complete the picture of a society in steep decline.”

Conducting is the acclaimed maestro and artistic director of the Athens State Orchestra, Lukas Karytinos.

In the title role is the internationally acclaimed Greek baritone Dimitris Tiliakos, who has performed as Rigoletto in Brussels, Moscow, Dresden, and Stuttgart to great success.

Playing the Duke of Mantua on 2, 5 and 8 June is the acclaimed Italian tenor Francesco Demuro, who has performed the role at the Metropolitan Opera in New York, Opéra national de Paris, Teatro Real in Madrid, Arena di Verona, and the San Francisco Opera, as well as in Zurich, Tokyo, Berlin, Hamburg, and Frankfurt, and in 2022 performed the role at both the Royal Opera House in London and the Vienna State Opera. On 11 June, the role is to be performed by Dimitris Paksoglou.

Playing Gilda is the internationally active soprano Christina Poulitsi, who has performed the role in Florence under the baton of the acclaimed conductor Zubin Mehta.

Sparafucile is performed by Petros Magoulas, and Maddalena by Mary-Ellen Nesi. 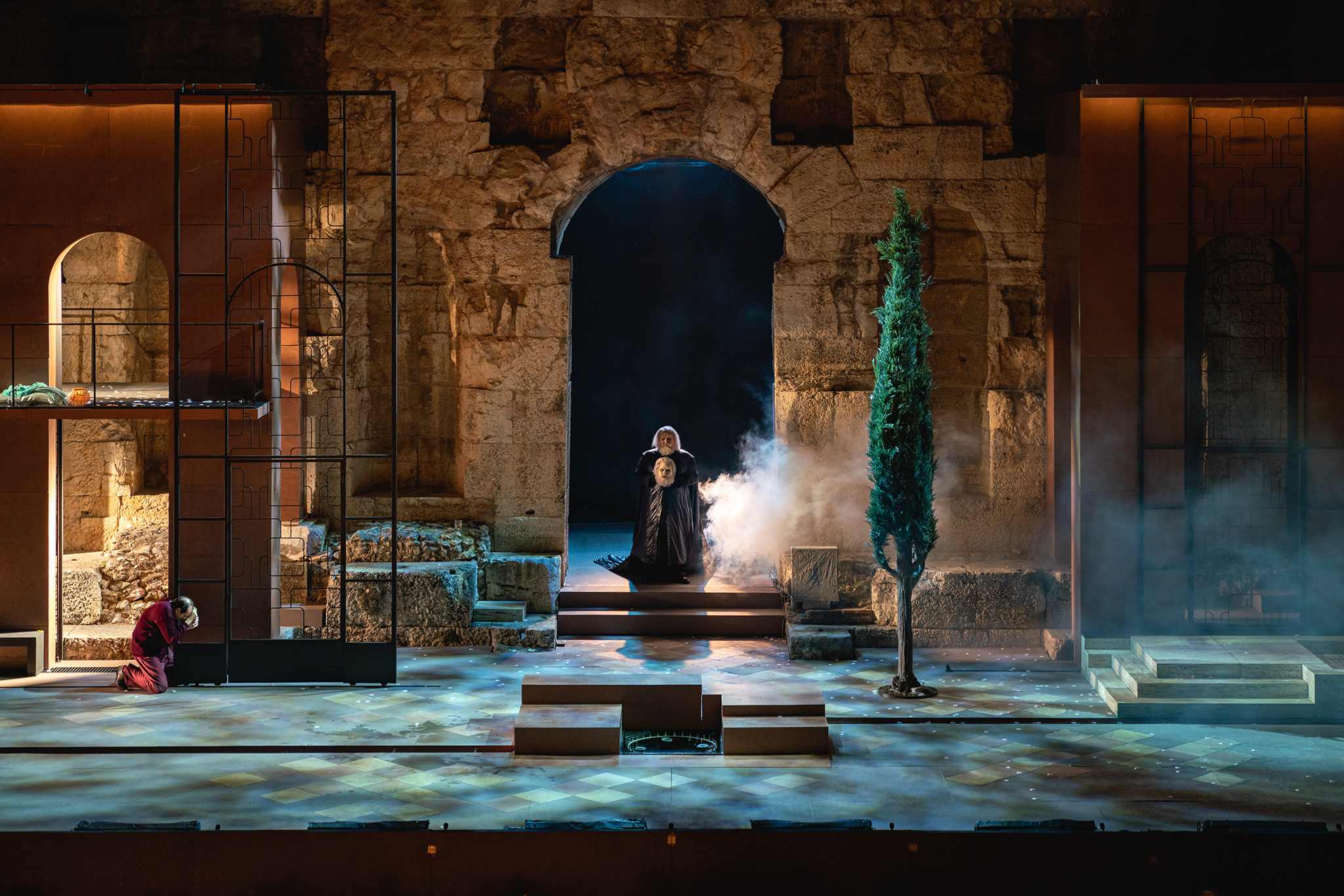 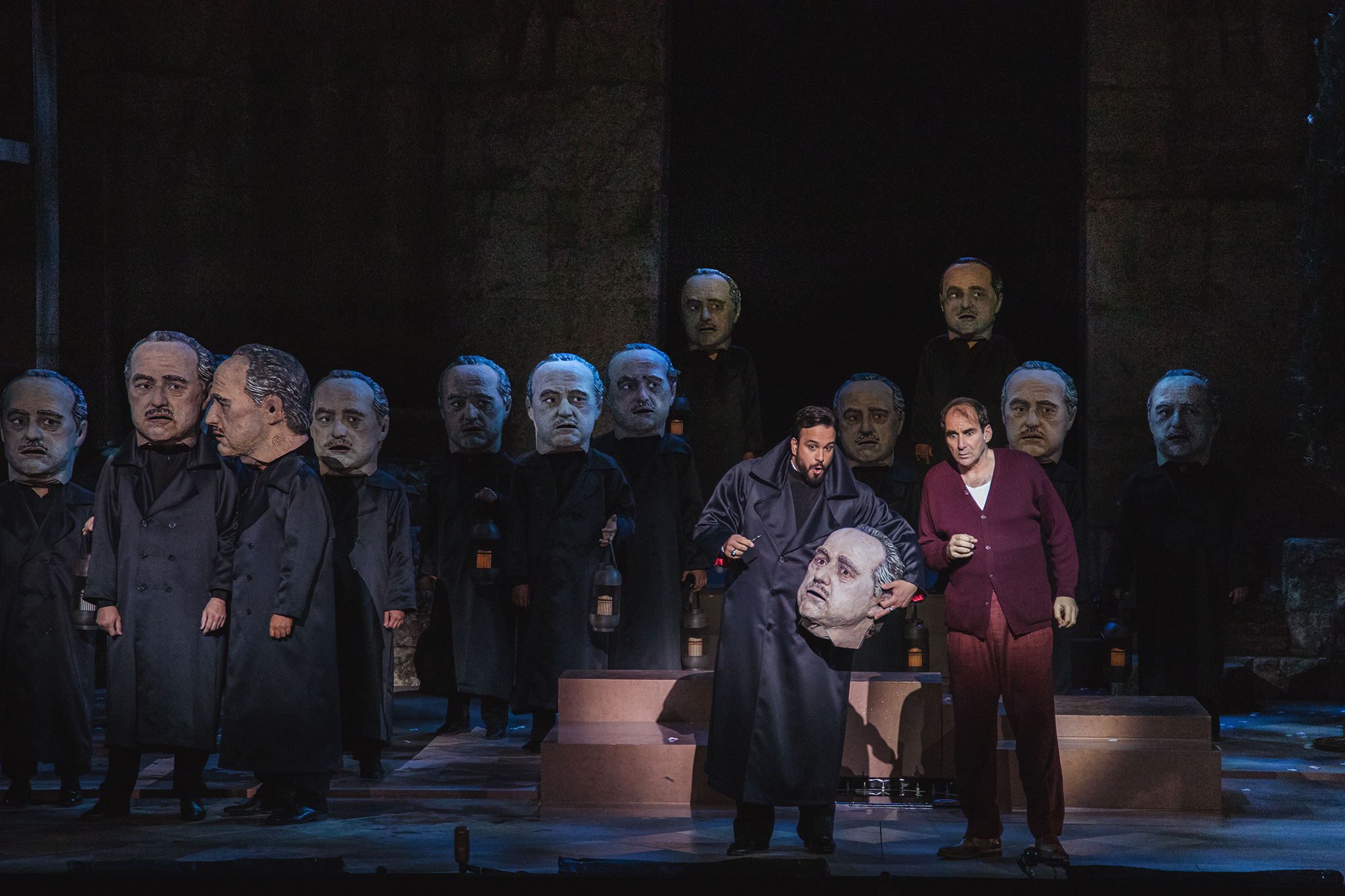 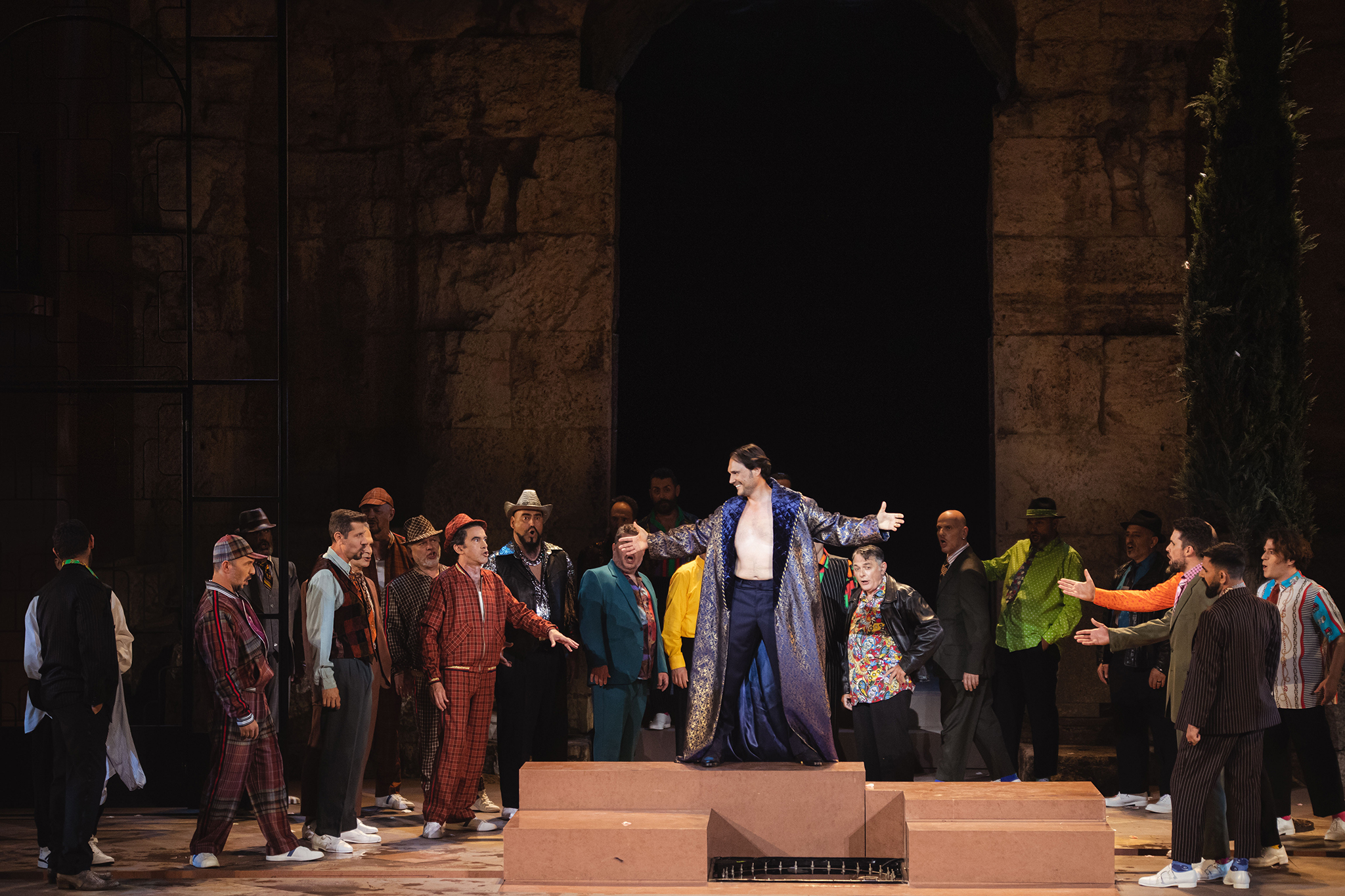 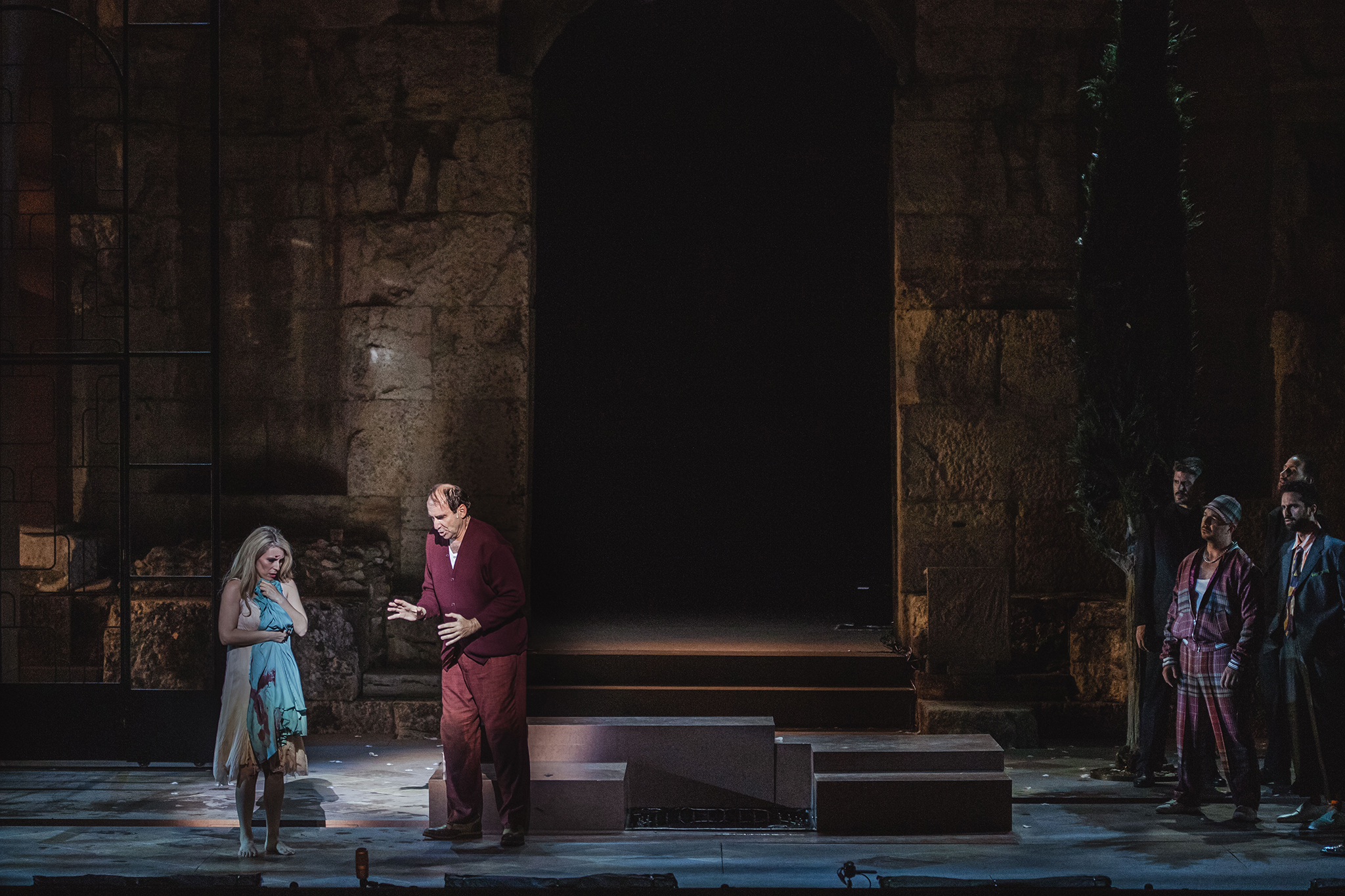 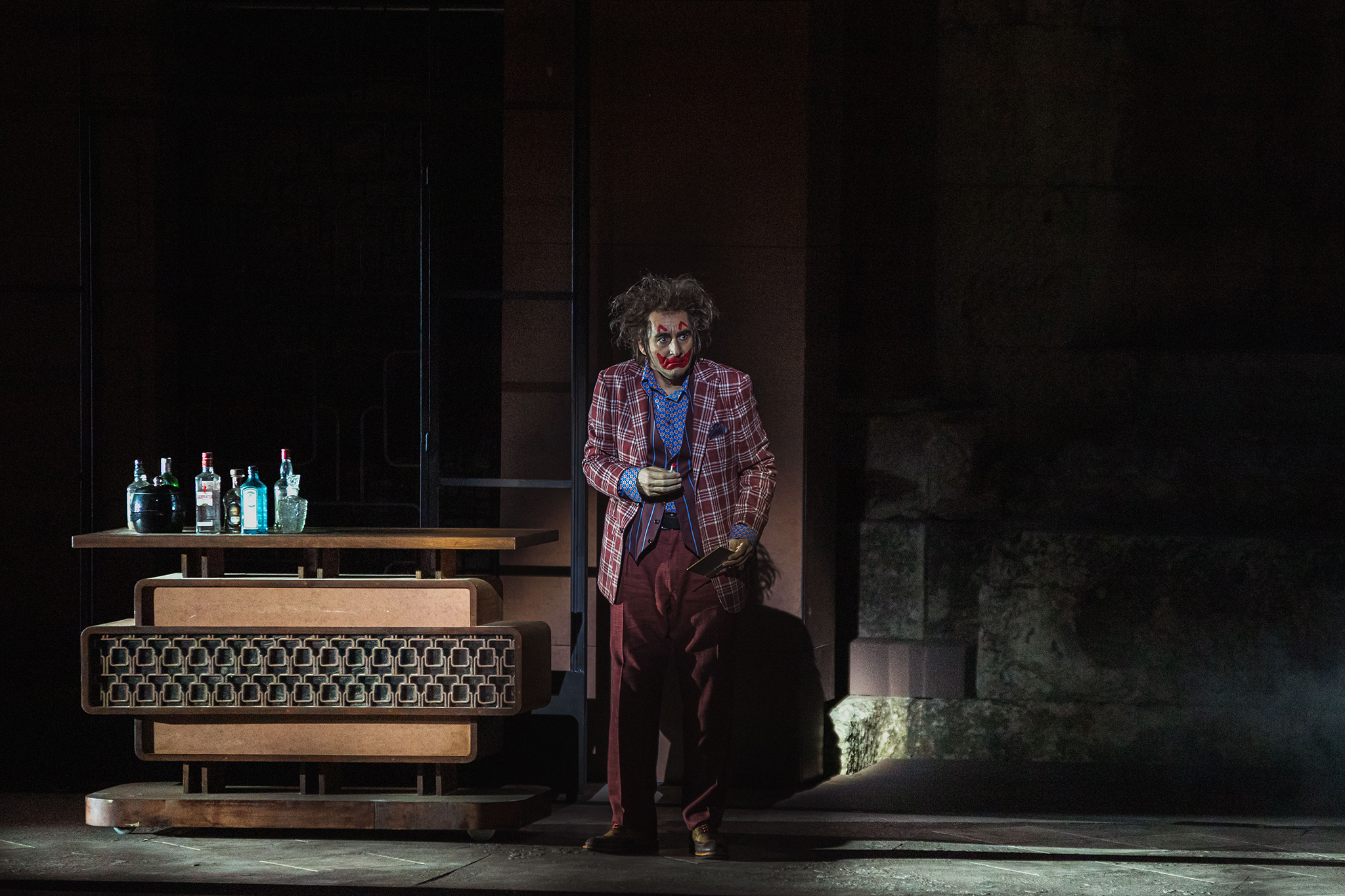