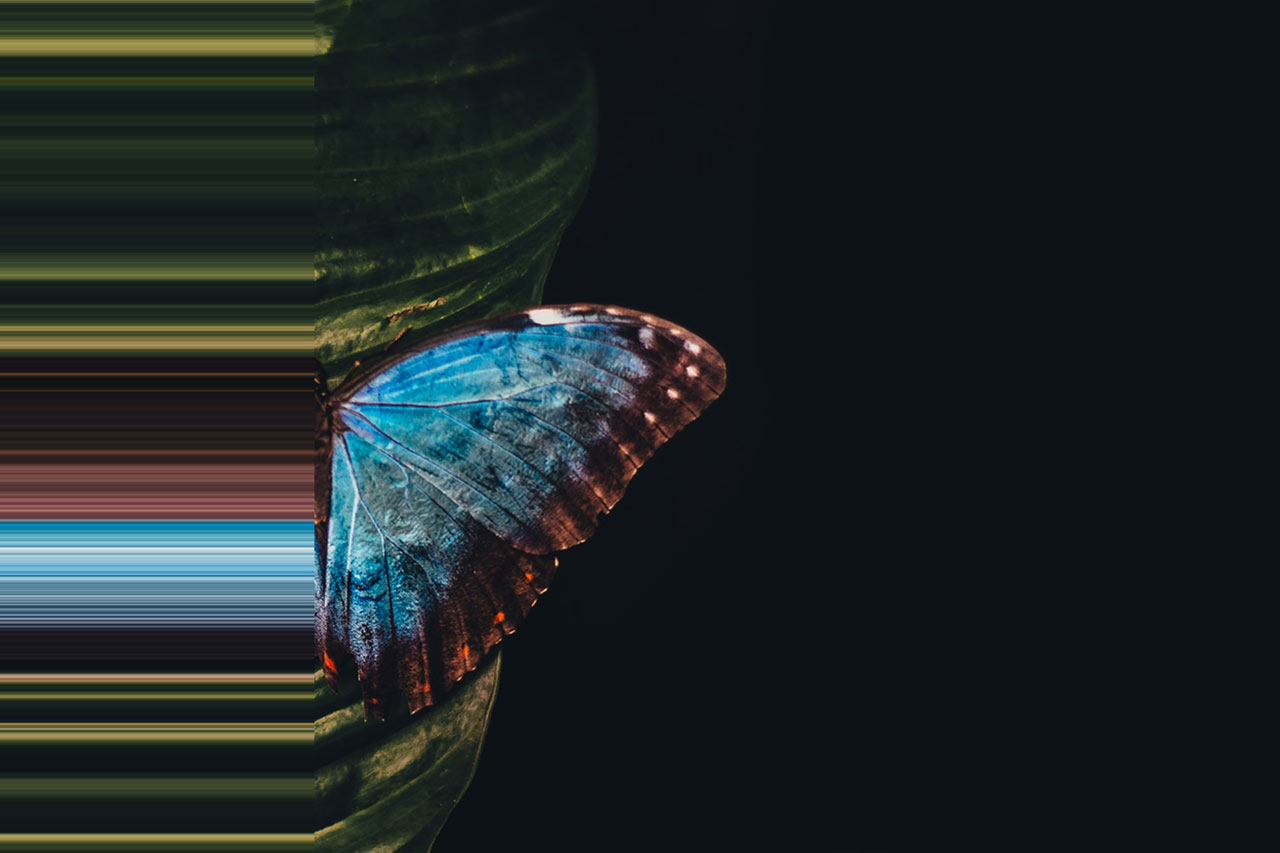 With the Orchestra, Chorus and Soloists of the GNO

In line with the restrictive measures for the protection of public health against the spread of the coronavirus (COVID-19) announced by the Greek Government, the Greek National Opera’s Stavros Niarchos Hall will operate at 30% maximum capacity, namely, with 420 seats out of a total of 1,400. Moreover, it is noted that according to the instructions of the Greek State, tickets will only be purchased online or by telephone, the use of mask will be obligatory when entering and exiting the building and throughout the performances, on either side of each seat (single or double) there will be at least two empty seats left, overcrowding shall be avoided, and the prescribed physical distance between viewers and between the audience and the stage / orchestra shall be maintained, while special protocols are in place for the cleaning, disinfection, air-conditioning and ventilation system of all areas of the GNO at the SNFCC.

In the context of the new preventive measures against the spread of the coronavirus announced by the Government, including the suspension of the operation of theatres for one month starting from 3 November 2020, the Greek National Opera announces:
The suspension of the two last performances of Madama Butterfly that were scheduled for 8 and 15 November.
All ticket holders of the suspended performances will be contacted by the Greek National Opera’s box office to be offered a refund or the possibility to exchange their tickets for another performance date or for another production. GNO Box Office call center: 2130885700 (daily 09.00-21.00).

Due to the Covid-19 pandemic the opera will be presented in Ettore Panizza’s instrumentation for reduced orchestra (ed. Ricordi)

Giacomo Puccini’s Madama Butterfly is a milestone work for the Greek National Opera, as it is the first opera ever staged by it as a newly-founded organization, on 25 October 1940, three days prior to the declaration of the Greco-Italian war. That historic premiere, held on the National Theatre’s main stage, was attended by the composer’s son, Antonio Puccini, and the Italian Ambassador in Athens Emanuele Grazzi, who, a few hours later, would deliver to the Greek government the Italian ultimatum threatening war.
This year, which marks the 80th anniversary of the Greek National Opera, Butterfly returns to the GNO’s new home, at the Stavros Niarchos Foundation Cultural Center, not only to celebrate the anniversary, but also to signal the GNO’s return to action after the pandemic, and to show that art and culture not only survive in the most adverse conditions, but also constitute the driving force for man and society.
Greek National Opera’s Artistic Director Giorgos Koumendakis notes: “We chose this great work, because this October marks the 80th anniversary of Butterfly’s historic premiere at the GNO on 25 October 1940, three days prior to the start of the Greco-Italian war. The symbolism is obvious: the GNO has always been present and courageous in very difficult times and has managed to stand upright even in absolutely challenging circumstances, both back then and today.”

Famous for its wonderful arias, strikingly melodic music and dramatic theatricality, Madama Butterfly offers timeless emotion and triggers intense feelings. Puccini does not hesitate to describe it as his favorite opera, and through his later modifications he makes his heroine’s alabaster figure a symbol of inexhaustible patience and eternal, constant love.

The opera tells the story of the fatal love affair of fifteen-year-old geisha Cio-Cio-San with Pinkerton, a lieutenant in the United States Navy. After three years of absence the lieutenant returns to Japan with his American wife, when he hears that he has a son by Butterfly. She agrees to give the child away only to Pinkerton himself and then she commits suicide.

The direction, sets and costumes of the production, which premiered in 2013 at the Odeon of Herodes Atticus and is now revived in a new version tailored to the stage of the Stavros Niarchos Hall, bear the stamp of famous Argentinian director Huge de Ana. It is an impressive production with traditional Japanese costumes, while the sets and video projections impressively illustrate the country of the rising sun on the one hand and the heroine’s psyche on the other. Video projections are designed by Sergio Metalli and lighting by Valerio Alfieri.

Ermonela Jaho was born in Albania and lives in New York. She has been described by the Economist as “the world’s most acclaimed soprano“. She is famous for her unique interpretations and her identification with the heroines she performs. She appears at the world’s greatest opera houses, from America and Australia to Europe and Asia, and she has collaborated with celebrated soloists, directors and conductors. Specifically for her interpretation of Madama Butterfly the reviews have been raving, with the most praising among them being Independent’s about Jaho’s interpretation at Covent Garden: “Jaho is the best Madama Butterfly that London has seen in years”.

Latvian soprano Kristīne Opolais first appeared in Greece in the early stages of her career in 2008 in Greek National Opera’s Tosca, leaving excellent impressions. Right after that, her career was launched and very soon she emerged as one of the world’s most sought-after sopranos, as she impressively combines a unique stage presence with the dramatic effect and metal in her voice. Her Met debut in 2014 gave her global recognition since just in two days she performed with huge success both Butterfly and Mimì in La bohème. In fact, that same year, after her appearances at the Royal Opera House, London, Telegraph described her as the “the leading Puccini Soprano of today”.

The cast is completed by tenors Gianluca Terranova and Dimitris Paksoglou, baritones Dionysios Sourbis and Nikos Kotenidis, mezzo-soprano Chryssanthi Spitadi, and a multitude of Greek soloists.


Madama Butterfly at a glance
THE COMPOSER
Giacomo Puccini was born in Lucca, Tuscany, on 22 December 1858. The fifth of seven children, he was born to a family that had supplied his native city with musicians –church organists, conductors and composers, mainly of sacred music– for the previous four generations. He remains to this day one of the most renowned composers of Italian opera, as his works are regularly performed throughout the world. His musical style was already clearly developed by his third opera, Manon Lescaut (1893), while his next three compositions, La bohème (1896), Tosca (1900) and Madama Butterfly (1904), firmly established Puccini as Verdi’s heir. The beautiful melodies and intense theatricality that define his operas successfully met the demands of their time. His last opera, Turandot (1926), remained incomplete due to his death in 1924.

THE OPERA
A tragedia giapponese to a libretto by Giuseppe Giacosa and Luigi Illica, Madama Butterfly is based on the one-act play Madame Butterfly (1900) by American playwright David Belasco, itself based on an 1898 short story by another American writer, John Luther Long. This, in turn, was partly based on Pierre Loti’s French novel Madame Chrysanthème (1887). The opera recounts the tragic love of Cio-Cio-San, a fifteen-year-old geisha, for Pinkerton, an American naval officer. After a three-year absence the officer returns to Japan with his American wife, having learned that he has a son by Butterfly. She agrees to give Pinkerton the child, but commits suicide shortly afterwards.

PREMIERES
Madama Butterfly’s first, two-act version received its premiere at the Teatro alla Scala, Milan, on 17 February 1904. A revised, three-act version was performed on 28 May 1904 at the Teatro Grande, Brescia. The version in which the opera is usually presented nowadays is based on the Opéra Comique version, which was staged in Paris on 28 December 1906.

ACT I
Nagasaki, early 20th century. Benjamin Franklin Pinkerton, a lieutenant in the United States Navy, is arranging with Goro, a Japanese marriage broker, the last details of his upcoming marriage with Cio-Cio-San, a fifteen-year-old geisha also known as Butterfly. Pinkerton informs Sharpless, the United States consul, that in Japan a husband can break up his marriage anytime. In vain Sharpless tries to warn him that the adolescent girl is bound to take the marriage seriously.
The bride arrives with her friends and relatives. She shows Pinkerton her few possessions, including the narrow sheath that contains the dagger with which her father killed himself. Right after the ceremony the Bonze, Butterfly’s uncle, arrives and denounces her for having forsworn her faith, urging the rest of her relatives to do the same. Cio-Cio-San is left alone with Pinkerton, who tries to comfort her. Suzuki, her maid, helps her dress for her wedding night and Butterfly joins Pinkerton in the garden.

ACT II
Three years later, in the same residence, Cio-Cio-San is alone with Suzuki. Even though Pinkerton left for his home country shortly after the wedding and never returned, Cio-Cio-San remains faithful to him and dreams of the day that she will see him once again. Sharpless appears: he wants to prepare her for Pinkerton’s return with his American wife. Cio-Cio-San refuses to listen and shows Sharpless her son by Pinkerton. She decorates the house for his arrival and settles to a night of waiting next to Suzuki and the child.
As morning breaks, Cio-Cio-San, who stayed up all night, takes her son to another room and sings him to sleep. Pinkerton and Sharpless appear and ask Suzuki to speak to the former’s American wife. Pinkerton recalls the past. Filled with remorse, he chooses not to face Cio-Cio-San and leaves. Butterfly enters, looking for her husband. Much to her dismay she sees the strange woman in the garden and is informed by Sharpless and Suzuki that Pinkerton will never return to her. She seems to accept the situation and even agrees to give Pinkerton their son, if he comes to take him himself. She then asks to be left alone and decides to end her life. In an effort to stop her, Suzuki sends in her son. Butterfly bids him farewell, ties his eyes and commits suicide just as Pinkerton arrives. 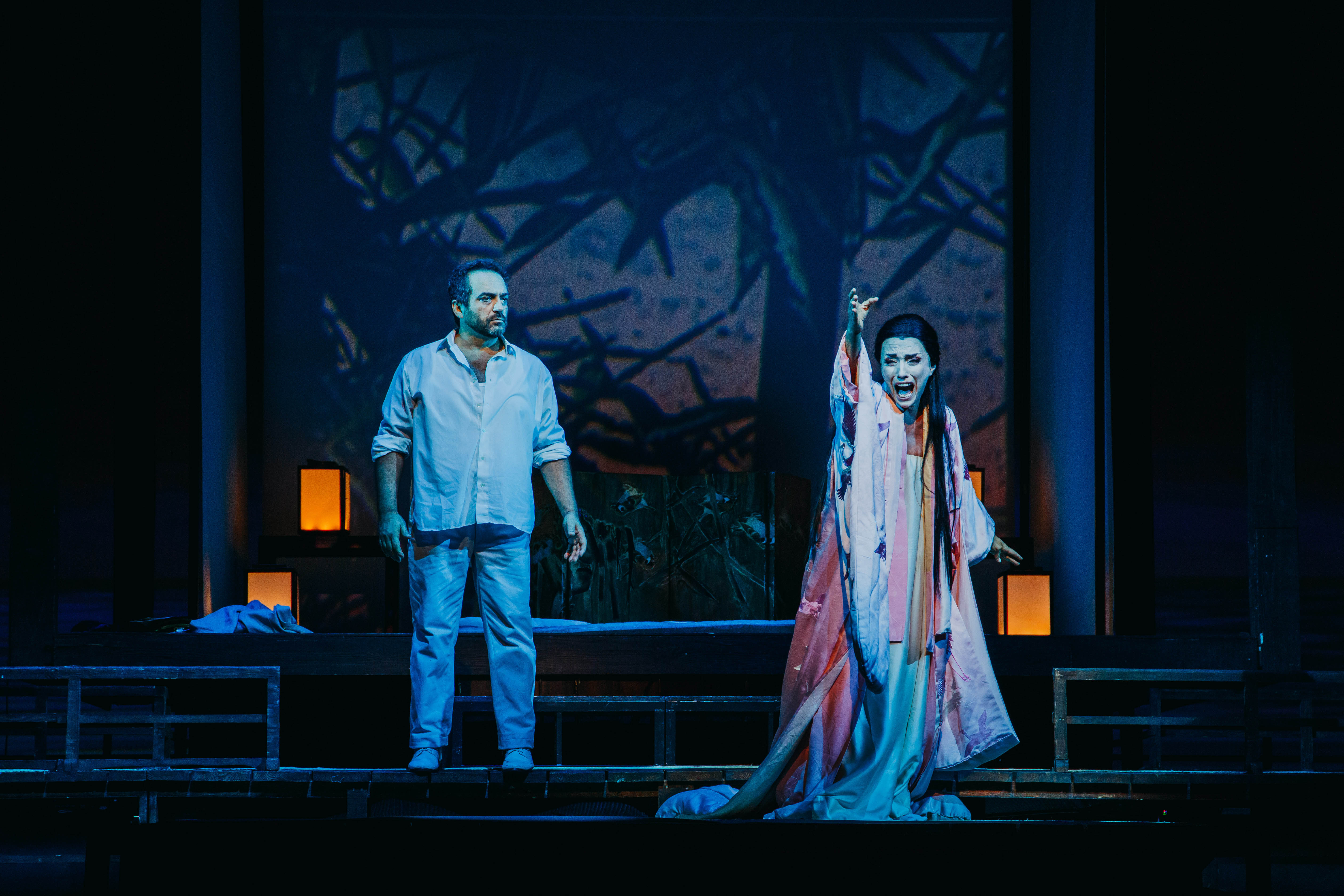 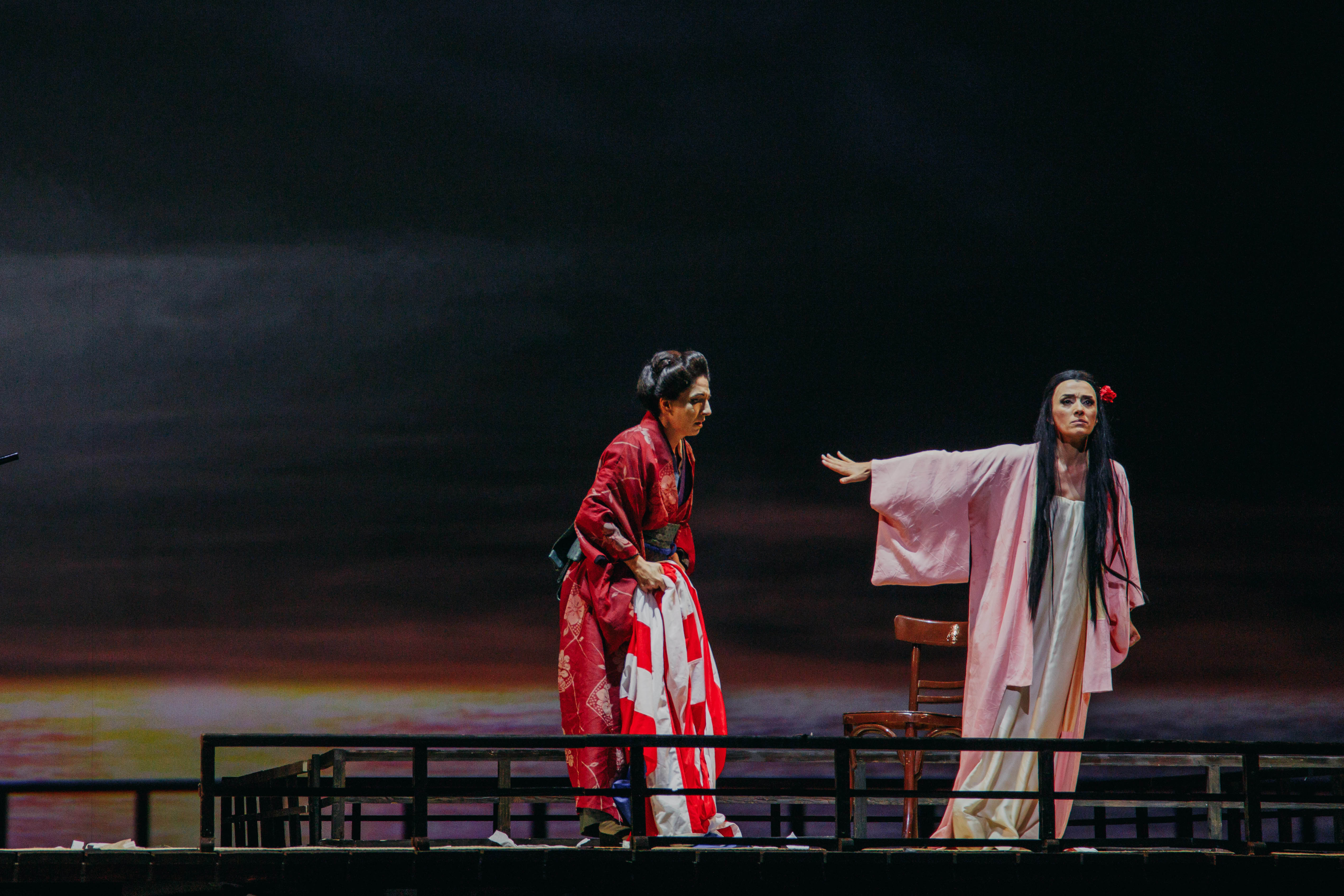 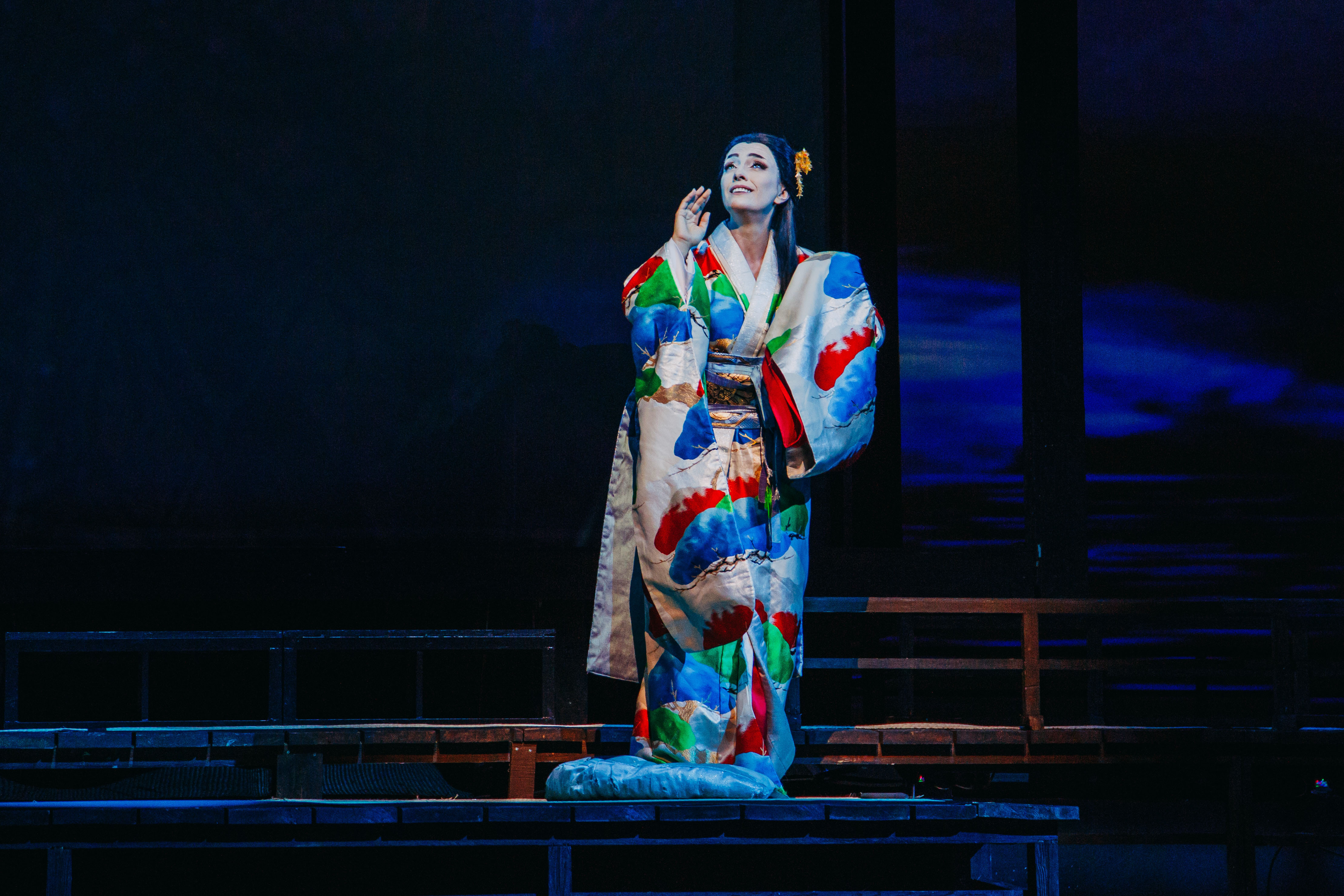 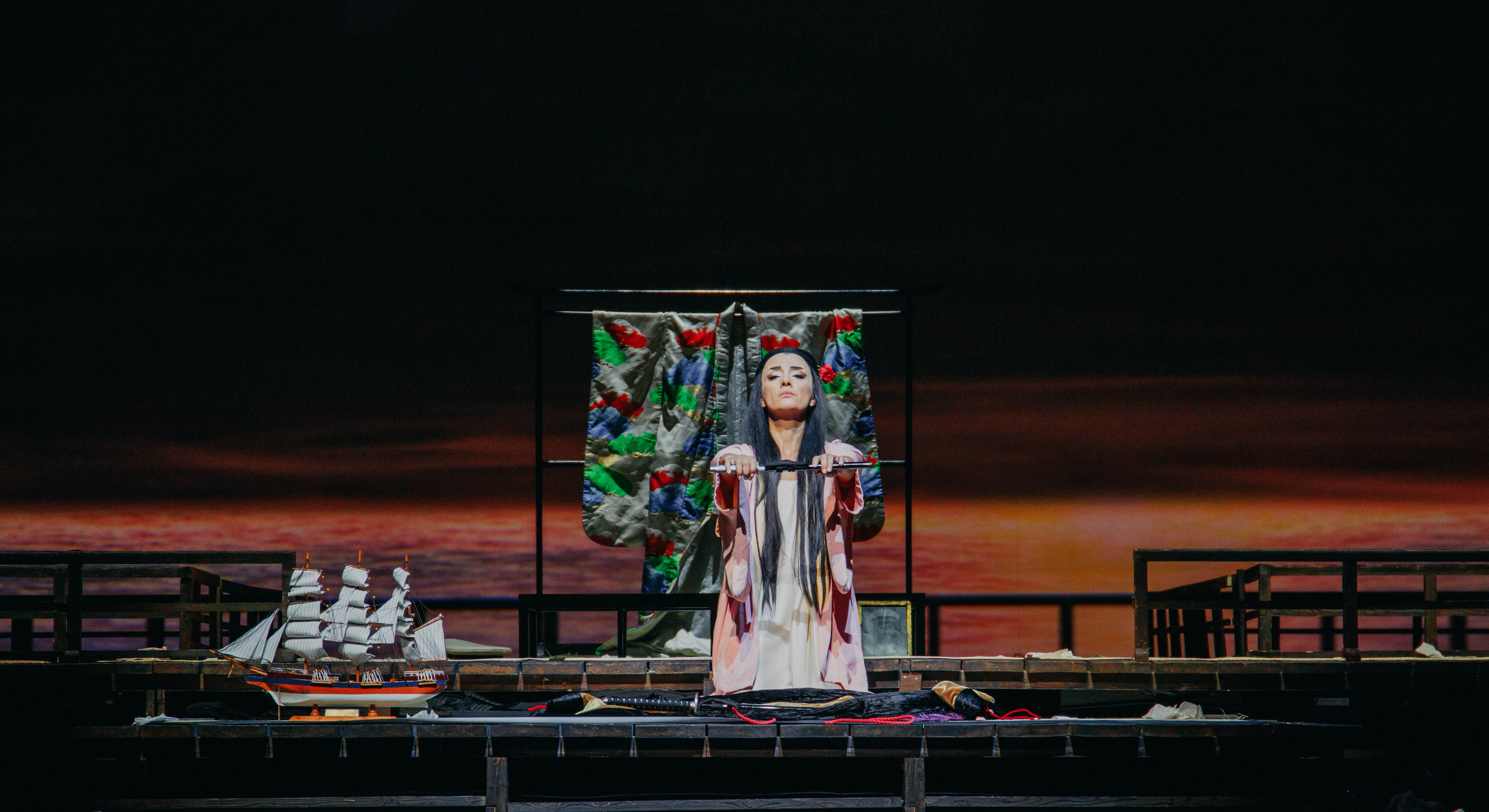