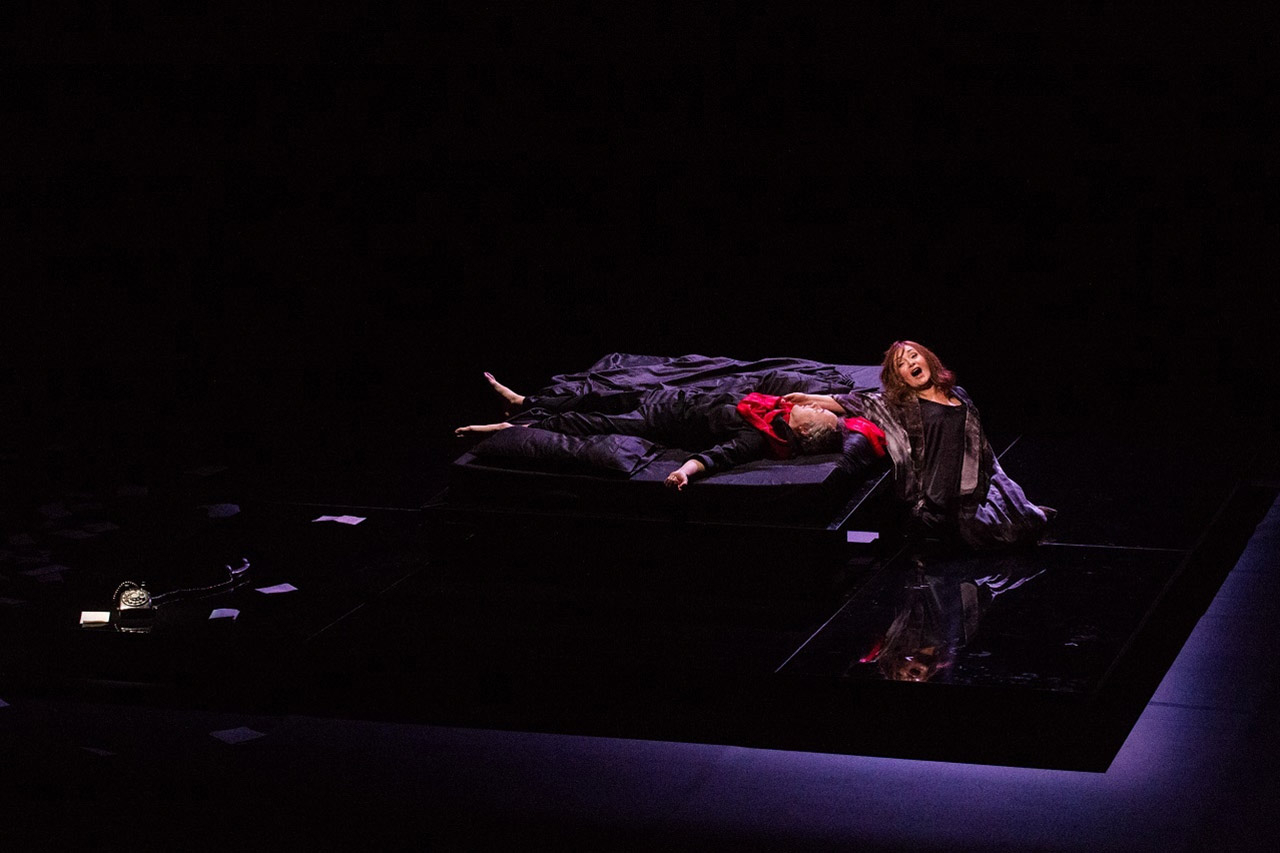 IN THE ROLE OF WOMAN
Elena Kelessidi

IN THE ROLE OF MAN
Aimon Garofallou

The great one-act opera La Voix humaine by Francis Poulenc, based on Jean Cocteau’s monologue of the same title, returns to GNO Alternative Stage for two final performances. In the role of Woman Elena Kelessidi, a famous singer and an equally stunning actor. In this new production, Panaghis Pagoulatos rereads La Voix humaine with the eyes of the 21st century and directs the work in a completely different and subversive way. The one and only Elena Kelessidi is called to live the last forty minutes of a relationship and may be of a life… “Elle”, She, through a long telephone call with interruptions and pauses, experiences the painful epilogue of a love affair with her beloved one, “son chéri”. A monologue, a "music confession", according to the composer, about betrayed love and thelove and theabsolute loneliness beyond gender, age and time.

After forty years of friendship with Jean Cocteau, Francis Poulenc composed in 1958 this one-act “lyric tragedy” based upon the theatrical monologue of the same title that the author wrote in 1928. The inspiration for both these creators was the end of a painful love affair. In the beginning, his publisher had proposed that Poulenc composed the monologue for Maria Callas, who at that time was at the apogee of her fame. However, the composer chose to collaborate with the French soprano Denise Duval, whose tempestuous love life he knew of and who had just recently performed Blanche in his opera Dialogues des Carmélites, which had been successfully presented at La Scala in Milan in 1957. Duval helped to transcribe the play for the opera and later on she was also the first one to interpret the role.

He studied physics at the University of Athens and continued with post-graduate studies in acoustics and epistemology in Paris, as well as theatre studies at Sorbonne University. Since 1988 he has been working as an assistant director and as a director in France, Belgium, Switzerland, Italy, Germany, Ireland, Israel, etc. Since 2001 he has been collaborating with the GNO, Athens Festival, Opera of Thessaloniki, National Theatre of Greece, Athens Chamber Opera, among others. In Greece he has directed the productions Dido and Aeneas (Purcell), The Telephone (Menotti), Le Mariage aux lanternes (Offenbach, Greek premiere), L’Olimpiade (Paisiello, world premiere), Il ritorno d’Ulisse in patria (Monteverdi), Le toréador (Adam, Greek premiere). For the GNO he directed Alcina (Händel), Der Schauspieldirektor (Mozart), La Serva padrona (Pergolesi), three one-act works for GNO’s Experimental Stage, Tosca (in collaboration with Nikos S. Petropoulos), Aida at the Odeon of Herodes Atticus. From 2011 to 2017 he worked as artistic coordinator at the Opera and Philharmonic Orchestra of Nice in France. Since 2017 he has been Director of Artistic Programming & Casting at the GNO.

He was born in Thessaloniki, Northern Greece, where he started working professionally as a photographer and lighting designer in theatre for dance and music performances. He has collaborated with numerous artists.

Greek soprano, she was born in Kazakhstan and studied at the Conservatory of Astana. She made her debut in Greece as Konstanze in Die Entführung aus dem Serail (Greek National Opera, 1993/94). She has sung many leading roles in prestigious stages and theatres worldwide such as Vienna State Opera, Metropolitan Opera (New York), Opera Bastille (Paris), in Berlin, Hamburg, Munich, Amsterdam, Zurich and Tokyo, as well as in major festivals. For eleven years she had been performing at the Royal Opera House (Covent Garden, London) such roles as Violetta (La traviata), Queen of Shemakha (The Golden Cockerel), Cleopatra (Giulio Cesare in Egitto), Mimì (La bohème), Luisa (Luisa Miller), Giulietta (I Capuleti e i Montecchi), Liù (Turandot), Amina (La sonnambula), Antonia (Les Contes d’Hoffmann), Marguerite (Faust) and Emilia Marty (Vĕc Makropulos). She has collaborated, among others, with Plácido Domingo, Kent Nagano, Bruno Campanella, Riccardo Chailly and Yehudi Menuhin. She is a permanent soloist of the Greek National Opera, where she has sung leading roles in numerous productions and artistic events (“The Suitcase Opera”, “Pocket Concerts”, etc).

She holds a diploma in piano (class of M. Kokkalis), harmony, counterpoint and fugue (class of G. Kabanas and S. Klapsis) from the National Conservatory of Athens. She continued her piano studies in Athens and Paris with E. Mouzalas, A. Lefèvre and B. Rigutto. She is a graduate of the Department of Music Studies of the University of Athens. Her collaboration with the Greek National Opera started in 2006, and since 2009 she holds the position of Studienleiterin and Cast Artistic Advisor. During this period, she has collaborated with some of the most renowned Greek conductors, among which L. Karytinos, E. Voudouris, V. Christopoulos, G. Petrou, M. Michailidis, M. Logiadis, M. Chryssicos, Z. Tsokanou. She has teamed with K. Karydis and the Vienna Philharmonic Orchestra, as part of the Salzburg Festival production of Die Zauberflöte (June-August 2018), where she was in charge of the music preparation as well as playing the continuo part during the performances.

Born in Athens, he started his first music lessons with his grandfather, the composer Dionysios Visvardis. He studied piano and theory at the National Conservatory of Athens, the Alex Tournaissen Conservatory and the Richard Strauss Conservatory in Munich. He also studied at the Vienna National Conservatory and the Vienna Music Academy, where he specialized in chamber music, soloist accompaniment and Lieder. Since 1995 he has been working at the Greek National Opera. He has performed in concerts throughout Greece, in most European countries, as well as in Cyprus, Egypt, Turkey and Latin America.