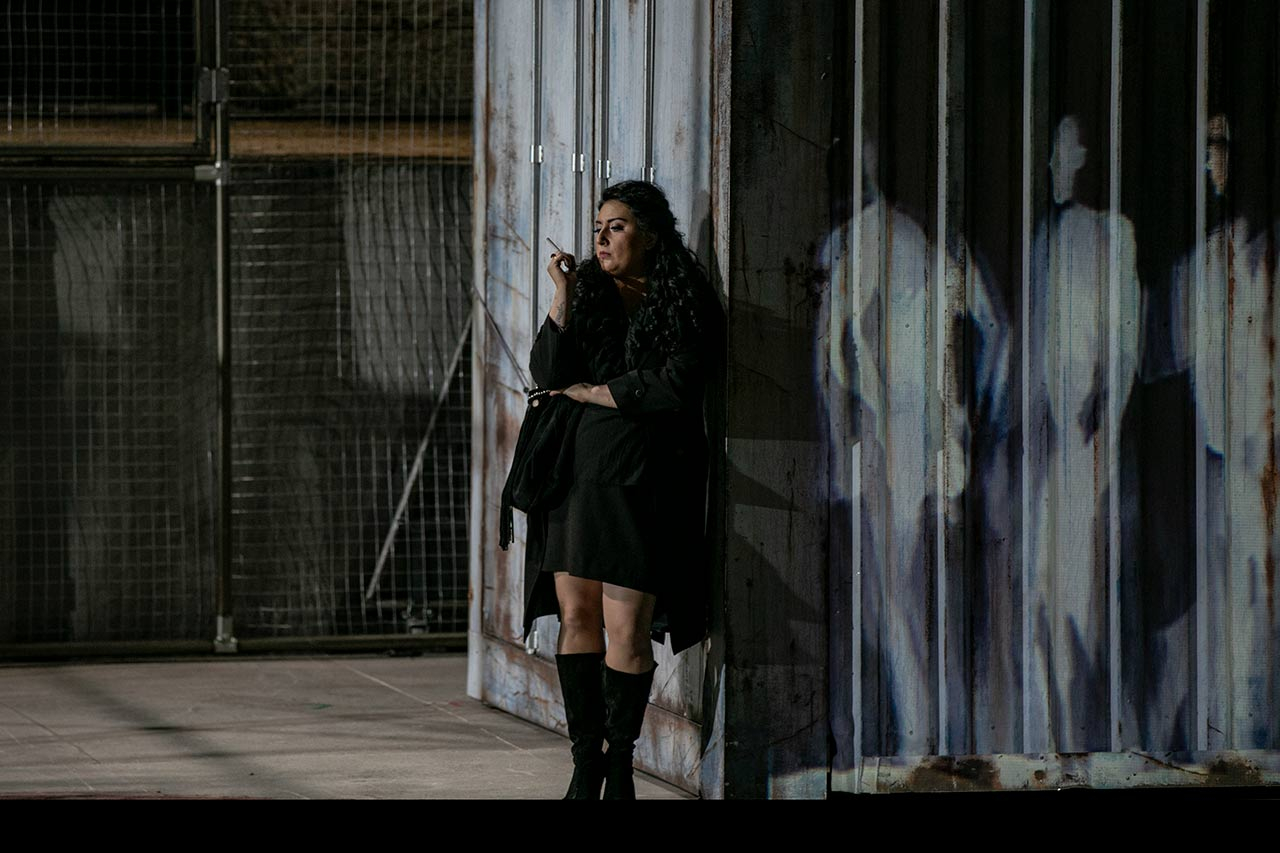 With the GNO Orchestra, Chorus, Soloists, Ballet and Children’s Chorus, as part of its educational mission.

In French with Greek and English surtitles

As part of the Athens Festival

Symbolizing love and liberty, the most popular opera in the French repertoire is being brought back to the Odeon of Herodes Atticus Theater by the GNO, directed by the famous British director, Steven Langridge, currently Artistic Director of the Gothenburg Opera.
Langridge’s Carmen was first staged at the Odeon of Herodes Atticus Theater in 2016 and is a contemporary, pointed, timely version set in a Europe of closed borders and poverty. Working with Giorgos Souglidis who designed the impressive sets and costumes, Giuseppe di Iorio who created the otherworldly lighting and Thomas Bergman who devised the ethereal video projections, Langridge has created a modern but also timeless setting for Carmen’s tale; “a tale about borders and poverty, freedom and slavery. A tale about today,” as the director himself put it.
One of the most iconic operas around, Carmen continues to provoke even today, just like when it first saw the light of day 142 years ago. An unconventional storyline, expressed through the then equally unconventional, but now extremely popular, music of Georges Bizet. The heroine of the piece defends her freedom and right to choose her lovers, not for them to choose her. She is a threat to male-dominated, patriarchal societies. Her choices threaten their very foundations. The only solution: get rid of her. The love-struck, ‘betrayed’ Don José takes on the task.

The emblematic and demanding role of Carmen will be interpreted by one of the top lyrical artists, on her first time in Greece. Anita Rachvelishvili, the star of Teatro alla Scala, Metropolitan Opera and Paris Opera, in considered the most successful contemporary Carmen. With her imposing, fierce, wild figure, with an impressive vocal range and quality, Rachvelishvili, who started from Georgia and concurred the world, seems like the ideal personality for the particular role.

The mezzo’s career is similar to a fairy tale: At 25, when she was a student at the Scala Adacemy in Milan, she auditioned for the role of Mercédès in Carmen, for the opening production for the season 2009/10 at Teatro alla Scala. Impressed by her voice and presence, the conductor of the production and one of the most prominent conductors worldwide, Daniel Barenboim gave her the role of Carmen, with Jonas Kaufmann as her co-protagonist. Her debut created a sensation and was enthusiastically received by the hard to please Italian audience, and thanks to the production’s television broadcast, Anita became popular worldwide: New York, Berlin, Munich, Seattle, San Fransisco, Toronto, Verona, Paris, London, Rome, are only a few of the big cities where she has interpreted the role of Carmen. But the young mezzo from Georgia has not only shined in the role of Carmen. A few months ago, the 33-year old Anita “stole the show” in the Metropolitan production of Il Trovatore, according to The New York Times, interpreting the role of Azucena. This period, just before her performances in Athens, she interprets the role of Azucena at the Paris Opera, and after the Odeon of Herodes Atticus she will perform at the Metropolitan, starring in the productions of Samson and Delilah, Aida, and Adriana Lecouvreur. Her presence in Athens was made possible thanks to the generous Mytilineos sponsorship.

The second cast of the role of Carmen belongs to the renowned American Kate Aldrich. Aldrich has performed the role with great success in Munich, Berlin, Metropolitan, Zurich, Lyon, Verona, Beijing, among others. Since 2000, when she began her career at the Verona Arena, Aldrich has starred in many productions in the biggest lyrical theaters worldwide, and has collaborated with prominent directors, such as Franco Zeffirelli, Robert Carsen, John Copley, and others, and with prominent conductors, Kirill Petrenko, Jérémie Rhorer, Plácido Domingo, among others.

In the role of Don José the tenors Pavel Černoch and Dimitris Paksoglou. Czech Pavel Černoch has marked an impressive career in important lyrical theaters, such as Teatro alla Scala, Paris Opera, San Carlo (Napoli), Zurich Opera, Teatro Real, Bolshoi Theater, Bregenz Festival, among others. He has made impressive collaborations with opera conductors and directors - recently he collaborated with Krzysztof Warlikowski and Damiano Michieletto in Paris and Rome, and after the Odeon of Herodes Atticus he will star in the new production of Jenůfa in Amsterdam, directed by Katie Mitchell, and in Lady Macbeth of Mtsensk, directed by Warlikowski in Paris.

GNO tenor Dimitris Paksoglou had impressed with his interpretation at the first staging of Carmen in 2016, but also with his appearances in many GNO productions, such as Tosca, Makropulos Affair, etc.

The role of Escamillo will be interpreted by two renowned GNO baritones, Dionyssis Sourbis and Dimitris Tiliakos. In the role of Micaëla Maria Mitsopoulou and Myrsini Margariti.

With the participation of the GNO Ballet (Movement: Dan O'Neill - Fotis Nikolaou).

The Greek National Opera Orchestra will be conducted by Lukas Karytinos.