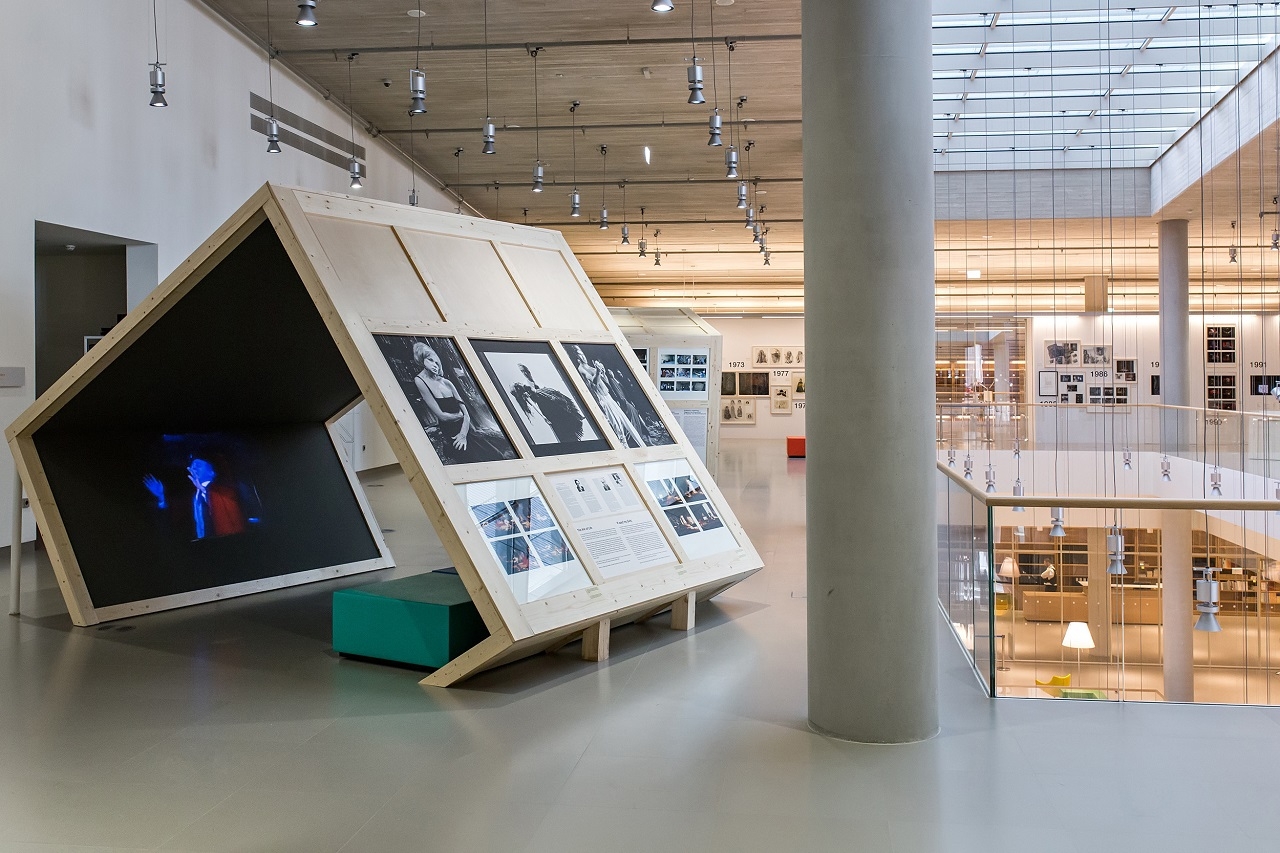 CURATOR OF THE PERFORMING ARTS DEPARTMENT OF MIET/ELIA
Constantina Stamatoyannaki

An exhibition dedicated to the work of the renowned Greek set designer-director and former Artistic Director of the Greek National Opera
Opening: Sunday 4 February at 18.00 |

Curator of the exhibition, Adonis Volanakis, will guide tours on the following dates:

).
For special guided tours for schools or institutions and for tours in English: This email address is being protected from spambots. You need JavaScript enabled to view it.

Curator of the exhibition, visual artist Adonis Volanakis, apprenticed to Stefanos Lazaridis and collaborated with him at the English National Opera. Stefanos Lazaridis' tribute exhibition is the first solo exhibition of his artistic oeuvre globally. Lazaridis, based in London, extended the range of scenography to dramaturgical visual spaces, by raising meaningful questions rather than giving “scenographic solutions”, not only on Europe’s most important operatic stages but also in bigger spaces, like stadiums, where he designed historical performances breaking away from all conventional designs.
The exhibition unfolds a visual timeline starting from the beginning of his career with paintings of set and costume designs, in which one can discern the influences from his apprenticeship with Nicholas Georgiadis, another world-wide famous artist; it continues with works of mixed techniques, collages and models, as well as videos from performances and interviews. The exhibition has a playful character and is completed by photographs from his own research on visual arts, his director’s notes on texts and letters. What is highly impressive in his work is the fact that it is hard for anyone to tell the difference between the photographs of his exceptionally detailed models and the photographs of the actual performances.
The most common leitmotif in Lazaridis’ work is the cube; that is also the inspiration of the exhibition. It is thus in cube rooms where his most important collaborations with theater and opera directors evolve, such as with the famous Yuri Lyubimov - on Dostoyevsky’s The Possessed (1985) in London, Paris and Milan and Rigoletto (1983), which caused a scandal among the Italian conservative audiences; with David Pountney - transforming the history of the English National Opera with their numerous collaborations in the 80’s and their historical productions of The Flying Dutchman (1989) and Nabucco (1991) at the Bregenz Opera on the Lake in Austria with clear reference to the ancient Greek theater of Epidaurus; with Steven Pimlott - on Carmen (1989) at Earl’s Court with 15,000 spectators every night; and with Keith Warner - on Lohengrin (1999) in Bayreuth and Wagner’s tetralogy The Ring of the Nibelung (Der Ring des Nibelungen) at Covent Garden.

In the rest of the cubes one can come across the productions in which Lazaridis acted both as a director and a set-designer: the successful tour of Duran Duran in America (1993), Orpheus and Eurydice (1993) for Sydney Opera House, Oedipus (1989) and the Bluebeard's Castle (1990) for the Scottish Opera and Dimitris Dimitriadis’ the Beginning of Life (1995) at Amore Theater in Greece. In 2000, in his role as chief visionary, he undertook the artistic and visual design of eight productions for the Italian Season at the English National Opera.

Since August 2013, the Stefanos Lazaridis archive is kept at the National Bank Cultural Foundation (ELIA/MIET), following the generous donation of his late partner, Timothy Williams. It covers a period from 1964 to 2010 and includes exhibits, designs and models from the artist's entire artistic creation.

Artistic Director of the Greek National Opera, Giorgos Koumendakis, who programmed and organized the Stefanos Lazaridis tribute, notes: "Our three-year artistic programming moves towards a renewal path that will expand the prospects that Stefanos Lazaridis' tenure at the Greek National Opera opened up. In this exhibition, the Greek audience will have the opportunity to discover the range of his work, through models, photographs and archive material that covers nearly forty years of creation. A small homage to the renowned Greek opera artist, who left a lasting imprint".

The Greek National Opera, in its first artistic season at the Stavros Niarchos Foundation Cultural Center, pays tribute to set-designer and director Stefanos Lazaridis (1942-2010) by mounting two of the productions he himself had commissioned during his short term as GNO’s artistic director, from January 2006 to July 2007.

Born in Dire Dawa, Ethiopia, educated in London, Lazaridis was initially for five years assistant to another distinguished Greek set-designer, Nicolas Georgiadis. He created his first set design in 1967. The very next year, his scenography for The Knight Errant, a ballet choreographed by Antony Tudor and mounted by the London Royal Ballet, caused much interest. He started to collaborate with the Royal Opera and the English National Opera, forming progressively his own visual language, keeping his distance from any decorative concepts and seeking the deeper meaning of works and the theatricality in productions. He was interested in the context under which an opera had been written and the reasons that led composers to choose their topics, aiming to gain a better understanding of each work’s goals.

Most of the 30 productions he designed for the English National Opera alone in the 80’s established Lazaridis as one of the most important set designers in Britain. The productions he designed for the opera festival on Lake Bregenz in collaboration with British director David Pountney (Der fliegende Holländer – 1989, Nabucco – 1991, Fidelio – 1995), as well as a production of Carmen in collaboration with Steven Pimlott at Earl’s Court in London (1989), drew international interest. These were spectacles for the wider audience, the likes of which in terms of quality of reading and performance had never been seen until then. They were productions which treated opera as a work for the stage and not just as a mere singing event. The fact that Lazaridis was invited to Bayreuth in 1999 to work on Lohengrin –a performance that turned out to be highly successful– and that he was commissioned to design the entire Ring of the Nibelung [Der Ring des Nibelungen] at the Royal Opera (2002-2006) –both projects were directed by Keith Warner–, seemed self-evident next steps. Even before these projects were assigned to him The New Grove Dictionary of Opera (MacMillan, London 1997) dedicated half a page to Lazaridis' contribution to opera. His familiarization with large-scale productions was capitalized also on the field of pop music – like on the spectacular tour of British new wave band Duran Duran in 1993, in the USA, a first of its kind, which was directed and had its stage designed by Lazaridis.

With his experience, knowledge and connections, and in the belief that an opera performance should not be treated in a painlessly decorative way but that, as a performing art, it should receive the same attention as any other dramaturgical play, Lazaridis arrived at the Greek National Opera in January 2006. His intention was to engage the important, timeless repertory works in a dialogue with contemporary audiences, to address today’s spectators in a way similar to the one composers of all times seeked to address their own audiences. Therefore, he invited to the Greek National Opera top opera directors from Greece and abroad, who could measure up to his ideas and visions. He chose soloists who had the right voice quality for parts they could equally support with both their looks and acting skills.

The fact that Lazaridis placed emphasis on the stage image did not mean he underestimated music. One of his first decisions was to expand the orchestra pit of the Olympia Theatre, so that it could fit musicians instead of and therefore meet more successfully the demands of a larger part of the standard operatic repertory. At the same time, a second venue was rented so that the Greek National Opera Ballet productions would always be accompanied by an orchestra, instead of recorded music, as was the common practice until then.

As a Puccini admirer, among the first works Lazaridis chose during his term were two of the Italian composer’s most emblematic operas. Graham Vick undertook to direct La Bohème, a youthful work, set in today’s Athens. Accordingly, Nikos Petropoulos’ direction of Tosca followed up ideas that Lazaridis had worked upon together with Jonathan Miller in their own production of the same work in 1986, in Florence.

The two productions are revived in the GNO’s programme during the current artistic season, as a small tribute to a cultured visionary man, whose very short term in the GNO still is a source of inspiration. Two of Lazaridis productions presented nowadays in London are: The Mikado at the English National Opera and Wagner's tetralogy The Ring of the Nibelung, which is re-staged at the Royal Opera House in 2018.