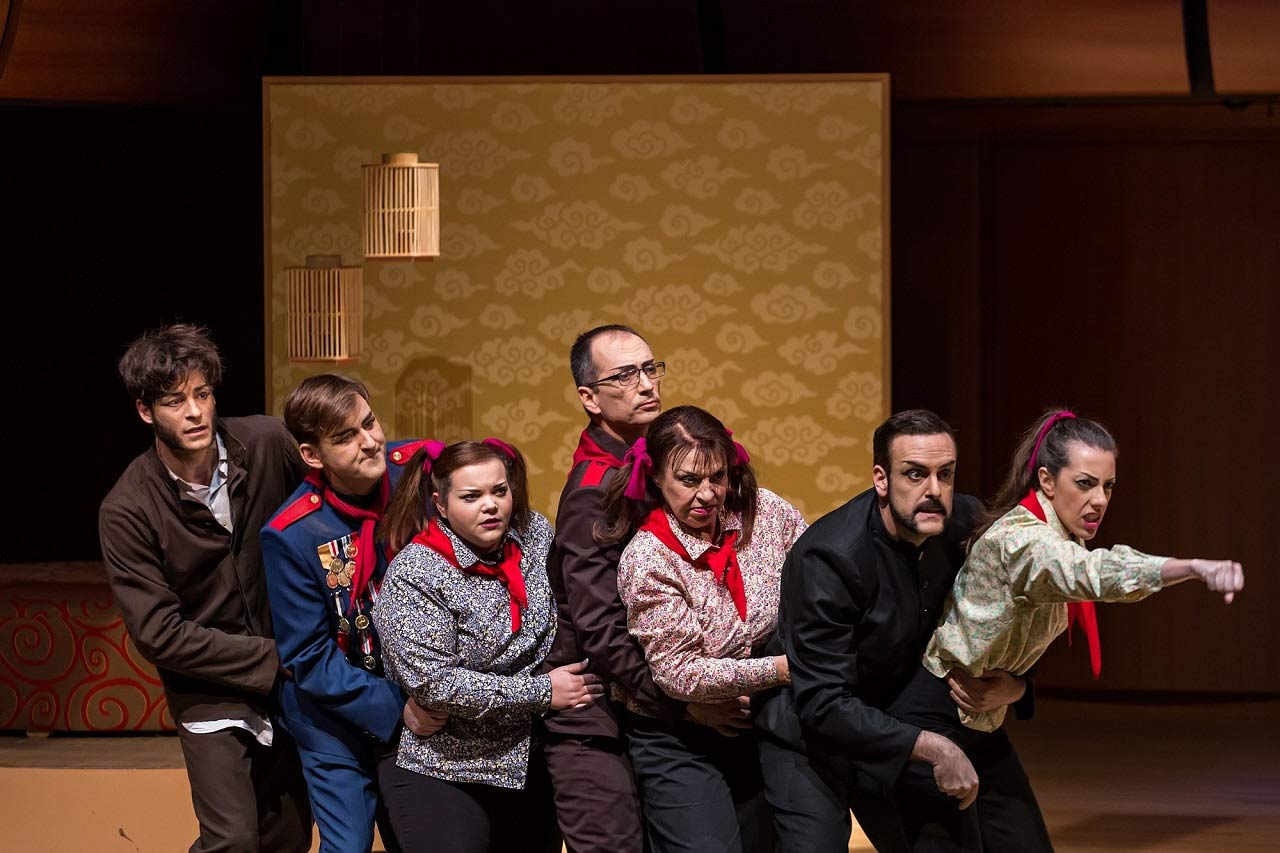 With the participation of a 6-member music ensemble

In a co-production with the “Rafi” music theater company, one of the most active companies of its kind in recent years, the Alternative Stage presents one of the most popular music theater works of all time in a Greek premiere; the exotic comic opera The Mikado (1885). Its creators, William Schwenck Gilbert and Arthur Sullivan, leading lights in the field of English comic opera and forerunners of the Marx Brothers and Monty Python, were inspired by the atmospheric Far East, and composed this acerbic satire on the socio-political mores of the 19th century. Violence, corruption, populism, hypocrisy and Puritanism are all in the firing line of this ingenious artistic duo, who satirize their times with humor and lightheartedness. Akyllas Karazisis directs the work. Commissioned by the GNO and the Rafi Company for the purposes of the co-production, two leading translators, Giorgos Tsaknias (who will deal with the prose) and Katerina Schina (who will adapt the lyrics to Greek) will adapt the libretto.
The librettist William Schwenck Gilbert is said to have been inspired to write the work by a Japanese sword he saw hanging in a public library. At that time theater companies from Japan were touring London, helping spread the sophisticated orientalism which the British public were going mad for. Setting the action in a remote geographical location made it easier for the experienced writer to talk fearlessly about issues afflicting English society at that time: unending political scandals, abuses of power and the democratic deficit. The specific choice also allowed him to use humor and irony to satirize the prevailing Puritanism of the Victorian period, paving the way for writers such as Oscar Wilde and Bernard Shaw. In the magical land of Titipu where the Great Emperor (the Mikado) had banned flirting, philandering tailors become executioners so that they don’t have to behead themselves, parliamentary deputies declare themselves “masters of everything” and flirting, although banned, flourishes in the most unimaginable forms. The composer Arthur Sullivan considered The Mikado to be his masterpiece, where he skillfully blended ‘light’ British operetta and ‘serious’ English opera, where “humor, satire, characters and high quality music exist in marvelous balance”. It is worth noting that The Mikado also inspired George and Ira Gershwin musicals on Broadway and Hollywood. George Gershwin considered the Gilbert and Sullivan duo to be his role models. The work was a roaring success from the very first performance in 1885 (around 150 companies all over the world had included The Mikado in their repertoire by the end of the year) and remains one of the most popular work of music theater of all times.