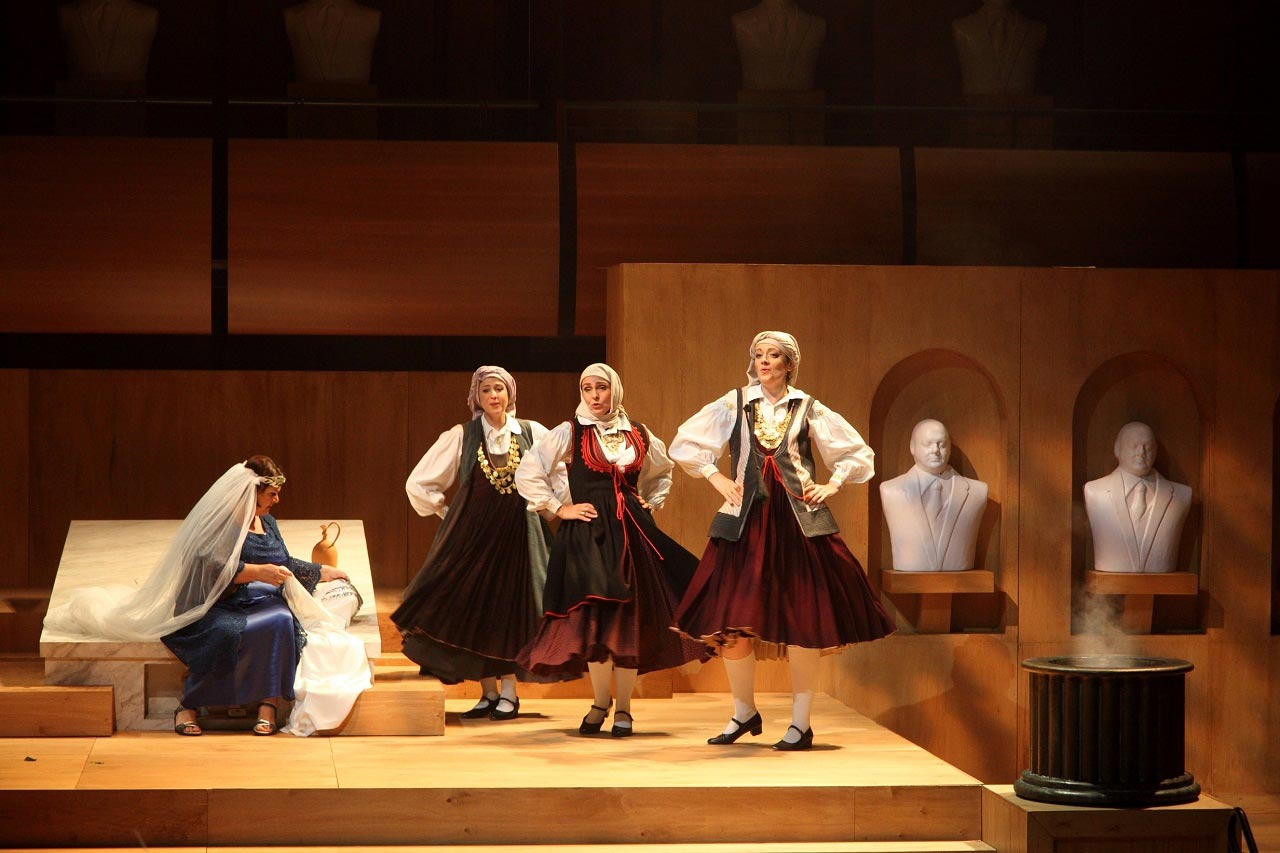 Twilight of the Debts

The Greek National Opera’s Alternative Stage launches its first official season at the Stavros Niarchos Foundation Cultural Center with the premiere of the opera Twilight of the Debts, set to run for twelve performances starting on the 6th of October.

It is a radical adaptation of Richard Wagner’s Twilight of the Gods, transcribed by Kharálampos Goyós, based on the libretto of Dimitris Dimopoulos and directed by Alexandros Efklidis.

The opera tells the story of a betrayed Greek voter, the myth of the debt and the blending of neoclassical fancy with contemporary Greek reality. The creators borrow elements from Wagner’s legend and the fall of Valhalla, homeland of the gods, here substituted with the Holy Rock of the Acropolis, a timeless symbol of the Greek and western civilization.

Greek Brünnhilde - Julia Souglakou, the Greek counterpart of Valkyrie, daughter of the ruler of the gods in Wagner’s opera, offers by her vote the succession ring to her Hero, Sotiris - Dimitris Paksoglou, the Greek counterpart of Siegfried, hoping that he won’t betray her like his predecessors and that he will manage to break the perpetual debt cycle tormenting them.

The original’s motifs, Wagner’s famous “leitmotifs” are replaced by widely known Greek musical themes, such as the National Hymn and the children’s song “Where’s the ring”, producing thus a palimpsest, where the Wagnerian creation engages in an immediate dialogue with the emotive world of the Greek audience.

This 5-hour long work has been cut by two thirds and brought down to chamber format, with 11 singers and an 8-member musical ensemble taking the place of the massive Wagnerian orchestra.

However, beside the reduction of the opera’s initial size, the performance puts forth a version of Wagner adjusted to domestic standards with a new libretto in Greek, turning thus the – either way rich in political reflection – original into an explosive political melodrama raising questions about the contemporary European reality, just as Wagner did in his turbulent era. This different reading of Wagner’s masterpiece is supported by a cast of GNO’s leading actors.

The Twilight of the Debts is the first reworked classic lyric work ever mounted by the GNO’s Alternative Stage -a genre that the Greek National Opera aims to turn into one of the key parts of its programme. It will run in two cycles, for five performances starting on the 6th of October and for seven more starting on the 5th of January.

The Twilight of the Debts is the third reworked opera presented by the creative team of Kharálampos Goyós, Alexandros Efklidis and Dimitris Dimopoulos. Their first two reworked operas "Yasou Aida!" and “AirRossini" met with great success in Athens and Berlin, opening the way to more experimental operatic readings.