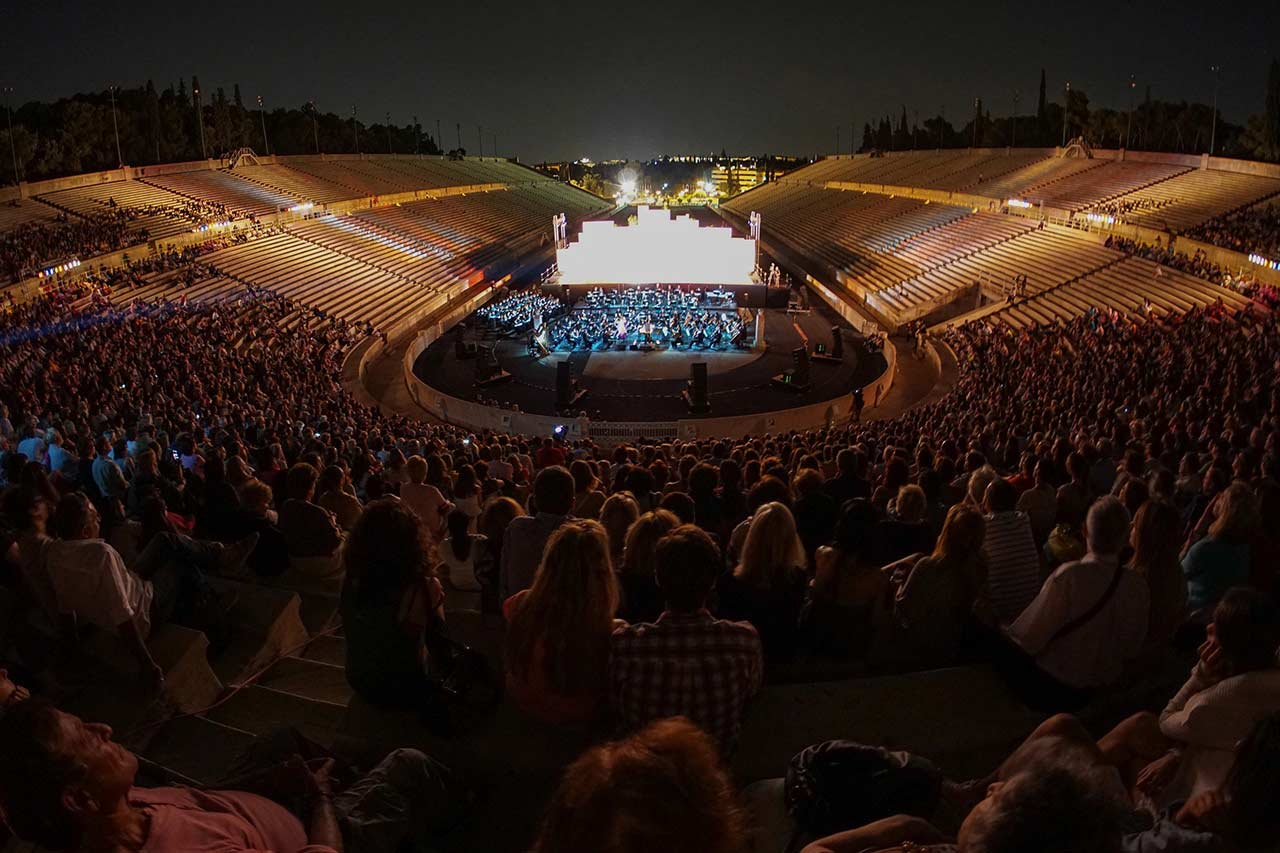 With the participation of the Orchestra, the Chorus, Principal Dancers, Soloists, Coryphées and Corps de ballet of the GNO

A classic milestone of Greek culture, celebrated across the world, Mikis Theodorakis’ Zorba the Greek is presented by the Greek National Opera Ballet in its debut at the Panathenaic Stadium, for one performance only, on Sunday 29 June. A production with a high-calibre aesthetic, it aims to attract both a Greek audience and foreign visitors, with ticket prices kept low for the occasion at between 15 and 25 euros.
Nikos Kazantzakis’ literary hero from The Life and Times of Alexis Zorbas brought to life by the dancers of the GNO Ballet in the iconic Panathenaic Stadium, in the shadow of the Acropolis, through the grand classical choreography of Lorca Massine, Mikis Theodorakis’ monumental score and the imposing vocal skills of Maria Farantouri, conducted by Elias Voudouris. An extravaganza with the GNO Orchestra, Choir and Ballet about the indomitable Greek spirit, a hero who has become a symbol of a very special aspect of Greece, whose unbridled force and idiosyncratic nature is sublimated in the Dionysian music penned by Mikis Theodorakis, which has become synonymous with Greece in the four corners of the Earth.

The hero born from the pen of Nikos Kazantzakis, who inspired director Michael Cacoyannis to make the Oscar-winning film named after him some 50 years ago, lives among us like a native deity, untouched by the passage of time, speaking to us about the power of life, extinguishing joy and anguish through dance.
Celebrated Greek composer Mikis Theodorakis notes: “I am deeply touched that my piece is being performed at such a great venue as the Kallimarmaro. I would like to express my thanks to the Greek National Opera and to its Artistic Director, Mr. Myron Michailidis.”
Choreographer Lorca Massine presented his original version of Zorba the Greek at the Greek National Opera in 1976 using the score that Mikis Theodorakis had penned in 1964 for the film of the same title by Michael Cacoyannis. Ten years later, the choreographer made a selection of extracts of different works of his, which he believed expressed the spirit of Kazantzakis’ Zorba the Greek. This new arrangement was submitted to the Festival of Verona, which suggested that he set the entirety of the material to music. He got it done in Paris after eight months of hard work.
In August 1990, the Greek composer conducted the premiere of his new piece at the Arena di Verona to audience of 18,000 people that exalted the music as well as Massine’s monumental choreography. To date, Zorba the Greek has been performed in more than 30 countries, from Australia all the way to the beach of Ipanema in Rio de Janeiro and an audience of 150,000.
Massine’s choreography is a blend of classical, folk and modern dance, while Theodorakis’ music combines symphonic with traditional Greek folk music, forming a spectacle of incredible force.
The lead roles are performed by the GNO Ballet’s Principal Dancers: Stratos Papanousis (Zorba), Danilo Zeka (John), Maria Kousouni (Marina), Aleksandar Neskov (Manolios) and Stavroula Kambouraki (Madame Hortense).
The GNO Orchestra is conducted by Elias Voudouris. The acclaimed chief conductor of the GNO has conducted Zorba the Greek on several occasions in the past: At the Rome Opera (June 1993), at the Herodes Atticus Theatre with the ERT Symphony Orchestra and Choir in a concert celebrating Mikis Theodorakis’ 70th birthday (September 1995), with the Strasbourg Philharmonic Orchestra (March 1996), with the GNO Orchestra, Choir and Ballet at the Herodes Atticus (July 1998, October 2001 and September 2005), with the Moscow Opera Symphony Orchestra at the Herodes Atticus and in Cyprus (October 2005), and with the Beijing Symphony Orchestra and the China National Opera Choir in Beijing (June 2006).
The songs will be performed by one of Greece’s most renowned vocalists, Maria Farantouri, best known for her interpretations of Mikis Theodorakis’ work.
Manolis Giorgostathis and Aris Koukos are on the bouzouki.
The GNO Choir is conducted by Agathangelos Georgakatos, while the production’s artistic supervision belongs to GNO Ballet Artistic Director, Renato Zanella.
Students from the GNO’s Dance School are also participating in the performance.