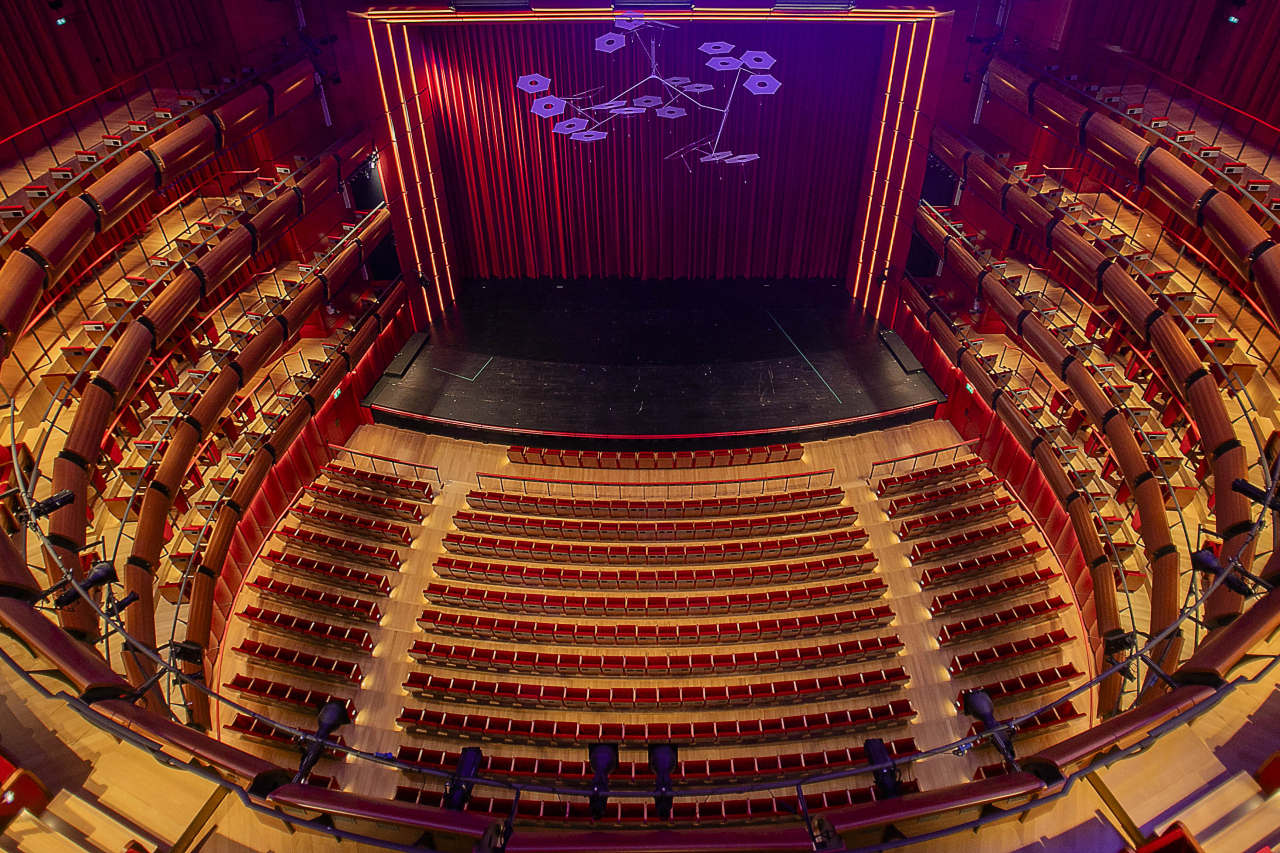 In line with the restrictive measures for the protection of public health against the spread of the coronavirus (COVID-19), it is noted that according to the instructions of the Greek State, GNO’s venues at the SNFCC will operate at a 100% capacity and only for persons who have been fully vaccinated or have recovered from COVID-19 (audience members need to present a respective valid certificate). Children up to 11 years old must provide a negative self-test result declaration, provided that the test has been taken within the last 24h. Children from 12 to 17 years of age need to present a certificate of vaccination or recovery from COVID-19,or a negative COVID-19 (PCR or rapid) test result.

With the kind support of

The Greek National Opera honours Mikis Theodorakis with the presentation of his emblematic work Axion Esti to poetry by Odysseus Elytis, on 29 and 31 October in the Stavros Niarchos Hall at the Stavros Niarchos Foundation Cultural Center. The new performance of the work, with the Orchestra and Chorus of the Greek National Opera, conducted by Stathis Soulis, with George Dalaras and Dimitri Platanias as soloists and Giorgos Gallos as narrator, is the first concert of the three-year tribute cycle to Mikis Theodorakis following his death and will be held as part of the tribute to the bicentennial of the Greek Revolution. This production, part of a tribute to the 2021 bicentennial of the Greek Revolution, is made possible by a grant from the Stavros Niarchos Foundation (SNF) [www.SNF.org].

A performance of Axion Esti by the GNO forces in the context of the tribute to the 200th anniversary of the Greek War of Independence carries with it irresistibly symbolic associations. Axion Esti will be the first performance of the Mikis Theodorakis cycle following the death of this great composer and will be dedicated to his memory. Fruit of that fertile and largely euphoric period of Modern Greek history, the early ’60s, when the trauma of the Greek Civil War was progressively receding in the past, and new collectivities were enthusiastically seeking cultural expression, this paradoxically-named “popular oratorio” by Mikis Theodorakis (after the poet Odysseus Elytis’ magnum opus) was not only a watershed for Greek music and the career of its creator (“an ending that is (should be) also a beginning”, he writes) but, at the same time, a virtually revolutionary gesture of osmosis between the aesthetic and the political, the intelligentsia and the people, art and life.

Written at the behest of Elytis himself in 1960-61, during the period of Theodorakis’ controversial turn to popular music that began with his musical setting of Yannis Ritsos’ Epitaph, Axion Esti was released only in 1964 – the year of the international phenomenon of Zorba the Greek, and also when Theodorakis was elected to parliament with the United Democratic Left, in a seat associated with the murdered activist Grigoris Lambrakis. The delay was due to the composer’s search for the fragile balance required by his daring wager to synthesise folk-like material with the European tradition, as well as to the gradual, patient work of habituating the general audience to symphonic aesthetics through the activity of the Little Orchestra of Athens, founded by Theodorakis in 1962.

The result justified the composer and unexpectedly became his most commercially successful work. This success was, undoubtedly, due also to the symbolic (in addition to the artistic) gravitas of the original performers: the actor Theodoros Dimitrief as the baritone-Cantor; the folk singer Grigoris Bithikotsis; and the actor Manos Katrakis (an icon of the Greek Left) as the Reader. In addition to that, the form of the work, which retains the proportions and stylistic trichotomy of Elytis’ poem while looking back at the structural models of Bach’s Passions and the Orthodox Divine Liturgy, provides a link to a notable body of mid-20th-century European works that combine neoclassical and religious musical references with timely ideological reckonings – such as Michael Tippett’s A Child of Our Time and Benjamin Britten’s exactly contemporary War Requiem. An ark of “the people’s memory” (per Elytis’ poem) but also an artful trace of a particular era, Axion Esti remains a vibrant and provocative work, always open to new and surprising interpretative approaches.

The new performance of the work by the Greek National Opera will be conducted by one of the most up-and-coming conductors of the younger generation, Stathis Soulis. The great George Dalaras, who has been involved in Theodorakis’ work for more than five decades, will perform as the folk singer, leading Greek baritone Dimitri Platanias will perform as the cantor, and distinguished actor Giorgos Gallos will perform as the narrator. With the participation of the GNO Orchestra and Chorus.

George Dalaras met Mikis Theodorakis at the beginning of his career in Paris in 1972, during the dictatorship. The first fruit of their collaboration was the work 18 Lianotragouda tis pikris patridas (18 Little Songs for the Bitter Homeland) to poetry by Yannis Ritsos, which was released in 1974. It was followed by Kokkino triantafyllo (Red Rose), Ekinos itan monos (He Was Alone), and Radar (to poetry by Kostas Tripolitis) in 1981.

He also took part in all the great post-dictatorship concerts that were held in stadiums all over Greece and abroad (Cuba 1981, European tour with Theodorakis “metasymphonic” works 1990). In 1988 he performed Axion Esti conducted by the composer himself in two concerts given at the Odeon of Herodes Atticus to support the initiative for the erection of the Acropolis Museum. This second rendition of the work was released by Minos.

In 1995 George Dalaras celebrated the 70th anniversary of Mikis Theodorakis with two concerts with the Metropole Orchestra at the Odeon of Herodes Atticus. The recording of this concert was released by EMI Classics. In summer 2001 George Dalaras performed works by Mikis Theodorakis with the Osipov State Russian Folk Orchestra in Delphi, at the official event for the 50th anniversary of the UNHCR that was given international media coverage. In 2002 he participated in the opera Lysistrata at Megaron – The Athens Concert Hall, the Thessaloniki Concert Hall and the Ancient Theatre of Epidaurus.

In 2005 he performed popular songs and classic works of Mikis Theodorakis in Greece and Cyprus. In the two concerts held at the Athens Concert Hall as part of a tribute to the composer’s 80th anniversary, he performed Axion Esti to poetry by Odysseus Elytis and for the first time the whole song cycle Romiosyni, on the occasion of the 15th anniversary of poet Yannis Ritsos’ death.

Greek singer, musician, composer, born in Piraeus. Since 1968 he has built important collaborations: Stavros Kougioumtzis, Manos Loizos, Apostolos Kaldaras, Lefteris Papadopoulos, Manos Eleftheriou were the first creators who trusted him with their songs, followed later on by Mikis Theodorakis, Manos Hadjidakis and more. He has also developed many international collaborations with artists such as Al di Meola, Paco de Lucia, Sting, Ian Anderson, Goran Bregović, Emma Shapplin, Dulce Pontes, Eddy Napoli, to mention but a few. Since 1981 he has travelled all over the world and has given more than a thousand concerts at the most prestigious concert venues, with world-class symphonic orchestras and great conductors. In 1983 at the Athens Olympic Stadium, 160,000 spectators attended his two concerts, and in 1994 his collaboration with the Athens Concert Hall began. The performance “… kai me fos kai me thanaton akatapafstos” (“… incessantly, both with light and with death”) directed by Costa-Gavras was a journey through the history of Greek music. To this day he has recorded more than 80 personal albums and has participated in more than 110 as musician, singer or producer. His record sales exceed 15,000,000 and he has received numerous honorary awards.

One of the up-and-coming Greek conductors, he started studying music at the age of four. He continued his studies at the Department of Music Studies of the Ionian University (orchestra conducting under Miltos Logiadis). He has collaborated with numerous ensembles and organisations: Athens Municipality Symphony Orchestra, Orchestra of Ionian University, Contemporary Music Orchestra of Hellenic Broadcasting Corporation, Athens State Orchestra, Greek National Opera, Megaron – The Athens Concert Hall, as well as the Athens Epidaurus Festival. Moreover, he conducted chamber music ensembles at the International Congress
ICMC / SMC (Onassis Stegi), as well as the ARTéfacts ensemble – Ventus ensemble. He has been collaborating with the Greek National Opera since 2019 and has conducted the productions Simon Boccanegra, Don Quixote, 7 Deaths of Maria Callas, as well as My Fair Lady and Into the Woods for the Alternative Stage.