The programme for the 2019/20 season of the Greek National Opera which will include the celebration of its 80th anniversary, marks a new era of dialogue and interaction with the global developments in the art of opera, with the support of the new donation from the Stavros Niarchos Foundation, which reinforces the Greek National Opera’s artistic outreach and communication of its work beyond Greece.

The programme designed by Artistic Director Giorgos Koumendakis gives a new meaning to the concept of outreach through strategic collaborations and co-productions with international partners, invests in new creations through commissions, takes decisive steps toward the expansion of the operatic repertoire, investigates the interaction of lyric theatre with performance and visual arts and brings on stage unique opera, operetta and ballet masterpieces in ambitious productions.

Four world premieres (Pope Joan, Inland, Dance with my own shadow, Yorgos Lanthimos –The Artist on the Composer), one national premiere (The seven deaths of Maria Callas), seven new opera productions (La sonnambula, Don Carlo, Wozzeck, Pope Joan, Inland, Werther, Rigoletto), two new ballet productions (Dance with my own shadow, Don Quixote), three revivals (Swan Lake, Die Fledermaus, The emperor’s nightingale), but also concerts (Tribute to Kostas Paskalis, Three concertos for piano and orchestra, The era of Melissanthi), performance (The seven deaths of Maria Callas), screenings accompanied by live music (The Apaches of Athens, The Artist on the Composer) make up the programme that will be presented at the Stavros Niarchos Hall and the Odeon of Herodes Atticus from fall 2019 to summer 2020.

In the new programme, along with the GNO’s great artistic staff, we will have the chance to enjoy the fruits of our collaboration with celebrated artists, such as, among others, Yorgos Lanthimos, Olivier Py, Anita Rachvelishvili, Marina Abramović, Graham Vick, Dimitris Karantzas, Nikos Karathanos, Katerina Evangelatos, Marco Arturo Marelli, Benoît Jacquot, etc.

The President of the Board of the GNO Mr. Vassilis Karamitsanis took the floor first and made a mention of all the actions taken in the last eight months of the new Board’s mandate, aiming at streamlining the organization’s financial and administrative practices. Among others, he mentioned: “I had the honour, since November 2018, along with a team of four more persons, to be part of the new board of the Greek National Opera. It is a great privilege for me to participate in the Board as a non-artist, among four more celebrated active Greek artists from art disciplines relevant to the subject matter of our theatre.

We tried to support with undivided collaboration and understanding the artistic director as well as the administrative and financial directors, the organization’s work, as it has been shaped and evolves in the last years, in a period of great development for the lyric theatre in our country.

As Board we tried to support a series of actions, which embrace at an organizational level the current state of affairs, especially after the relocation to the SNFCC in 2017”.

The Minister of Culture and Sports Mrs Lina Mendoni praised the work of the Greek National Opera and underlined that: “It is a great pleasure for me, that this is my first appearance in public, since I have assumed my responsibilities.

The last two, valuable years, since its relocation to the impressive premises of the SNFCC, as well as the constant succour of the SNF to the activities and projects of our Greek National Opera, fill us with optimism for the “days of the future, these vivid, warm, little candles”.

The Greek National Opera at the SNFCC has not only found its new house. The SNF President Mr Andreas Dracopoulos spares no effort to support the organization. The great €20.000.000 donation from the SNF for the four-year outreach programme, which makes use of the acquis of previous activities, and attracts youth audiences, truly gives the GNO wings to fly in the international firmament with ambitious and demanding productions. The Greek National Opera gradually conquers the difficult opera audience at a world level.

Your idea of introducing the Greek National Opera to the world by highlighting the characteristics of its identity, which is inextricably linked to Athens –the archaeological sites, its old theatre, its modern-day house, the Odeon of Herodes Atticus–, is exceptional. In this way, the Greek National Opera capitalizes on the possibilities provided to it by its state-of-the-art infrastructure, contemporary artistic creation and Athens cultural heritage, in order to gain surplus value at a global level.

The programme for the next season that we will soon hear from G. Koumendakis and K. Rigos marks the entry into a period of artistic maturity in the history of the organization, and includes international co-productions and strategic co-operations of the GNO with international partners and world-class artists. At the same time, it invests on important Greek creators. The historic past comes to be matched, in a “supernatural” way, as G. Koumendakis says, with the GNO’s ambitious future”.

The GNO Artistic Director Mr Giorgos Koumendakis, after welcoming the new Minister of Culture and Sports Mrs Mendoni, and wishing her every success in her work, he made a thorough presentation of the 2019/20 programme (attached hereby), noting, among others: “The 2019/20 season encapsulates in an almost supernatural way Greek National Opera’s historic past and ambitious future. It is the season in which we will celebrate our organization’s 80th anniversary and at the same time, with youthful impetus and unparalleled passion, we shall spread our wings to reinforce our international presence, that turns into action thanks to the generous €20 million euro donation from the Stavros Niarchos Foundation.

I am very happy with the programme you now have in your hands because this year, more than any other year, we open up to new creations, we introduce to the audience works never presented before by the Greek National Opera, we create ambitious new productions, we engage in a dialogue with cinema and performance art, we present successful productions by leading European opera houses, and we invite renowned artists to collaborate and create with us”.

About the celebration of the GNO’s 80th anniversary, the Artistic Director of the GNO noted:

“It was 5 March 1940 when the efforts of important figures of the time to create a National Opera, at first, as part of the National Theatre at the Ziller building on Αghiou Kοnstantinou street, led by Costis Bastias, were crowned with success and acquired flesh and blood with the first performance of Johann Strauss Jr’s Die Fledermaus. What followed is well known – the organization became independent, it was renamed as Greek National Opera, and was housed until 2017 at the Olympia Theatre on Akadimias street, and from 2017 on in our new venues, here at the Stavros Niarchos Foundation Cultural Center, which is a donation from the Stavros Niarchos Foundation to the Greek State. Exactly on the day of our 80th anniversary, on Thursday 5 March 2020, we will present again the same work, Johann Strauss Jr’s Die Fledermaus, with surprise guests –especially for this occasion– at Prince Orlovsky’s party”.

Regarding the support of the 2019/20 programme by the new donation from the Stavros Niarchos Foundation, he noted: “Six of the most ambitious productions of the 2019/20 season, which also have an international dimension, are supported by the new €20 million euro donation from the Stavros Niarchos Foundation, which was announced at the beginning of 2019 and aims at reinforcing Greek National Opera’s artistic outreach and communication of its work beyond Greece. They include La sonnambula, a production that will be held in collaboration with the Vienna State Opera, Don Carlo directed by the outstanding British director and artistic director of the Birmingham Opera Company Graham Vick, Wozzeck directed by the artistic director of the Festival d’Avignon Olivier Py, Werther, a production in collaboration with the Opéra National de Paris, the great co-production with Munich, Berlin, Florence and Paris on the Seven deaths of Maria Callas by Marina Abramović and The Artist on the Composer with our international director Yorgos Lanthimos. At the same time, at this very moment, more than 10 international co-productions are being finalized for the years to come, the 2021 anniversary programme is being completed and possibilities for exporting and promoting the work of the GNO abroad are being investigated. I would like at this point to express my great gratitude to the Stavros Niarchos Foundation, the President Andreas Dracopoulos and all the executives for their valuable support to our organization in so many and various ways. My joy for having here today Andreas Dracopoulos and all the representatives of the Foundation is really big. The possibilities available to us thanks to this new donation and the new venues at the Stavros Niarchos Foundation Cultural Center, open up new horizons for the Greek National Opera, of which we make full use”.

At the same time, he thanked the Board, artists, staff and collaborators of the GNO, as well as the Media for their cooperation.

The Ballet Director Konstantinos Rigos announced the programme of the GNO Ballet, made a special mention of the new dancers engaged thanks to the new donation from the Stavros Niarchos Foundation and noted: “In a landmark year for the Greek National Opera, I am particularly happy because our ballet will present an ambitious and highly demanding programme. After my first year at the helm of the Ballet, where I feel we have taken big steps forward, this year, we’ll continue with greater confidence and assertiveness”. 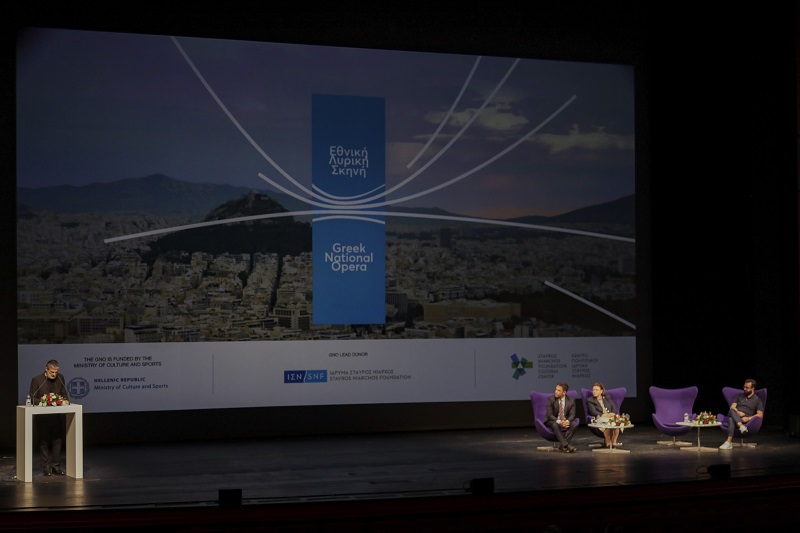 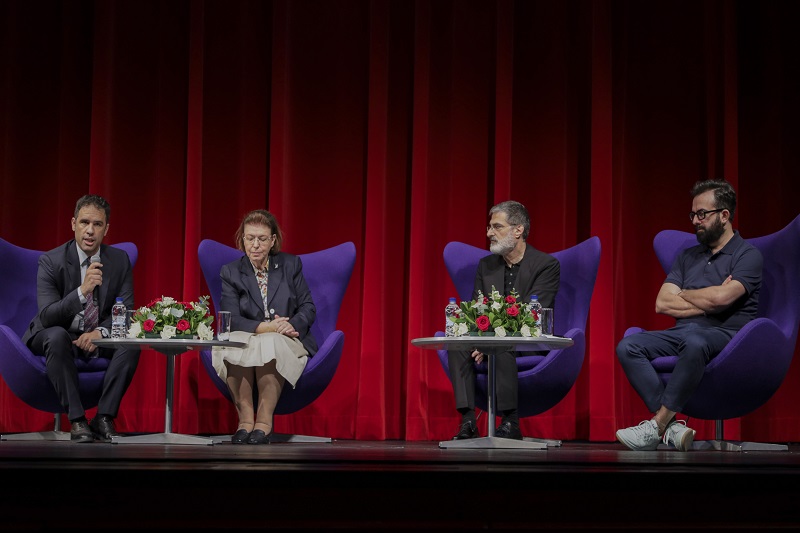