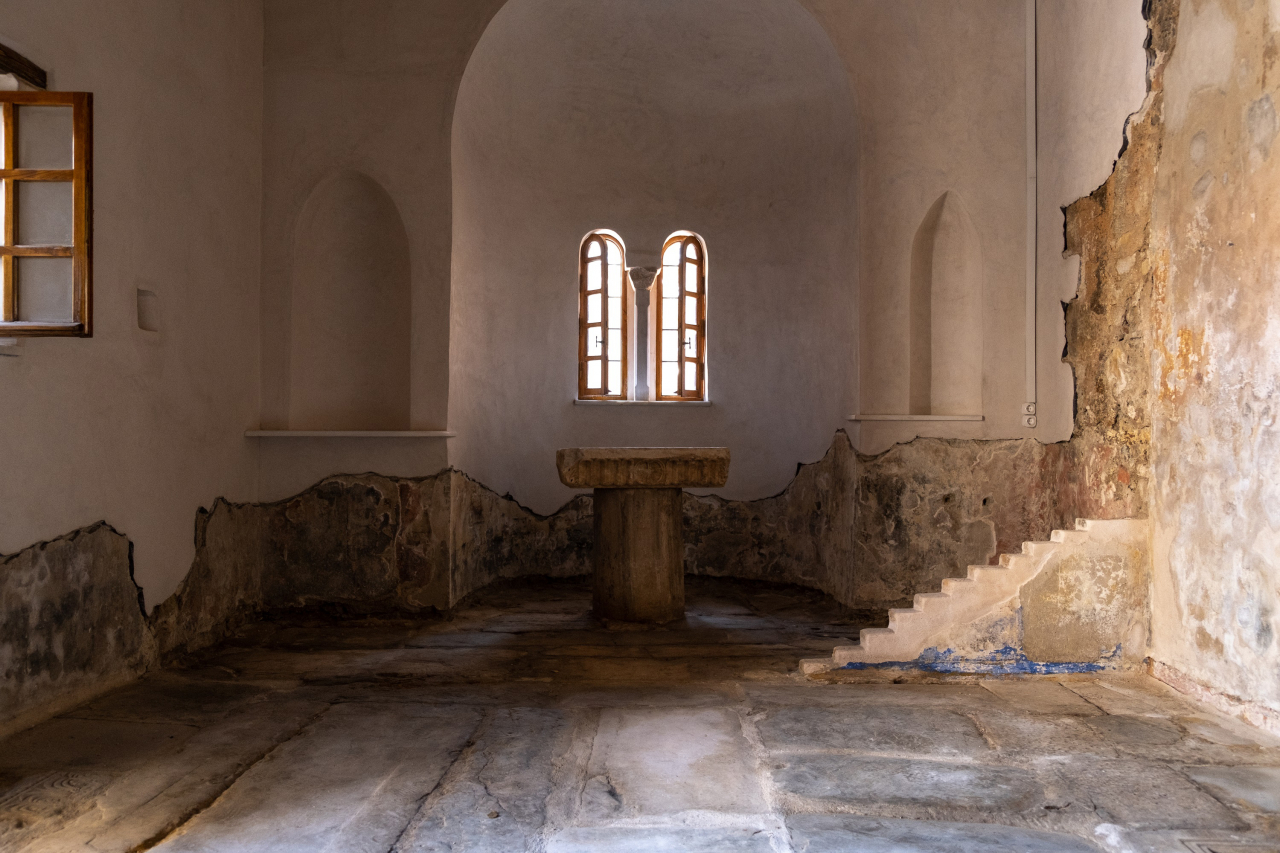 The Liturgy of Temptations is a work about the temptations of the New Testament, hovering at the border between music theatre and some kind of contemporary liturgical music. Its text was created by the composer and includes excerpts from the New Testament, in a mix of ancient and modern Greek, as well as fragments from Alexandros Papadiamantis’ short story The Fallen Dervish and Zacharias Papantoniou’s He Discovered His Soul.

To tempt someone means to test someone. It derives from the root peîra, which means to pass, to cross. So it could be said that, metaphorically speaking, temptation is the act of putting someone to the test.

As the work unfolds it turns into a wandering, a passage, a kind of procession: it begins from “The Courtyard of Miracles” –as the Logothetis mansion’s courtyard used to be called– and ends in the small church of St Elissaios, where the great Greek literary authors Alexandros Papadiamantis and Zacharias Papantoniou used to chant. — S. K.

He was born in Athens. He graduated in physics from the University of Patras and holds a PhD from the National Technical University of Athens. He has a diploma in guitar and has also studied acting. He has taken composition and music theatre classes with Michel Vaan der Aa, Joan La Barbara, Alain Louvier, Michael Denhoff, Tristan Murail, Ivo Medek, Tomáš Ondrůšek, Jeff Beer and Christina Zavalloni, among others. He has also repeatedly attended classical theatre masterclasses by Adolf Sapiro. He has composed works of contemporary classical music and music theatre works. His works have been performed in Greece and abroad. Finally, he himself has participated in music theatre performances. His original compositions have been performed by Alain Louvier, Michael Denhoff, Ivo Medek and Tristan Murail.

Church of St Elissaios (where Alexandros Papadiamantis used to chant)

The little church of St Elissaios at 14 Areos St in Monastiraki, opposite Hadrian’s Library, was first built in the 16th or 17th century. Probably at a later stage, it became part of the mansion that belonged to the known Chomatianos-Logothetis family of Athens; its stair-gate survives to this date in the western part of the temple. At the late 19th century and the early 20th century, this little church –a plain, small-sized, single-nave basilica– was frequented by some of the most prominent men of letters of the time, like Alexandros Papadiamantis and Alexandros Moraitidis, who served as right and left cantors, respectively. In that period it was priest Planas who used to perform the vigils. In 1943 the privately-owned little church was pronounced a historic and listed national monument. It was partially restored in 2004 and again in 2020. The church stands at the courtyard of the Museum of Modern Greek Culture, a sub-agency of the Ministry of Culture and Sports.

The Museum of Modern Greek Culture stands at the heart of the historical centre of Athens, at the block that is surrounded by Areos, Kladou, Vrysakiou and Adrianou streets in the area of Monastiraki. It is the only public museum of the Ministry of Culture and Sports that treats the modern Greek cultural heritage through its material and immaterial records. It was founded in 1918. Throughout its long-standing history it pieced together a rich collection of objects dating from the 18th to the 20th century, created permanent and periodic exhibitions, realised a multitude of educational activities and events, and released publications. Today, at the threshold of its second century of life, it prepares a new permanent exhibition in a building complex, a magical neighbourhood in Monastiraki, at the block that is surrounded by Adrianou, Areos, Kladou and Vrysakiou streets, where the centuries-old history of the city unfolds through a mosaic of remnants of buildings of the 17th and early 20th centuries.