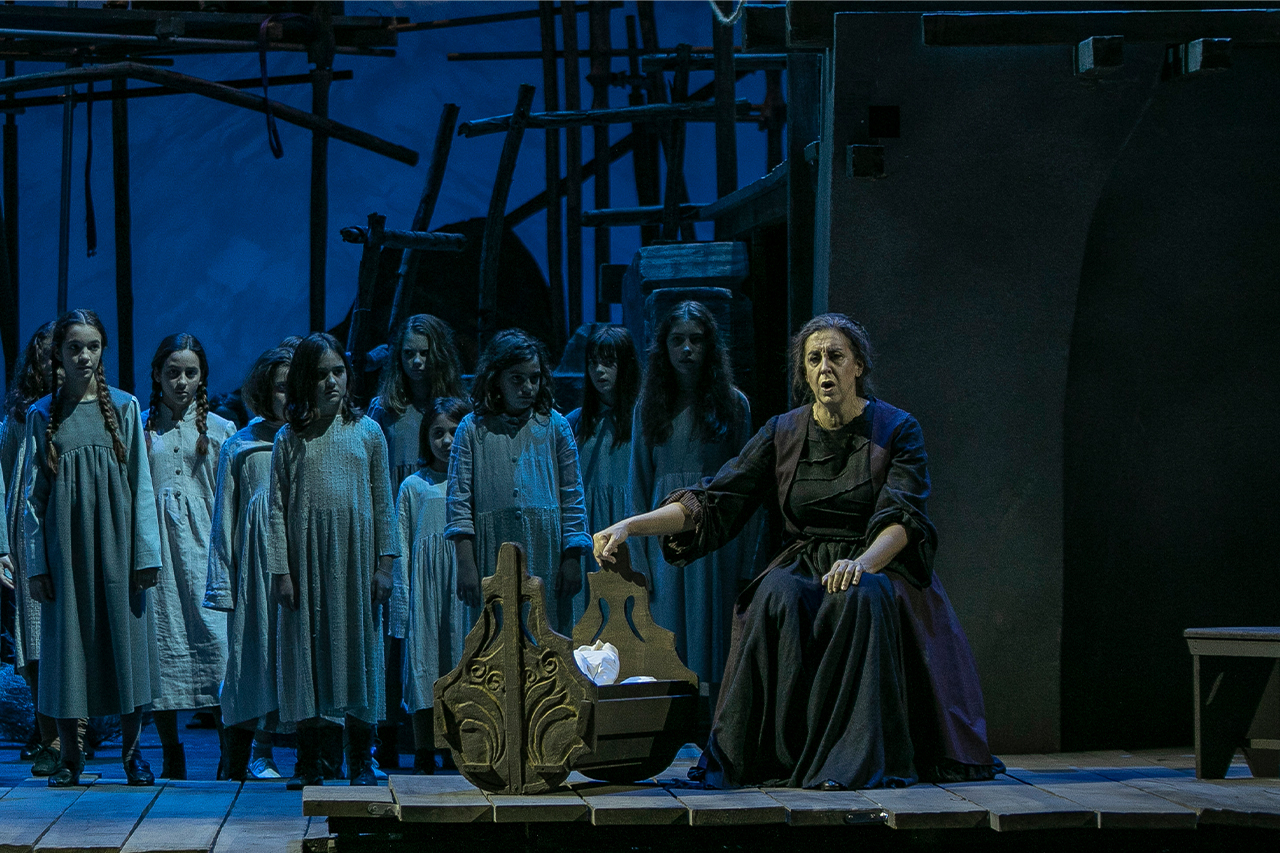 Libretto:
Yannis Svolos, based on Alexandros Papadiamantis’ “social novel” of the same title

With the participation of the GNO Orchestra, Chorus, and Children’s Chorus (as part of its educational mission), alongside a polyphonic ensemble

A Greek National Opera triumph and a landmark work in Greece’s contemporary music landscape returns to the stage. The Murderess –an opera by GNO Artistic Director Giorgos Koumendakis that premiered in 2014 to great artistic and box office success– is coming to the Stavros Niarchos Hall on 3, 5, 28 and 30 December 2021. The libretto by Yannis Svolos is based on the novella of the same title by Alexandros Papadiamantis. Vassilis Christopoulos conducts and Alexandros Efklidis directs, with Mary-Ellen Nesi in the title role. This production is made possible by a grant from the Stavros Niarchos Foundation (SNF) [www.SNF.org] to enhance the Greek National Opera’s artistic outreach.

The 2014 Giorgos Koumendakis work The Murderess creates a startling musical world that marks an evolution in the composer’s distinct personal idiom. His music makes no attempt to bring the historical setting of Papadiamantis’ original work back to life; rather it seeks to bring the inner world of its lead character to life – to capture the psychological portrayal of Frangoyannoù. The opera score traces the Murderess’ every step, at times baring the innermost workings of her mind, at others plunging into the dark and bleak windings of her soul. There are points where the boundless loneliness felt by Frangoyannoù reigns supreme, and others where her scorn breaks through to provide moments of emotional release within the charged plot. “I let the music wander –to express the very psyche of Frangoyannoù freely, in an unforced way– so as to arrive at places that logic alone cannot reach,” notes the composer. He goes on: “I tried to close in on the hidden facets of a psychopathic (?), neurotic (?), forceful (?), domineering (?), undoubtedly complex character fleshed out by the sensational literary sensibilities of the superlative Papadiamantis. In fact, the dividing line between heroine and author very often melts away to leave but a single presence inside of me. Throughout the time I spent writing The Murderess, I tried to set aside all thought of her physical appearance, her age, her facial features, and instead focused my attentions on connecting with that mind which, as Papadiamantis wrote, ‘soared’.”

The Murderess can be considered a work of the Literaturoper genre as it is an opera based directly on a literary work. Yannis Svolos, who created the libretto, has distilled the storyline of The Murderess down to its essentials, while keeping the language of Papadiamantis pristine. Hadoula, known also as Frangoyannoù, is a put-upon middle-aged woman who has spent her entire life serving others – her parents and husband, her children and grandchildren. Now at the end of her tether, having grasped the difficulties and limitations faced by women in poor farming communities like her own, she comes to believe that her mission in life is to unburden the world of its girls. She starts by strangling her new-born granddaughter before going on a murder spree, smothering yet more girls. Fleeing the authorities through the mountains, Frangoyannoù decides to confess her crimes, but drowns in the sea while trying to reach the hermitage of Aghios Sostis (the Holy Saviour).

The directorial approach taken by Alexandros Efklidis seeks to capture the heroine’s psyche in ways that are poetic. The production is a balancing act between the largeness of scale demanded by the presence of multiple choruses and a multitude of characters, and the smallness of scale that is Frangoyannoù’s internal monologue. Alexandros Efklidis himself notes: “This opera by Giorgos Koumendakis focuses on the character of the Murderess and, through the use of music, spotlights something that is very difficult to capture in a straightforward staging of the story: the mental landscape of the heroine – her very psyche. The challenge here was to capture this precise element, to bring Frangoyannoù’s nightmarish world to life on stage. As a result, the opera unfolds as a monodrama, playing out from the highly subjective and disturbed perspective of its protagonist. Ultimately, Giorgos Koumendakis’ The Murderess is a balance between large scale and small, making use of four choral ensembles and a large orchestra to render the subtle, innermost nuances of the heroine’s state of mind, which is absolutely core to the action.”

The sets by Petros Touloudis, and his costumes (designed in collaboration with Ioanna Tsami), generate a dark, furtive, guilt-riven, and terrestrial world, where the “agonies” of Frangoyannoù enter into dialogue with the haunting natural landscapes of Skiathos island. A sense of Greekness, the expansive horizon – both are rendered on stage in a singular way. In Act II, during the hunt for Frangoyannoù, everything is turned on its head: rather than have the Murderess run for the mountains as Papadiamantis describes, the production delivers the exact opposite, with the Murderess standing perfectly still as the natural world spins around her, closes in on her, drowns her. The lighting design is by Vinicio Cheli.

Vassilis Christopoulos –the renowned maestro, and former Artistic Director of the Athens State Orchestra– conducts. Accompanying the Greek National Opera Orchestra are three solo musicians up on stage, as well as four choral ensembles. The male chorus, set at the back of the stage and acting as a basso continuo, focuses on the suffering inherent in human nature, while a large female chorus acts as a mirror of everyday life. A further small vocal ensemble, comprising four lamenting women, also performs choral music inspired by the polyphonic songs of Epirus. The Greek National Opera Children’s Chorus plays the role of a Greek chorus-like group of children who fuel the fire of Frangoyannoù’s criminal inclinations. Agathangelos Georgakatos is chorus master of the GNO Chorus, while Konstantina Pitsiakou is chorus mistress of the GNO Children’s Chorus.