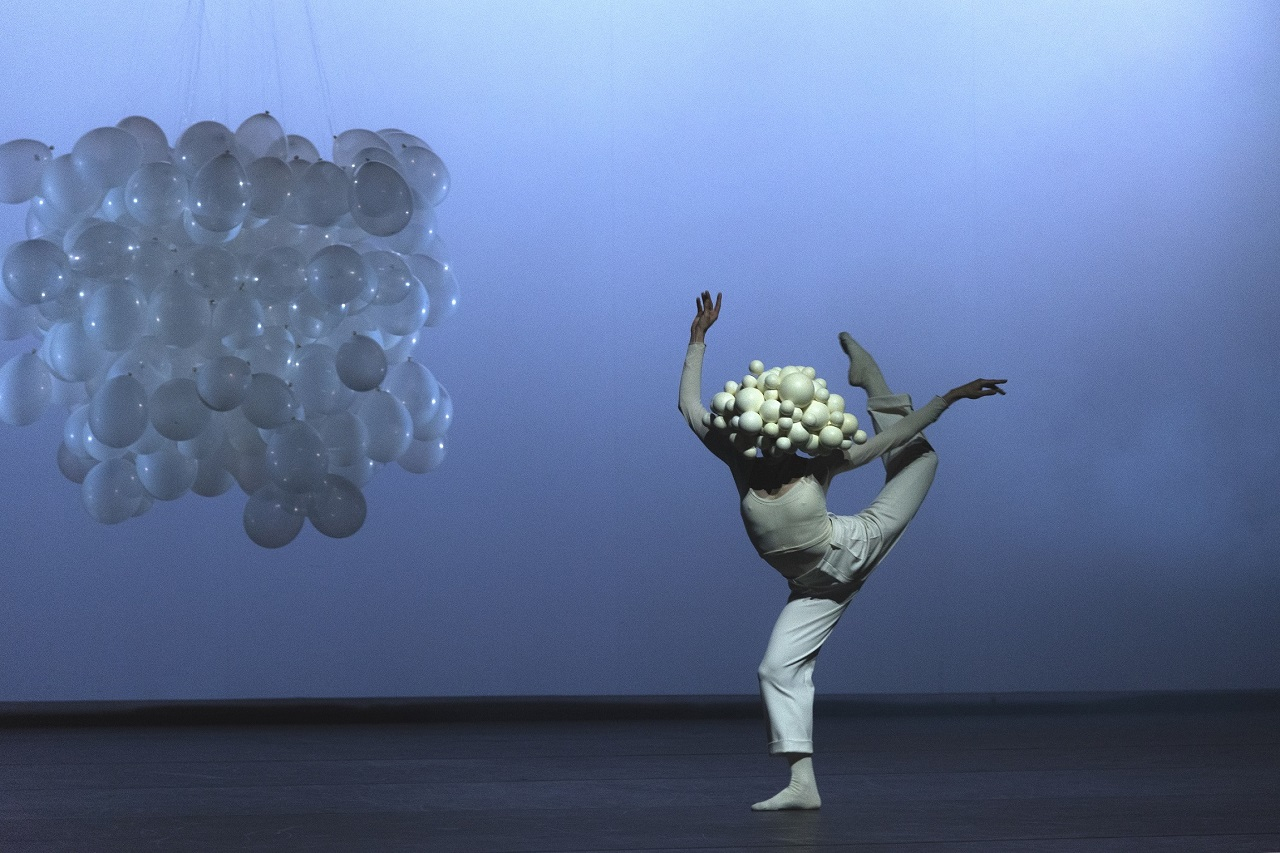 Choreographer and dancer Persa Stamatopoulou created the work Fragments, to music by Apostolis Koutsogiannis, performed by the Oros Ensemble. She notes: “It is a choreographic study on two bodies that coexist bringing out their differences and contrasts. Through an unadorned and abstract aesthetic approach, a microcosm of shifts in space and time emerges, with bodies hovering like comets in the universe and conversing collectively or as autonomous units”.

HARPY is a work choreographed by Michalis Theofanous to music by Danai Belosinof. As Michalis Theofanous notes: “Harpy is a meditation in form of dance about modernity and classic, combining fashion, and the visual arts to propose a game to an inside-out world of that character. A dance performance that inhabits a highly visual environment and approached as a still image that gets alive, followed by the methodology ‘look and feel’ as a project. Influenced in an abstract way by the interesting mythical creatures Harpies, the body transforms itself through different forms: ephemeral shapes that change endlessly as an evolving subject. A body that skips from lyrical and airy, into stiff awkward to observe moves; like the “creature” which sometimes is described as being very beautiful, and sometimes as an ugly creature with a warped body.”

Into the Storm is a work choreographed by Alex Kyriakoulis to music by Stamatis Pasopoulos. It is a challenge and an invitation to dancers to exceed their personal limits and create a dynamic yet powerful mix of bodies and energies. “The choreography is created on 3D levels, in multiple virtual layers, with solos, duets and quickly-formed group shapes, and aims to take viewers on an endless journey of emotions. An invisible line unites and at once separates the dancers, as they carry their energy everywhere. Their momentum can sweep everything away as they come through by creating a cloud of incessant and chaotic movement.”, notes Alex Kyriakoulis.

A few words about Oros Ensemble

Oros Ensemble performs the music of the third and fourth parts of the 5th GNO Online Festival. It consists of Dimitris Karagiannakidis (cello), Apostolis Koutsogiannis (composition, recorder), Eirini Krikoni (violin), Giorgos Madikas (percussion), Antonis Tsachtanis (clarinet), Konstantinos Zigkeridis (accordion). Oros Ensemble was born in the village Vamvakou, Lakonia, in southern Greece, during a residency programme for musicians run by “Vamvakou Revival” as part of the initiative to bring life back to the village. Oros Ensemble operates under the artistic direction of the Greek National Opera and with support from the Stavros Niarchos Foundation (SNF).

Considering original creation to be a vital part of its repertoire, Oros Ensemble presents the first works it had commissioned from young Greek composers, curated by the GNO. These new works featured as part of the 5th GNO Online Festival were prepared in Vamvakou, during the months-long residency of the group in the village. Apostolis Koutsogiannis, Sebastian Diakakis, Petros Leivadas, Stamatis Pasopoulos and Danai Belosinof weave together the first cycle of Greek works performed by the Oros Ensemble.

The Ballet of the Greek National Opera presents twelve new original and imaginative choreographies to works by Greek composers on GNO TV as part of the 5th GNO Online Festival titled Body, remember. The Festival, which is under the artistic direction of Giorgos Koumendakis and curated by Konstantinos Rigos,  will be streamed for free from 26 May to 22 June 2021 and will remain available to the public online for 30 days following its premiere. The Festival is made possible by a grant from the Stavros Niarchos Foundation (SNF) [www.SNF.org] to enhance the Greek National Opera’s artistic outreach

The Director of the Greek National Opera Ballet Konstantinos Rigos notes: “The 5th GNO Online Festival titled Body, remember… is entirely dedicated to contemporary dance, with the GNO Ballet presenting twelve new choreographies to works by Greek composers. The dancers escape from the GNO Main Stage’s black box, although they might sometimes feel like something is holding them back, to discover new spaces, new senses, new steps; to express themselves in a different way in these short stories of dance; to gain thus a new experience and a -literally- new field of action. A cement room, an inspiring ballroom, a grassy yard or a remote beach, a corridor or a closed elevator are only some of the many spaces with which the dancers’ bodies − trapped or liberated− harmonise and which become part of a new narrative. We invite you to enjoy a journey where the body remembers…”.

* The Festival is named after C.P. Cavafys’ poem of the same title.

The Festival will be streamed for free.
To watch the Festival on GNO TV, go to www.nationalopera.gr/GNOTV and follow the very simple and free registration process. GNO TV is made possible by a grant from the Stavros Niarchos Foundation (SNF) [www.SNF.org] to enhance the Greek National Opera’s artistic outreach