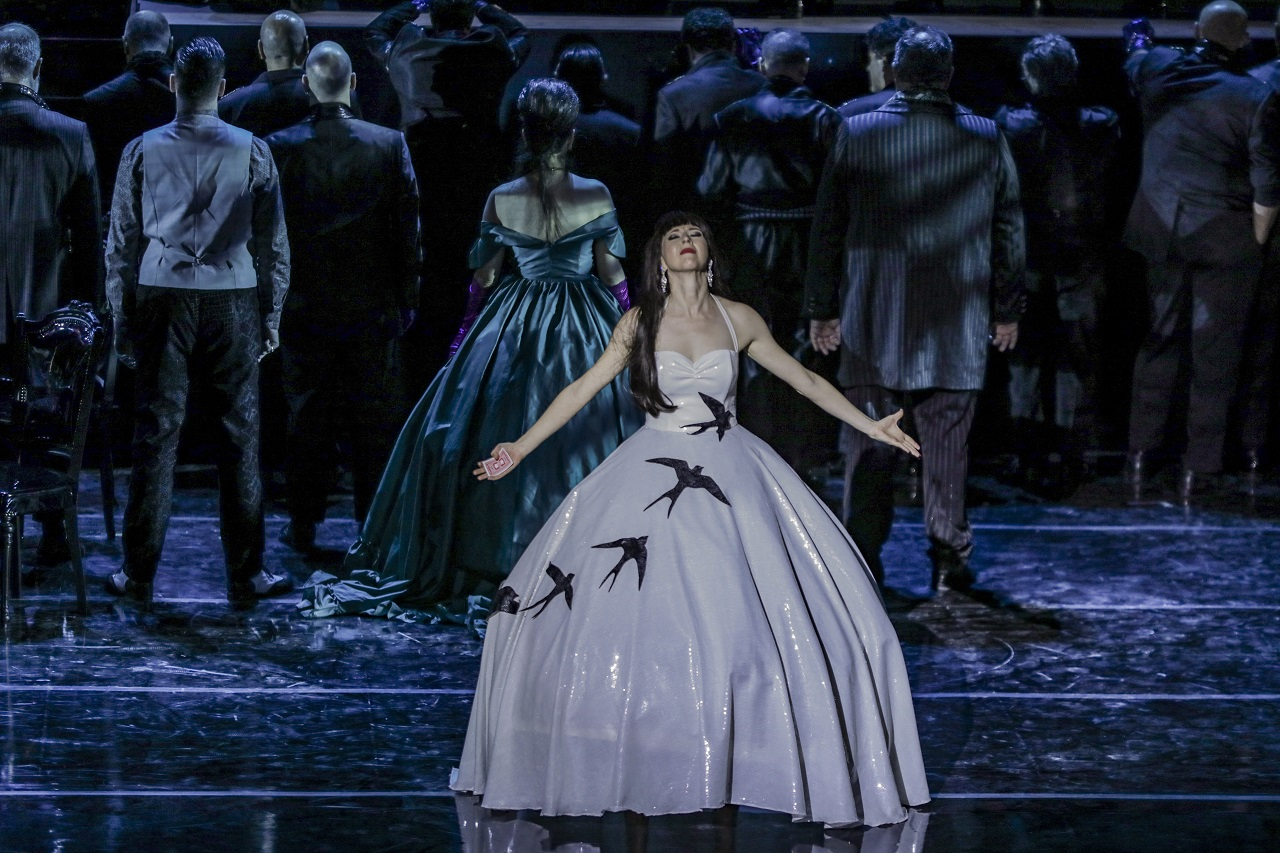 With the GNO Orchestra, Chorus and Ballet

Italian Opera Cycle
A part of the Athens Festival

*It is announced that, due to illeness, the soprano Ekaterina Siurina will not be able to perform the role of Violetta Valéry in the performance of La traviata on Sunday 28 and Wednesday 31 July. The role will be performed by the soprano Maria Mudryak.

The second summer 2019 production of the Greek National Opera is Giuseppe Verdi’s highly popular work La Traviata, which will be presented for the first time at the Odeon of Herodes Atticus. The unlucky love of The Lady with the Camellias for Alfredo Germont, conceived and set to music by Giuseppe Verdi through uniquely powerful melodies indelibly etched in the mind and heart, will be revived in a new production conducted by Lukas Karytinos and directed by Konstantinos Rigos.

La Traviata will signal the operatic debut of director, choreographer and director of the Greek National Opera’s Ballet Konstantinos Rigos, who, apart from his choreographies, has throughout his long-standing career successfully directed works ranging from large-scale theatrical performances, such as Bossa Nova, Titanic, The Red Lanterns and Anemos (at the National Theatre) and Romeo and Juliet, to big musical productions, such as Cabaret, Rocky Horror Show, Erotocritus etc

In line with the spirit of Verdi’s enrapturing music, Rigos marks his stamp on a direction that focuses on the “forced pleasure” which seems to suffocate all the protagonists of the story, as well as the smothering effect of economic transactions that defines everything in the lives of the characters. A psychological profile of Violeta Valery, from the dawn of love to the darkness of death, set in a “minimal” baroque environment.  Twenty years after his emblematic choreography on The Lady with the Camelias at the Kalamata International Dance Festival and the Amore Theatre, Konstantinos Rigos meets again “the famous courtesan of the Parisian society” who was involved with Alexandre Dumas fils and about whom he wrote his play, in its operatic version.

The opera describes the love of a courtesan with the son of a prominent Parisian family. The relationship triggers the reaction of the young man’s family, the couple breaks up, and they meet again a while before the girl dies.

La Traviata’s premiere on 6 March at the Teatro La Fenice in Venice is usually reported as one of the greatest failures in the history of opera. “La Traviata was a fiasco, spare yourself from finding an excuse, it’s just how it is”, wrote Verdi on the very next day, on 7 March 1853, to his publisher Tito Ricordi. One and a half century later, Verdi’s masterpiece is considered as one of the most popular works in the repertory presented in hundreds of performances every year in opera houses the world over and with thousands of spectators watching it ecstatically.

For the new great production of La Traviata, the Greek National Opera has ensured renowned Greek and foreign world-class protagonists.

The great Lisette Oropesa, who interprets the title role in the first cast, is one of the most sought-after sopranos across the world. The last years she has carved out a spectacular trajectory in the world’s leading opera houses, while this year she received two of the most prestigious opera awards. After standing ovations in London, Paris and Madrid, Oropesa is currently making her debut at La Scala, Milan, and after her appearance at the Odeon of Herodes Atticus she will interpret La Traviata at the Arena in Verona, the New York Metropolitan Opera and the Teatro Real in Madrid. Moreover in the 2019/20 season, apart from La Traviata she will also interpret Manon at the Metropolitan Opera, Lucia in Munich and Rosina in Paris.

Alfredo in the first cast will be interpreted by Saimir Pirgu, one of the most internationally acclaimed tenors, who has highly successfully rendered the part, among others, in Paris, Vienna, Verona, London, Berlin, New York, San Francisco, Zurich, Hamburg, Florence.

In the role of Giorgio Germont the top Greek baritone Dimitri Platanias, who this year completes a season full of great successes and triumphant reviews at the operas of San Francisco, Munich, Hamburg, London and Madrid.

In the second cast, La Traviata will be interpreted by by soprano Maria Mudryak. The 25-year old Italian naturalized Kazakh has studied at the Giuseppe Verdi Conservatory in Milan and has already formed an important repertoire of numerous Italian operas. She has successfully performed the role of Violetta Valéry in Florence, Genova and Napoli and, despite her young age, she has already interpreted leading roles of the repertoire, such as Mimi and Musetta in La bohème, Norina in Don Pasquale, Susanna in The Marriage of Figaro, Adina in L'elisir d'amore, Liù in Turandot, among others. In the role of Alfredo Alexey Dolgov, whom the Greek audience has recently applauded in Lucia Di Lammermoor, directed by Katie Mitchel. Dolgov enjoys a great  career at European and American opera houses, such as in Moscow, Berlin, Rome, New York, Washington, Huston, Munich, Barcelona, Madrid, Brussels etc. The role of Giorgio Germont in the second cast will be interpreted by the celebrated Greek baritone Tassis Christoyannis, who has also performed it at the Royal Opera House in London, as well as in Brussels, Dusseldorf, Frankfurt, Geneva, Nantes and the Glyndebourne Festival.

La traviata at a glance

The composer / Giuseppe Verdi, the most celebrated composer of Italian romanticism, was born in the village of Le Roncole in northern Italy in 1813 and died in Milan in 1901. He studied music in the small town of Busseto and then in Milan. His earliest works were influenced by the revolutionary spirit of the times, echoing the struggle of small Italian states to be liberated from the Austrians and unified into one dominant country. Verdi’s involvement with politics elevated the composer to the status of a national symbol (as an acrostic, “Viva V.E.R.D.I.” meant Viva Vittorio Emanuele, Re d’Italia), and in 1861 he was elected a member of the first Italian Parliament. His most significant operas include Nabucco (1842), Ernani (1844), Rigoletto (1851), Il trovatore (1853), La traviata (1853), La forza del destino (1862), Don Carlos (1867, 1884), Aida (1871), Otello (1887) and Falstaff (1893). In terms of aesthetics, Verdi’s music expressed the spirit of a ripe romanticism, while on a political level it expressed his compatriots’ desire to see Italy free and united. He had the good fortune to be loved by an especially broad section of the public and to enjoy a popularity that remains unfaltering to this day. Verdi was the composer who experienced that special moment in the history of music when high art became popular, during the historical, political and social changes of the 19th century.

The opera / La traviata (“The Fallen Woman”) is an opera in three acts to a libretto by Francesco Maria Piave (1810-1876) after the play La Dame aux camelias (1852) by Alexandre Dumas fils (1824-1895). It recounts the story of Marie Duplessis (1824-1847), a famous courtesan of Parisian society, with whom Dumas was well acquainted. La Dame aux camelias was first published as a novel in 1848, only a year after the death of twenty-three-year old Duplessis from tuberculosis. In February 1852 Verdi probably saw in Paris the novel’s adaptation for the stage, again by Dumas. Fascinated, he decided for the first time in his career to address the audience through a contemporary subject, attempting to make social criticism.

Premieres / The opera received its premiere on 6 March 1853 at the renowned Gran Teatro La Fenice, Venice. Verdi later made various alterations to the score, mainly in Act II, and La traviata’s next staging was held on 6 May 1854, this time at the Teatro San Benedetto, Venice. The opera was presented on 29 October 1855 at the Teatro San Giacomo on Corfu, at the time capital of the United States of the Ionian Islands, state and amical protectorate of the United Kingdom until 1864. La traviata reached Athens two years later, on 31 October 1857. The work was first presented by the Greek National Opera on 30 July 1942 at the Open-Air Theatre of Klafthmonos Square, Athens. The cast included Mireille Flery as Violetta, Nikos Glynos as Alfredo and Christophoros Athineos as Giorgio Germont. The performances were conducted by Leonidas Zoras.

Act I / At Violetta Valery’s house in Paris. August, around 1850. During a reception, Vicomte Gastone de Letorieres introduces Violetta, a famous courtesan of Parisian high society, to another admirer of hers, Alfredo Germont. After the young man has made a toast, the guests go on to the ballroom. Feeling unwell, Violetta remains behind; her symptoms suggest that she is consumptive. Alfredo assists her and confesses his deep love for her. When the guests leave, Violetta wonders whether this affectionate young man could free her from her present way of life.

Act II, Scene 1 / A country house near Paris. January, around 1851. Three months have already passed since Violetta and Alfredo set up house together. When he finds out that she has been selling her belongings to finance their life together, he decides to return to Paris in order to settle his affairs. During his absence, his father, Giorgio Germont, secretly visits Violetta. He asks her to leave Alfredo, claiming that his son’s relationship with a courtesan threatens the future prospects of his daughter, who is soon to be married. Violetta is heartbroken but eventually capitulates. When Alfredo returns, she bids him farewell pretending that she is only leaving for a short while. Through a letter she later informs him that she has deserted him. Germont tries to comfort his son, but Alfredo, not knowing the true reasons of Violetta’s actions, swears vengeance.

Scene 2 / Flora Bervoix’s house, Paris. Flora, Violetta’s friend, is holding a reception; her guests are enjoying themselves. Alfredo enters and is soon followed by Violetta, who is escorted by one of her previous admirers, the Baron Douphol. Alfredo starts playing cards and wins large sums. As the rest of the guests retire for dinner, Alfredo and Violetta speak privately. She is afraid for his life and begs him to leave. In order to convince him she claims that she now loves the Baron. Alfredo is furious and insults her in front of all the guests. He scornfully throws his winnings at her feet as payment for her “services”. His father reproaches him for his offensive behaviour, while Douphol challenges him to a duel.

Act III / Violetta’s bedroom, February. Violetta has only a few more hours to live. She rereads a letter from Germont, telling her that Alfredo had fled abroad after wounding the Baron at the duel but was now hurrying back to ask for her forgiveness, having learned of her sacrifice. Outside, a group of revellers can be heard celebrating carnival. Alfredo soon arrives and the two lovers are happily reunited. They dream about leaving Paris together. However, when Violetta stands up to get dressed, she collapses. The doctor rushes to her bedside, but it is too late. Germont also arrives and begs her to forgive him. Violetta gives Alfredo a locket with her portrait and wishes him to marry a woman worthy of himself. Then she dies in Alfredo’s arms.