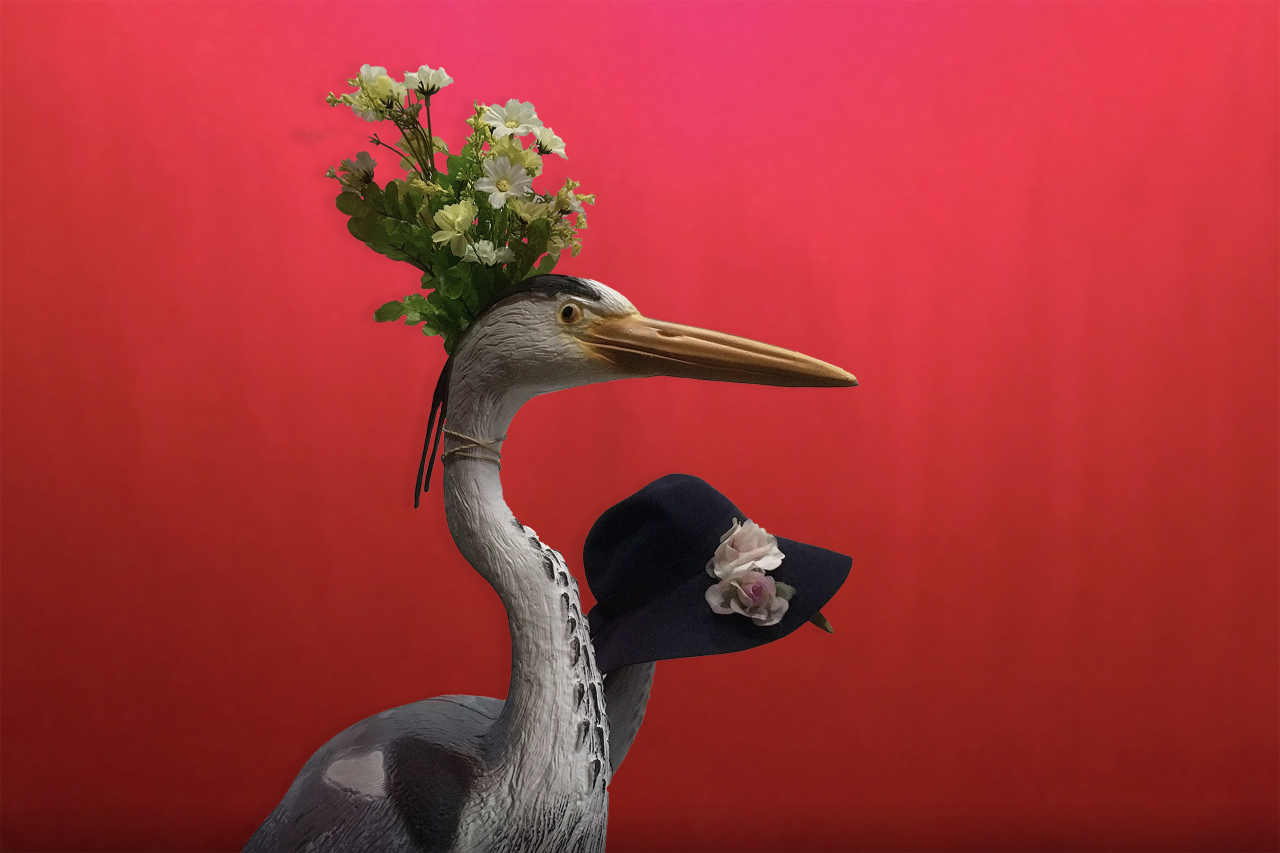 In line with the restrictive measures for the protection of public health against the spread of the coronavirus (COVID-19), it is noted that according to the instructions of the Greek State, GNO’s venues at the SNFCC will operate at a 100% capacity and only for persons who have been fully vaccinated or have recovered from COVID-19 (audience members need to present a respective valid certificate). Children up to 11 years old must provide a negative self-test result declaration, provided that the test has been taken within the last 24h. Children from 12 to 17 years of age need to present a certificate of vaccination or recovery from COVID-19, or a negative COVID-19 (PCR or rapid) test result.

Based on the musical work by Marc Monnet, Arno Fabre’s irresistible phantasmagoria with the childlike and improbable title Bibilolo arrives at the GNO Alternative Stage at SNFCC on 5, 6, 7 November 2021. It is an “opera” without singers and a “ballet” without dancers – but with plastic animals, electric trains, remote-controlled bulldozers, exterminator robots, smoke machines, pulleys, electric motors, cables and long cast shadows. A dreamlike poem, offering a seductively ludic, demystified introduction to the kaleidoscopic soundscape of contemporary music.

Bibilolo, a co-production of the GNO Alternative Stage with C15D, Printemps des Arts de Monte-Carlo (Monaco), GRAME – Centre national de création musicale (France), Cerise Music, is a sui generis work for all audiences who wish to let themselves enter an imaginary landscape without frontiers, graceful, euphoric and even tragic at the same time!

Bibilolo; it’s as if somebody had overturned the toy boxes in the middle of the stage, hung Aunt Germaine's chandelier between the grandfather clock and the piano, lit candles in the decorated cave and dismantled the boat to invite the storm ... An acidic, poetic and dreamlike show, resolutely atypical, halfway between contemporary opera, machinic performance and object theatre.

Despite its subtitle, this is not really an opera, there is no libretto, no story, no singers. It is not a ballet either, there are no dancers, despite a millimetric choreography of manipulator-machinists performed on music. It’s not a concert, yet there are three virtuoso pianists playing contemporary music. It is not circus, although the musical compositions are named after clowns and it looks like a “number” show. It's not really a puppet show, although there is at least one, maybe two, and lots of threads. It's not a kid's room, but it might look like it. It’s not a dream, but it’s the closest thing to it.

The composer Marc Monnet, who wrote the original version of Bibilolo based on a collection of more than 400 “old-fashioned” electronic sounds created with a Yamaha TG77 synthesizer from the ’90s, writes about his award-winning work: “This piece, I made it with great freedom, I really wanted to have fun, that is to say not to forbid myself anything…”. It is a dense, inexhaustible and chimerical composition, whose sounds evoke an overpopulated world of feverish, incessant activity where humour stands next to terror, like in a painting by Hieronymus Bosch.

Well-known for his sonic installations, the artist Arno Fabre signs here his first stage direction with an unclassifiable spectacle. Arno Fabre imagined a dreamlike and absurd set, a kind of huge child’s bedroom expedient to free-associative transformations, exhilarating as well as nightmarish; a space where, in his own words, “stuffed animals are being cut up, dolls made up and combed (when not tortured and dissected), fans play volleyball, Meccano toys are splendid birds and ‘Duracell’ bunnies reach the end of the world and jump collectively to their death, while still impassively beating their little snare drums”…

He might have been born in 1928, 1943, 1947 and in 1949. An atypical and nonconformist composer, Marc Monnet reveals himself only through his works. His music is marked by theatricality and chaos. Unpredictable and inventive, austere or exuberant, tragic or ironic, it generates singular pieces, imbued with poetry and humour, just like their titles. Very precise in his writing, the composer doesn’t hesitate to mistreat the audience in order to break its aural habits. Since 2003, he has been the director of the Printemps des Arts de Monte-Carlo festival in Monaco.

Arno Fabre could have been a cowboy stuntman for films, an ornithologist in Antarctica, a mountaineer trying to climb Annapurna, a stonemason in the 11th century, an apprentice anthropologist in the Amazon or a hunter-gatherer in the Neolithic age. In the end, he drove tractors, rode a bicycle, dismantled the piano, studied at the Louis Lumière and at Le Fresnoy. Nowadays, he builds his house, still rides a bicycle and produces works that he exhibits around the world, be they complex sonic installations, landscape photos or simple texts written on the wall.

Born by two unbridled adventurers in an ochre-coloured land, she firmly demanded to become an astronaut. Through the rubber-band effect (Paris-VIII, Claude Buchvald, Claude Merlin) and after passing through the post-Soviet centrifuge (Valery Volkhovsky’s Voronej Puppet Theatre), she ended up sailing. One of her passions is to turn teapots into rockets. Sometimes she dreams of becoming a crane operator and she sings.

Born in Senegal at the age of two, in 1972. He spent his childhood in Nigeria, among the trees and cargo unloadings of construction sites. After his return in France, he met the typographer Pierre Dumas (a student of Frutiger and Widmer), who revealed to him the international style of Swiss graphic arts, with its rigorous and unadorned geometric compositions. Infused with a blend of African philosophy and Swiss precision, he now divides his time between graphic design, pruning trees, set design for films and active idleness…

Hailing from and having been “rejected” by the rigid world of digital electronics, as a system developer and reverse engineering nut, Frédéric Blin left France in 1995 and lived for a year in Taiwan, where he began to create soundtracks and videos for live shows. Since then, he no longer can stop experimenting at random with journeys, meetings and collaborations, always inspired by hijacking the use of sonic and video objects as raw material for shows.

A specialist in new technologies, he is interested in projects connecting interactivity to live spectacle and contemporary art. He has closely collaborated with composers (Berio, Stockhausen, Dusapin…), for whom he develops electroacoustic and computing devices. He is the project manager of the IanniX association, where he develops spatial music notation applications.

When he is not in his kitchen or garden, tending rare vegetables, he is an authentic Swiss pocket knife of live performances. He works both in the shadows, as composer, sound designer, video designer, lighting designer or musical programmer, as well as in full light, in the street or on stage, where he becomes actor, musician, clown, singer, juggler, and even Oriental percussionist… When he returns home, he always goes back to his kitchen garden and his dreams of becoming an award-winning chef.

She grew up in a garden in Nice, among chickens, cats and horses, under the sound of her mother’s organ and its pipes, transformed into sculptures by her father. Her love for music, and especially for the piano, led her to the National Conservatory of Music and Dance in Lyon, to play in diverse venues and to perform in the humorous musical show The Piano Match (Le Match de piano) with the Pianotokés troupe. Nowadays she renovates her house, cultivates her garden, crosses the bridle paths, teaches at the Regional Conservatory of Nice and participates in various musical projects both as a soloist and an ensemble member.

Diverted from his native milieu by Beethoven and Messiaen, he left Vendée at the age of 14 to learn the art of classical piano alongside various teachers. A few years later, he obtained his diploma unanimously and with honours from the jury from the Conservatoire national supérieur de musique et de danse de Lyon. Now an accompanist charged with diplomas and postgraduate degrees at the Regional Conservatory of Nice, he divides his time between arranging songs, composition of film music (for TV stations Arte, France2…), ornithology and football.

He came to music through listening over and over to both Il barbiere di Siviglia and Freddie Mercury, Brahms and Manos Hadjidakis. This probably explains his attraction to, and his ability to play, a very wide repertoire ranging from Beethoven to Crumb, composers to whom his two recent albums (released in 2018) are dedicated. A student of Jacques Rouvier and Marie-Françoise Bucquet, he was the first recipient of a doctorate from the National Conservatory of Music and Dance in Paris. Nowadays he teaches at the Regional Conservatory of Nice, while leading a very active concert life.