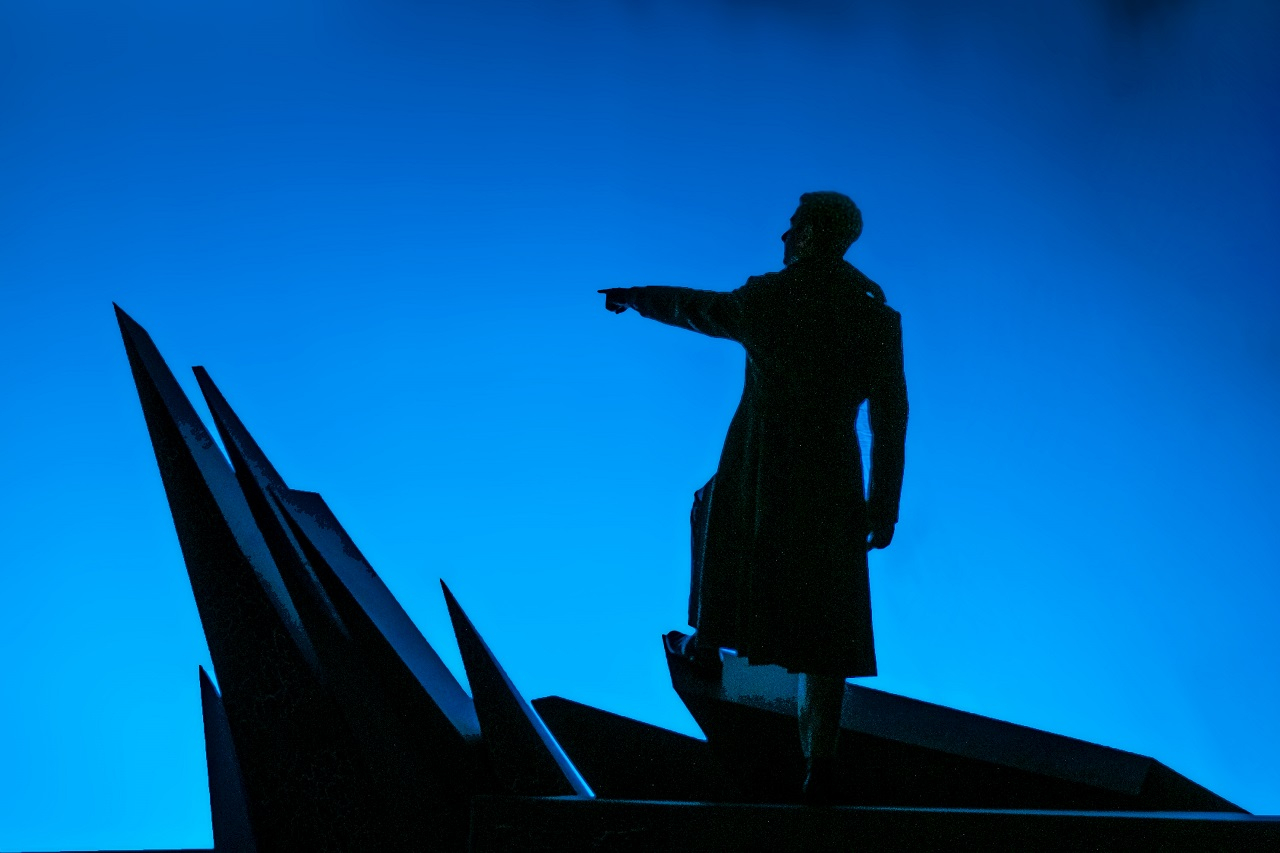 With Timos Sirlantzis as Ioannis Capodistrias

Capodistrias: Monodrama of a secret life

The Greek National Opera Alternative Stage kicks off the 2021/22 season with an ambitious commemorative production at the SNFCC: the new, original music theatre work Capodistrias: Monodrama of a Secret Life by Calliope Tsoupaki. The production , conducted by Nicolas Vassiliou and directed by Themelis Glynatsis, will be presented on 1, 2 & 3 October 2021.

The production is made possible by a grant from the Stavros Niarchos Foundation (SNF) [ www.SNF.org ] to enhance the Greek National Opera's artistic outreach.

The unrequited love between the first governor of the modern Greek State, Ioannis Capodistrias, and Roxandra Sturdza, the lady-in-waiting of the Empress of Russia, serves as subject to the new monodrama by Calliope Tsoupaki, an important Greek-Dutch composer recently awarded the title of Composer Laureate (Componist des Vaderlands), the highest compositional distinction in the Netherlands.

In one of the most romantic episodes of the Greek struggle for independence, Capodistrias and Sturdza (the former a promising politician and diplomat, the latter an educated noblewoman, offspring of a rich Greek Moldavian family) met at the Russian imperial court in 1809 and shared a longstanding, deeply spiritual bond; nevertheless, their love was unconsummated due to their class difference and Capodistrias' self-sacrificing commitment to the Greek cause. Their relationship blossomed around music: apart from their common political activism concerning the Philomuse Society of Vienna (a notable nexus of philhellenic activity at the time), Sturdza is reputed to have played the piano to Capodistrias during their more private moments...

Based on their extensive correspondence as well as on Sturdza's memoirs, the composer renders their moving story in non-narrative terms and sensitively "stages" a compassionate immersion in the shared interiority of two people who lived separately - but are brought together retroactively on stage, thanks to the empathetic power of Tsoupaki's music, full of sensuality and repressed passion.

Calliope Tsoupaki’s work Capodistrias, monodrama of a secret life is inspired by the unrequited love between Count Ioannis Capodistrias (first Governor of the Greek state, 1828–1831) and the Greek Roxandra Sturdza, first lady-in-waiting of the Empress Elizabeth of Russia. The work, based on fragments from their correspondence, attempts to musically “narrate” the secret, inner life of the Governor, his hardships, loneliness and melancholy amid his incessant activity as Foreign Minister of Tsar Alexander I. Their secret courtship began during Capodistrias’ stay in Russia (1809–1811) and developed by means of their correspondence during the following difficult years, Europe’s most turbulent era: the wake of the Napoleonic Wars and the Congress of Vienna (1815), where Capodistrias faced the mighty Chancellor of Austria and enemy of all liberation movements, Prince Metternich, and undertook to unite fractured Switzerland and provide it with a constitution. Concurrently, he managed to avert the financial collapse and partitioning of defeated France. But around that time, just when the successful diplomat was about to ask Roxandra’s hand in marriage, the Empress’ pettiness and personal jealousy on account of the special favour Roxandra held with Tsar Alexander would force the maid into an ultimately failed marriage with Elizabeth’s cousin, Count Edling, in order to drive her away from the imperial court.

After its sad demise, Capodistrias’ and Sturdza’s secret romance would necessarily be limited to a warm friendship. Roxandra would watch closely Capodistrias’ ascent as Governor of Greece: his superhuman attempt to “reconstruct the big wreck”, Greece emerging from 400 years of Ottoman servitude, until his gruesome murder on 27 September 1831. A fateful day for her as well as for the whole of Hellenism…

Calliope Tsoupaki’s work takes off from the couple’s relationship to music, especially their contemporary Beethoven. By playing the piano to each other, they shared all they never got to share in reality…

She was born in Piraeus, Greece, and lives in the Netherlands. Studied piano and music theory at the Hellenic Conservatory of Music and Arts, Athens, and took composition lessons from Yannis Ioannidis. She continued her studies with Louis Andriessen at the Royal Conservatoire in The Hague. To date, her oeuvre consists of more than 100 works for various instrumentations, from solo to orchestral works, dance, theatre, opera and multimedia projects. In her compositions, she uses elements of early and contemporary music as well as the music of Greece and the Middle East. Combining these aspects, she skillfully creates a completely personal style. Her music has been performed at contemporary music festivals and in major concert halls worldwide, and is also available on CD. She lives and works in Amsterdam and teaches composition at the Royal Conservatoire in The Hague. From November 2018 to November 2021, she was awarded the title of Composer Laureate (Componist des Vaderlands), the highest compositional distinction in the Netherlands. On 16 July 2021, she was awarded the most important composition award in the Netherlands, the Matthijs Vermeulen Prize, for the composition of Thin Air.

Pianist, conductor and composer, born in Athens. He studied piano and music theory in Athens and New York, as well as conducting at the Royal Scottish Academy of Music and Drama (RSAMD) (Athens Academy scholarship). He taught music in schools; piano and choral conducting at the National Conservatory of Athens. Director of the Μanolis Kalomiris Children’s Choir (1992-2000), he has collaborated, among others, with the Greek National Opera, the Athens Festival, the Athens Concert Hall. Since 1994, as a répétiteur, he has participated in the musical preparation of more than 60 GNO productions. He has been GNO Chorus master (2005-2011), head of the GNO Opera Studio (2012-2015) and conductor of the Contemporary Opera since 2010, with plenty of Greek premieres in his career. Music consultant of the Athens Festival (2017/18). He has conducted, among others, the GNO Orchestra, the Athens State Orchestra, the Hellenic Broadcasting Corporation Orchestra, the Athens Municipality Symphony Orchestra.

Born in Athens. He studied comparative literature, ancient theatre and theatre in the UK. In 2004, he completed his practice-based PhD at the University of London. He directed works by Heiner Müller, Stéphane Mallarmé, Sophocles, Bernard-Marie Koltès, Claudine Galea, etc. In 2014, he directed the play Y los peces salieron a combatir contra los hombres by Angélica Liddell (Athens Festival) and the opera Cendrillon by Pauline Viardot. In 2015, he directed Romanticism (Onassis Stegi) and Bérénice by Racine (Athens Festival). In the same year, he directed Schubert’s Winterreise (Greek Art Theatre Karolos Koun, Athens), and Salome by Oscar Wilde (Kykladon Street Theatre). In 2016, he directed Georg Friedrich Handel’s Alcina and Giorgos Koumendakis’ 57 – a passion play, and, in 2018, the opera Weisse Rose at the GNO, where he was appointed Vice Chair of the Board until 2020. In February 2020 he presented the musical work Splendidissima Gemma: Recomposing Hildegard (Athens Concert Hall), and in December 2020 his production of Arnold Schönberg’s Verklärte Nacht (GNO) was presented online. In August 2021 he directed the first act of Richard Wagner’s Die Walküre (Megalopolis Ancient Theatre).

Born in Agrinio, Greece, where she finished her general education. She studied Philology at the School of Philosophy of the National and Kapodistrian University of Athens, while at the same time she attended classical voice classes at the Athens Conservatoire. At the Faculty of Philosophy of the University of Athens, she also wrote her doctoral dissertation (Comparative Philology), in which she mainly researched the influence of ancient Greek drama and Platonic philosophy on the theatrical work of Angelos Sikelianos. She lives in Athens and works in secondary education. Her studies, essays and articles on Greek literature (poetry and prose) have been published in conference proceedings, literary magazines and newspapers as well as on the internet. Her book The Masks of Dionysus. Angelos Sikelianos’ Thymele and ancient drama (2014) has been published by Grigoris Publications, Athens.

Born in Thessaloniki, Greece. He studied classical singing at the Conservatorium of music in Drama, Greece, under Charikleia Glavopoulou, as well as violin and piano. He attended regular masterclasses with Aris Christofellis. Ηe received the Alexander S. Onassis scholarship and was accepted to the Master in Opera programme of the University of Music and Performing Arts Stuttgart in the class of Teru Yoshihara, which he completed in 2018. He participated in various opera productions. Among others he sang the role of Calchas (La belle Heléne), The Officer (In the Penal Colony, Onassis Stegi – Armonia Atenea), as well as Don Alfonso (Così fan tutte, Daegu Opera, South Korea), Papageno (Die Zauberflöte, Komische Oper Berlin – Greek National Opera), Colline (La bohème) as well as the roles of Sparafucile (Rigoletto), Frank Maurrant (Street Scene) and Mamma Agata (Viva la mamma) in Stuttgart. Since September 2018 he has been a member of the soloist ensemble of the Gärtnerplatztheater Munich where he has so far sung the roles of Don Basilio (Il barbiere di Siviglia), Monterone (Rigoletto), Schaunard (La bohème), Masetto (Don Giovanni), Cold Genius (King Arthur) and Nourabad (Les Pêcheurs de perles) among others.

Born in Athens in 1990. She is a graduate of the Greek National Opera Professional Dance School and Nellie Karra’s Arhi Drama School. She completed two-year Theatre and Drama programme at the Porta Theatre Studio with Peggy Stefanidou. With her group (Dimitra Kolokytha, Katerina Kaloumenou, Mariza Theofylactopoulou), under Nellie Karra’s direction, they produced the plays Dom Juan by Molière and Waiting for Godot by Samuel Beckett (Skrow Theatre). In the theatre, she has collaborated with directors such as Maritina Passari, Themelis Glynatsis, Eleni Parginou, Pinelopi Flouri, Efthalia Papakosta and Mary Maragoudaki. She took part in children’s theatre productions with Dimitris Pleionis and the TOPI theatre company. As a dancer, she took part in the GNO productions The Nutcracker, Les Contes d’Hoffmann, Raymonda, The Sleeping Beauty, Romeo and Juliet, Eugene Onegin. She played the leading part in Maritina Passari’s short film What Time Will You Be Back?, awarded at the Drama International Short Film Festival. She has worked in education as a teacher of theatre games and music and movement classes.