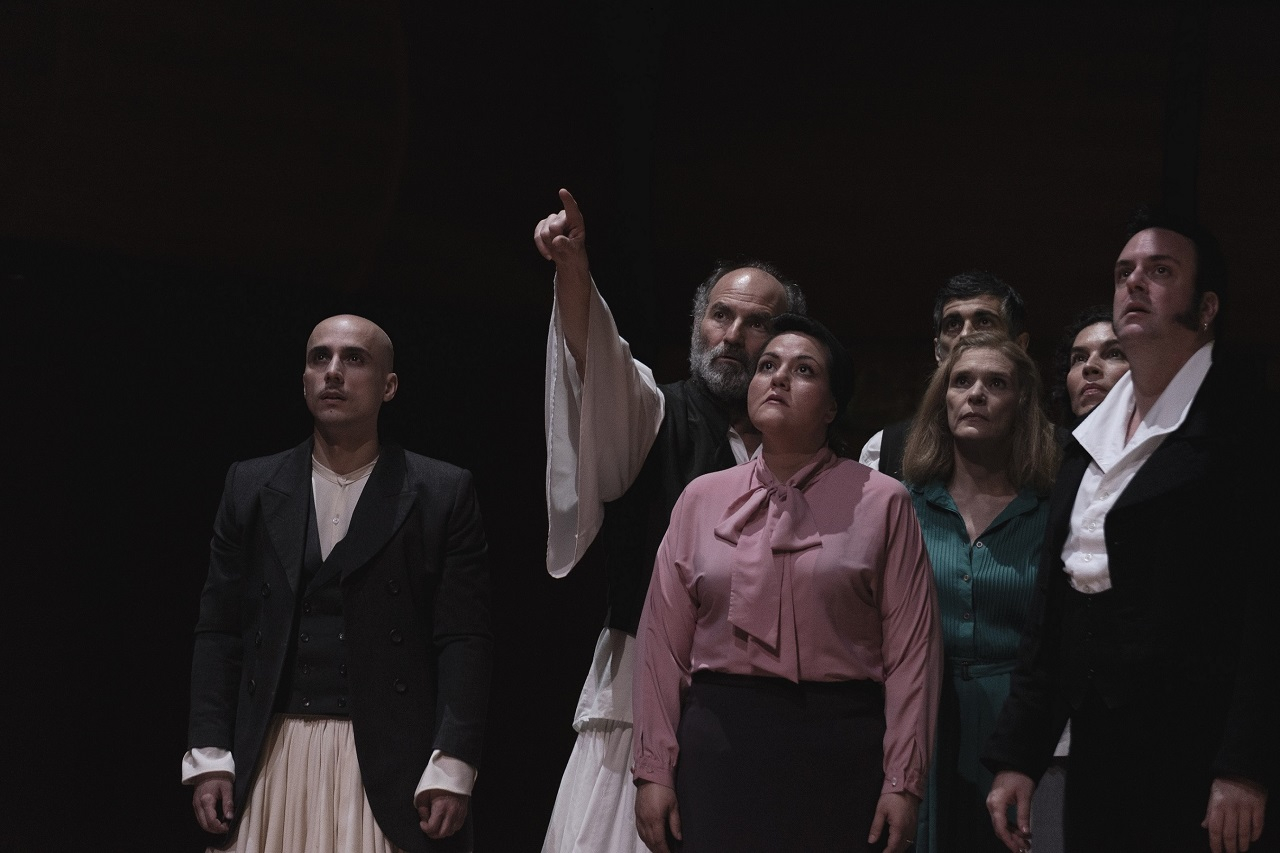 In line with the restrictive measures for the protection of public health against the spread of the coronavirus (COVID-19), it is noted that according to the instructions of the Greek State, GNO’s venues at the SNFCC will operate at a 100% capacity and only for persons who have been fully vaccinated or have recovered from COVID-19 (audience members need to present a respective valid certificate). Children up to 11 years old must provide a negative self-test result declaration, provided that the test has been taken within the last 24h. Children from 12 to 17 years of age need to present a certificate of vaccination or recovery from COVID-19.

The new production directed by Michail Marmarinos and Akillas Karazisis
Kolokotronis Contemplating the Future
Women Preparing for the Revolution
and I’ll Be Thinking of Something
is coming to GNO Alternative Stage on 9, 10, 14, 15, 16 October 2021. The production, part of the 2021 bicentennial of the Greek Revolution, is commissioned by the GNO Alternative Stage and involves a high-profile artistic team led by directors / performers Michail Marmarinos and Akillas Karazisis as well as noted composer Antonis Anissegos.

Via the means of a theatrical language where stage and sonic elements are intertwined in unpredictable and novel ways, the new production by Michail Marmarinos and Akillas Karazisis sets out to approach the Greek War of Independence as a field of constant critique and self-critique, thus putting forth a dramatic treatment at once playful, poetic and historically informed.

The production is made possible through a grant from the Stavros Niarchos Foundation (SNF) [www.SNF.org] that supports the Greek National Opera’s artistic outreach.

The Greek War of Independence has often been seen as the beginning of the modern Greek state’s tribulations. Critique of the national narrative bolstering the revolutionary struggle that began in 1821 was part and parcel of the process of its formation. The Greek War of Independence was not implemented by a uniform and cohesive front, as is evident from the fate of the revolutionary heroes, many of whom met with derision and condemnation during their lifetime, the disputes between factions and the rivalries among the Great Powers; rather, it was constituted by many different approaches, which led to a commensurate proliferation of narratives.

Critique (of opponents, of Others, of companions) is a constituent part of the modern Greek state. This agonistic as well as antagonistic dimension of the Revolution and its reception in the continuum of modern Greece is accentuated by this commission to directors / performers Michail Marmarinos and Akillas Karazisis and their valuable collaborators by the GNO Alternative Stage. Their new project creates a bold, diverse and creative paradigm, that develops by recovering lived experience from past evidence. Lived experience of dead people and of perished human collectivities, into which only performative reconstitution can breathe new life.

In the production
Kolokotronis Contemplating the Future
Women Preparing for the Revolution
and I’ll Be Thinking of Something
Michail Marmarinos and Akillas Karazisis bear witness to faraway persons, events and locations in the present tense. Onstage, they collect “slices of life” coming from another time and represent them in the theatrical “now”. They emphasise successful and unsuccessful attempts of encountering the past and present onstage the discoveries of their “excavations”. They treat their material like sketches or unfinished canvasses, that demand the intervention of live participants in order to be completed, commented upon or given meaning. The actors present onstage, with their voices, bodies and being, fill the historical revelations with living colour, formulating their own version of the genealogy of the present.

A stage production made out of thoughts and ideas, narrations and songs, poetry, dance and painting, faces and bodies, light and sound – out of what is enunciated and displayed.

Among other things, the production uses the received texts of the era as evidence of a “multilingual” reality. Here is an unruly, rich body of material, written in all kinds of dialects and languages and constituting an immediate, synchronous reaction to the historical events.

Composer Antonis Anissegos, who, during the performance, was constantly trying out new ideas on piano and electronics, attempting to “re-act” in an improvisatory way to what happened onstage, comments: “The role of the music in the show is something we discovered every day from scratch, always following the narrative and content. In our case, we had a very charged, complex and enormous theme. The production’s music is rather focused in its psychological and emotional aspects. At the same time, it converses with the actors’ musicality and inner rhythm. The collaboration with the directors, as well as the actors, was ideal. A mental red carpet was laid out on our rehearsal space – everyone was welcome to contribute to the work’s creation, to try out our ideas. Each one of us had the option to influence the development of a scene. Other ideas were born during the breaks, when we were simply ‘jamming’. Finally, the two directors composed a narrative out of the processed material.”

Regarding their method of juxtaposing partial histories to the narrative of official History, the production’s directors and dramaturgs Michail Marmarinos and Akillas Karazisis state the following: “Repulsion for official History is fundamental. Education and national narratives have taken care of that. On the contrary, thirst for oral or written accounts, paralipomena, evidence, in a word: for fragmentary History –histories– is immense. This is our material and our method. That History may open itself to fiction. That it may function uninhibitedly as a psychotropic substance, transporting us (almost physically) outside the barrier of self-evident and self-fulfilling reception. By clothing ourselves in the words and clothes of the heroes and authors, we attempt (sometimes awkwardly, timidly) to explore the possibility of a stealthy entry into the root of impression, the point where the past becomes an expanded present. That is sufficient. For us, for History, for the theatre.”

Akillas Karazisis Stage director, dramaturg
He was born in Thessaloniki, in 1957. He studied in Germany. Since 1985, he has worked as an actor in theatrical productions in Greece and in Germany. He cooperated with directors such as Yannis Houvardas, Michail Marmarinos, Victor Ardittis, Nikos Hatzopoulos, Dimitris Karantzas, Argyro Chioti, Alexandros Efklidis, Milo Rau, Karin Henkel, Albrecht Hirche, Heiner Goebbels, Thomas Moschopoulos etc. Since 2006, he has directed for various theatres in both Greece and Germany, such as National Theatre of Greece, Greek National Opera, Landestheater Tübingen (LTT), Landestheater Altenburg etc.

Antonis Anissegos Music, piano, electronics
He has been living as a composer, pianist, improviser and electronic musician (alias “unu”) in Berlin since 1998. He participated in concerts in Europe, Asia, USA and Central America.
Anissegos is a member or regular guest at the Ensemble Adapter, Ensemble European Music Project, Ensemble Junge Musik, the Trio IAMA, the groups Grix, KAYA (with butoh-dancer Yuko Kaseki), ΣΩΜΑ, Card Castle, best before unu and Blindsight. He collaborated with the video artist Erika Matsunami (OIO, 2005–2009), the dance group adLibdances (2007–2011), Theater Thikwa (since 2004) and the music theatre group Novoflot (since 2017). From 2006 till 2018, he has been teaching Improvisation at the Music Village Summer Workshops in Pelion, Greece. His compositions cover the full range between solo and orchestral music and include incidental music for theatre, dance and film. In addition, he has released more than seventy CDs.
www.enstase.com

Kathrin Krumbein Costume designer
She was born in Germany, educated in Interdiciplinary Cultural Studies at University of Hildesheim, Fine Arts at HbK in Braunschweig, and Museum studies at New York University. She lives in Berlin and works as stage and costume designer as well as painter and writer. Under the direction of theatre makers such as Albrecht Hirche, Florian Hertweck, Lars-Ole Walburg, Niklaus Helbling and Robert Lehniger many plays had been staged with her contribution in Germany, Switzerland, Austria and Greece (at theatres such as Schauspiel Hannover, Munich Kammerspiele, Theaterhaus Jena, Volksbühne Berlin, Staatstheater Aachen, Luzerner Theater, Theater Basel, National Theatre of Greece, Schauspielhaus Wien). In 1991, she worked for the first time with Akillas Karazisis, followed by many further cooperations with him, Michail Marmarinos and Yannis Houvardas.
Travelling costs are funded by Berlin Senate Department for Culture and Europe.
https://kathrinkrumbein.wordpress.com/

Alekos Anastasiou Lighting designer
Born in Athens. He received degrees both in electronics and the cinema. For many years he has worked in the film and television industries. As a cinematographer, he has worked in feature films and short films, TV series and in several informative and entertainment programmes and documentaries. As a lighting designer, he has worked in approximately 500 theatrical productions, in performances given in theatres mainly located in Athens, for National Theatres as well as for commercial, mainstream and independent theatres. In addition, he has taken part in many theatre festivals and events in Greece and abroad. He has worked with the majority of renowned Greek directors and choreographers. He received numerous awards.

Lambros Grammatikos Performer
He was born and raised in Ioannina. He is a graduate of the “Iakovos Kambanellis” Drama School (2016) and an Electrical and Computer Engineering graduate of the Xanthi School of Engineering (2012). He has been a Greco-Roman wrestling athlete and has been interested in dance and music. He has attended acting seminars with Michael Marmarinos, Maria Kechagioglou, Akillas Karazisis and others. As an actor, he participated in the productions The Art of War (2020, dir. Vicky Kyriakoulakou), The Seagull (2019-2020, dir. Giannis Paraskevopoulos), Erotokritos (2016-2018, dir. Nikos Diamantis, Ioanna Makri), The Shark's Tooth (2018, dir. Zoe Drakopoulou), Easter Island (2017, dir. Lysandros Spetsieris). He has also worked as an assistant director in the productions The Browning Version (2014, dir. Eleny Scotes), The Glass Menangerie (2015-2016, dir. Eleny Scotes), The Dance of Death (2015, dir. Dimitris Katalifos, Eleny Scotes).

Evangelia Karakatsani Performer
She was born in Athens. She graduated from the Drama School of the Athens Conservatoire in 2011. She holds degrees in voice, harmony, counterpoint and fugue. She participated in children's theatre productions directed by Karmen Rouggeri at the Greek National Opera. She cooperated with Thomas Moschopoulos, Lydia Koniordou, Akillas Karazisis, Michail Marmarinos, Nikos Karathanos, Konstantinos Arvanitakis, Yannis Moschos in productions at the National Theatre of Greece, Onassis Stegi and the Municipal Theatre of Piraeus. She is a founding member of the 4Frontal theatre group.